and more character than you’ll ever have

I was thinking (again) of watching Blade Runner for this blog. It was on my 1982 list, even though that was a bit of a cheat. I did not see it in the theater, and am not sure at what point I first saw it on cable. I did make a habit of watching it whenever I caught it, though, and bought myself a VHS copy when I was a teen. It's the kind of film that made an impact but doesn't quite fit this deconstruction.

I cut it from the list while I was driving home from seeing the Oscar-nominated documentary Faces Places. I was going to skip ahead a movie to watch something more fun today, but apparently I neglected to borrow that fun one on DVD. It may actually come late in the order instead of early. So then, we arrive at today's film which, honestly, might be enjoyable. It has been a long time since I've watched it, and I only really remember it in fits and spurts.

The film is An Officer and a Gentleman.

Roger's words give me hope:

"An Officer and a Gentleman" is the best movie about love that I've seen in a long time. Maybe that's because it's not about "love" as a Hollywood concept, but about love as growth, as learning to accept other people for who and what they are.

That flows right into what I was talking about yesterday and so many other times in this blog.

But, I'm struck right away by how much this film is probably not going to be like Top Gun, despite tangential settings; of course, they come at very different points in the 80s. Then, out of all things, the font of the main titles grabbed my attention. I don't know what that font is called, but it seems like it was common at the time in front of dramas and I think it was the very same font as On Golden Pond, which got me headed over to IMDb to see who was the titles designer. Not the person we pay much attention to most of the time, to be sure. (Also, not the same designer as On Golden Pond, by the way. 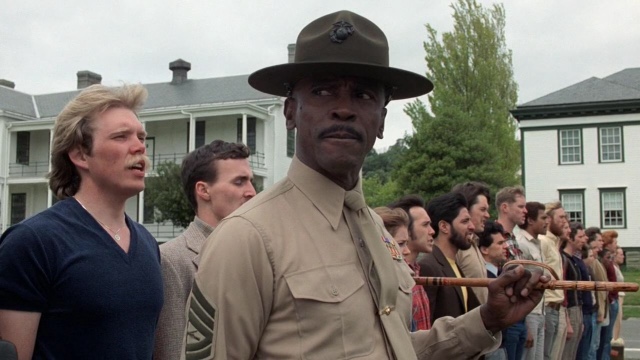 You've got some of your obvious boot camp type stuff, but the subtle details make this stand out. Mayo (Richard Gere) finishes the obstacle course first then sits by himself while everyone else finishing cheers on those remaining. Sergeant Foley (Louis Gossett Jr) notices but doesn't comment. The flashbacks that start the film suggest something out of the ordinary.

And, the film is in no real rush, which is something I like now, something I probably wasn't the biggest fan of when I was six.

The lack of words today isn't coming from the usual comfort of an old familiar film, or from me getting over being sick half this past week, but because it's remarkable how effortlessly this film offers up numerous characters with sometimes only the shallowest of interactions and they feel like fully-fleshed people.