the only thing that separates us from the god damn animals

Then again, Sid's sense of ownership is problematic. He's got the girl back home, and fully expects to marry her after OCS. Secure in that expectation, he gets together with Lynette the first week of a 13-week program, and she doesn't turn down his marriage proposal until the 11th week. Lynette kind of has a point after Paula says she'd be "trapping" a guy by getting pregnant... Here's the context.

LYNETTE: Would you let yourself get pregnant?

PAULA: No way, Lynette. Would you?

LYNETTE: Well... I never used to think I'd do something like that. But, I don't know anymore. Nine weeks just ain't long enough for a guy to fall in love with you.

PAULA: That doesn't justify trapping him or getting pregnant. I can't believe you'd think that. It's real backward.

Here's where Lynette starts to make her point.

LYNETTE: It ain't more backward than the way these hotshot assholes use till they've had enough, then ditch us like we's trash. Don't you ever feel used, Paula? Don't you feel the sons of bitches ought to be paying for our troubles?

Of course, Paula is about to chase after Mayo later when he has cut off contact, until her mother talks her out of it. She's not quite as resolute as she presents herself in this exchange with Lynette. Of course, she gets to pass judgement because she's in love. What she's got with Mayo is real. Because the movie says so.

We can believe it, or not, but ultimately, the movie tells us that Mayo and Paula are in love and Lynette and Sid are not. Simple as that.

And, then there's the monkey wrench that I have got to wonder what I thought of it when I was a kid, watching this movie. Sid does the "right thing" (after offering to pay for the abortion, of course) in choosing to take responsibility for Lynette and her baby but this gets twisted up in his (Possibly? Probably?) wrongheaded decision to DOR. It gets twisted up in his personal failure and his suicide. And with his inability to make good on whatever promise he has made to Susan back home. (Remember, his promise to her, whatever the specific terms, is because she was his brother's girl, before he died in Vietnam.) For a "bodacious set of ta tas" he fails in his military career and fails in his family future (in two different ways). This is where An Officer and a Gentleman twists its politics. The film plays with conservative values about men and women and families. And, the idea that casual, premarital sex would screw with those values is key. But then, the film rewards that same casual, premarital sex between Mayo and Paula with the fantasy happy ending. Aside from a little extra screentime and Paula's own word, why should we really judge the two relationships as particularly different from one another? Is it so hard to imagine that Sid and Lynette eventually do have a conversation about their brothers who died in Vietnam, maybe even have that conversation lying naked in bed after some frank talk about getting a towel?

I mean, the film is nicer to Paula and Mayo than it is to Lynette and Sid. It is believable that Mayo's not looking for a girl and Paula's insisting she isn't really looking for a husband, like the Puget Deb she clearly is, might turn into something deeper than Sid's aim for that "bodacious set of ta tas" and Lynette's willingness to trap him with a pregnancy would. And, because the screenwriter put the situation together well, it's interesting that Winger plays Paula as if she maybe really doesn't want to snag a husband at any cost. She dreams about it, but she genuinely helpful when Mayo laments, "Guys a lot smarter than me been dropping out like flies." Excitedly, she replies, "You got to say you're going to do it. Got to program yourself. It'll happen. You've just got to see yourself making it. I read this article in Cosmo about that. I swear." Like maybe she's been at this for so long (though she's only 22, there is another class starting as this one is ending, so I guess the cycle resets every 3 months) that she's become some other kind of Puget Deb; she's there to be supportive and help her man make it to graduation. If he happens to take her away at the end, that's a bonus. She even makes him breakfast.

So then, what is the film telling us? That love conquers all? What if we believe Sid when he tells Lynette, "I have never been happier in my life than I have in the last seven weeks. I've never felt so relaxed, and I've never felt so loved for who I really am. Lynette, marry me. Make me the happiest man in the whole world."? If we believe Sid, what then? Love conquers all as long as you're honest? If we're taking only what is on screen, then we never see Lynette tell Sid she's been to the doctor; in fact, we see her specifically telling him that she doesn't know if she's pregnant, her period is just late; it is Sid who tells Mayo that Lynette has been to the doctor. Lynette doesn't lie to Sid. And, when he thinks she actually is pregnant, he "steps up" to marry her and take care of the kid.

Paula showing Mayo the photo of her real father, and then telling him "I didn't have to show you that picture if I didn't want to" is manipulative. Mayo is pulling away, and she's getting desperate. Her more wholesome, honest thing isn't working. She's guilting Mayo with her parents, who he just had dinner with, just like Lynette later guilts Sid with possible pregnancy. Just a couple minutes later in the film is Paula's mother talking her down. She has been there. She lost her man.

The movie plays the romantic angle with one relationship, and gives the other less screentime, less feeling, so it's simpler for us to see that it fails. Which is a nice lesson in filmmaking, but I can only recognize that in retrospect. What the movie tells you, ultimately, is the counter to that random woman at the factory, Bunny. "Comes a time right after survival training," she explains, "they start thinking they can make it without you. Suddenly, they stop calling." Meanwhile, Mayo has rejected Paula's phone call. The movie's point about men and woman is that they need each other to survive. Even Paula's mom found herself a different man after the one she lost. And, whatever Mayo's father did wrong all those years ago, after his wife (though I guess the film doesn't say they were married) killed herself, fills that hole with his career, with his drinking, with whores. Fill that hole with something better, the film tells us. If you've got the opportunity at something real, grab it. Don't give up everything else for it. But, grab it.

And, as I'm sitting here trying to find my conclusion, Mayo helps Seeger get over the wall and it occurs to me that His rejection of Paula (and subsequently seeing her moving on with another guy at the bar) is something he had to do, too, in order to actually be a leader. To be a team player. Of course, right after he helps Seeger, he and Sid talk in the mess hall, and Mayo says, "You got responsibility to yourself, first." But, he has just proven that wrong with Seeger, and in the very next sequence will prove it wrong again when Sid breaks down in the oxygen deprivation drill. And when he thinks Foley asked for Sid's DOR.

And, that's a weird step. Mayo has to reject one of the big things he's got going for him in order to 1) succeed at the other and 2) realize he needs both.

Back when I was a kid, it was just the romance of love and military service. Less jingoistic than some other 80s films, but leaning into family and country and good old conservativism. 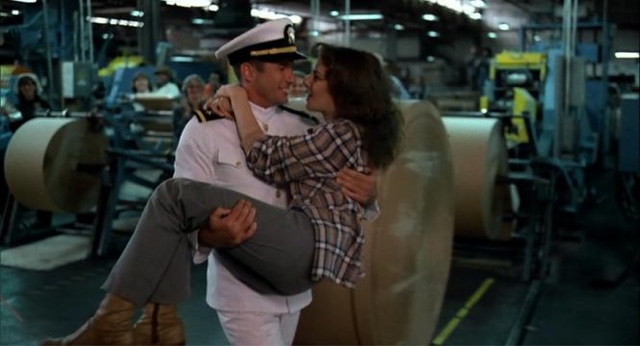