the best time in your whole life

- February 12, 2018
I don't think that I knew that Bridgette Andersen died from a drug overdose back in 1997. Back when I was a kid, her Savannah Driscoll was basically an absolute innocent. And, while I know that Savannah Smiles is a deliberate mix of childish innocence and tragic circumstance, I remember the film as quite innocent even in its worst moments...

We start with a prison break, of course. Would be totally serious but there's just enough silliness with the camouflage car and the branches sticking out of it, and it being amphibious. Plus, Alvie (Mark Miller, who also wrote the screenplay) is getting "paroled on Friday" but Boots (Donovan Scott) breaks him out anyway.
Boots tries to steal a chicken, and there's an old lady who shoots at the two of them with a shotgun with very little prompting.
And then we meet Savannah (Andersen), sitting alone on the stairs as her parents host a dinner party. Savannah's father Richard (Chris Robinson) is running for senate with little time for his daughter. His wife Joan (Barbara Stanger) isn't much better (though she at least makes an attempt to say good night to the girl). Savannah watches an old episode of The Little Rascals, Alfafa and Spanky talking about running away to teach their parents a lesson. (Their final straw is having to take dancing lessons.) Savannah nods. She's got a plan.
Meanwhile, Alvie and Boots steal a junker of a car and rob... well, a junker of a small town convenience shop. They get only $18.43, and some food. Their getaway car won't start, Boots accidentally shoots its tire, and they barely get away. They are, at this point, quite obviously hapless. Not so bad as an update on Amos Tucker and Theodore Ogelvie, but close.
Savannah writes a note to her parents, packs a suitcase, and leaves while they host a garden party. Her note blows under her bed when she closes the door, setting up the rest of the film. 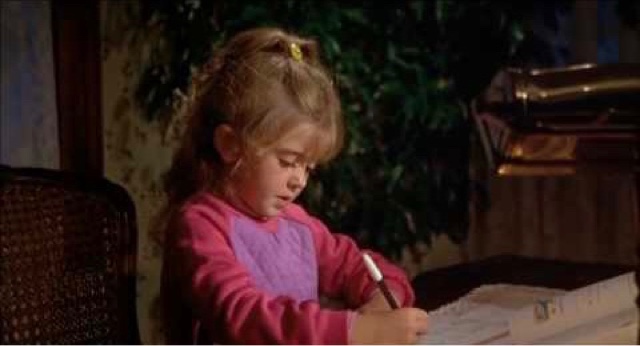 She is ostensibly heading to the carnival/park with a friend but she hides her suitcase in the back of the station wagon. As Miller's real-life daughter Savannah* tells a fairy tale story and then they play hide-and-seek, Alvie and Boots arrive, Boots steals a purse, Savannah (Andersen, not Miller's daughter) retrieves her suitcase and climbs into their waiting junker of a car, and 25 minutes in, we're at plot point one.

Boots buys ice cream--they still don't know Savannah's in the backseat--but Alvie doesn't want any and throws his out the window, hits a motorcycle cop passing by. They learn Savannah's with them because he says hi to her. It's a scene ripe for tension plays for humor. Which is really the way a lot of this movie works...
And, Savannah has one of her best lines: "Thanks for not turning me into the cops."

And then I just watch the movie, as is often the case returning to movies I haven't seen in a while. And we get to plot point two--when Peter Graves' character (I think he's FBI) has his men surround the house, and one of them takes a shot, even though at this point Boots has told Richard Driscoll that he and Alvie don't even want the reward money, they just want to return Savannah to her parents.
And then I got distracted briefly, thinking about tomorrow's topic and someone's getting married, and I think I missed a whole scene of explanation... Ah, this is how Boots and Alvie get out of town to make the final exchange. Forgot about this part. And, structurally, I'm not sure this last act serves much of a purpose. The guys with guns surrounding the house could have led to the same sort of downer ending that we get... Except--
No, I'll get to that tomorrow.
blog bridgette andersen childhood deconstruction every day film films groundhog day project movie movies reconstruction savannah smiles