Sometimes, I see a new movie and I wish I dealt in something more like reviews. Less of this unstructured discussion. This afternoon I saw Black Panther and I wanted to come home and fashion a brilliant review that celebrated the statement the film makes for Africans and African-Americans, and indicted white folks for, well, all of the shit they've done and do, and for their paranoia regarding Black Panther itself. I saw a post this morning--on Twitter I think... Nevermind the vagueness; I looked it up to check. It was the Twitter handle The Trump Train. They posted this:

It's very fitting that the same people who claim to support equality and diversity also glorify a movie that idolizes black supremacy and establishing a black-only ethnostate.

There was also a line about liberals and hypocrisy but it's that bit about Black Panther that gets me. Even before I saw the movie, and before I saw replies on Twitter confirming it, I knew that Black Panther is quite explicitly about the opposite of what The Trump Train is suggesting. But, you know, nevermind the truth, or actually seeing a film before you pronounce its message. There is no "black supremacy" at play in Black Panther quite simply because the film takes place in Africa, in an African nation full of black people. The only "supremacy" comes from that basic fact that the biggest fantasy of Wakanda is that it survived European colonization of Africa and has actually retained its identity and not been devastated by the slave trade or colonial oppression or even an invasion of Abrahamic religion. Like the basic gist of the phrase "black lives matter" there is no suggestion in Black Panther that somehow these Africans need to rule the world. In fact, at best, that is the notion of the film's villain, and even that not quite.

(My favorite part of the film--and here, we get into SPOILERS--is that the central villain is not really wrong, it is just his immediate approach that is problematic.)

And, there is no "establishing a black-only ethnostate"; rather, in case white folks missed it, Africa used to be full of places one might call black-only ethnostates. But then, we moved in on them, picked them apart, sold their people, stole their resources, and devoured their spirits and their souls.

But, the white supremacist capitalist heteronormative patriarchy is quite easily frightened. Celebrate people of color for even a moment and, of course, you're promoting the destruction of the powers that be, you're idolize get black (or Hispanic, or whatever) supremacy, and you're supporting the establishment of a black (or what have you)-only ethnostate. Because, it's all black and white (metaphorically and literally), a zero-sum game, with us or against us, us against them, and all the obvious bullshit that comes with that.

In Black Panther you have, on less of a statement level, a good Marvel film. It's solid enough, it offers depth of character even to numerous smaller parts. Like Rogue One, the film seems to assume that Forest Whitaker can offer depth even if the script doesn't provide him much, and it's wrong about that. Similarly, Angela Bassett's Ramonda (and the other elders in Wakanda) are more abstract presence suggesting a culture that trusts its older members (a theme suggested better by T'Challa's (Chadwick Boseman) and Erik's (Michael B. Jordan) ventures to visit the dead) than real characters. But, then there's Okuye (Danai Gurira), Nakia (Lupita Nyong'o), W'Kabi (Daniel Kaluuya), Shuri (Letitia Wright), M'Baku (Winston Duke), Ross (Martin Freeman), and even Klaue (Andy Serkis), who are all well-embodied characters with... Well, if not explicit motivations, a definite sense that they have motivation and a reason for being.

You have a plot that is less superhero and more James Bond, but with a clear political and social commentary about the world. And, it fits snugly into the ongoing MCU story as well. 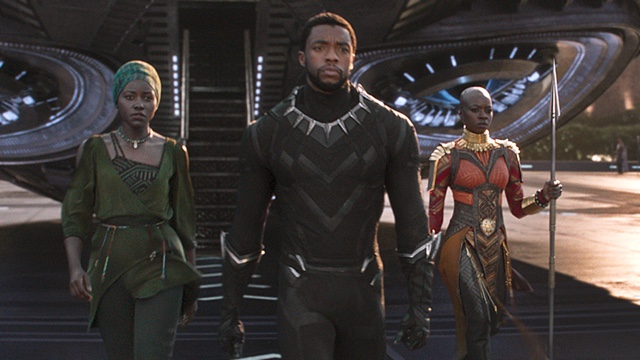 You also have a mainstream film--that will do quite well at the box office--that is not full of white people. Hell, it's not even full of men. While there are men all over in the background, and the leads are male, there are no less than three female roles driving the plot, expressing individual agency, and duty, and coming into conflict with each other and with the men. One film full of black people and some white folks panic. And, honestly, it's a little pathetic. It's also perfectly understandable because when you are raised thinking you matter more than you actually do, of course, you will be taken aback anytime anything shows up that (seemingly) detracts from your power.

Bleeding-heart SJW liberal that I am, here's my thing: white men had their time. If women and people of color (and women of color, because intersectionality matters) are getting a bigger piece of the pie, good for them. We've ruined the world long enough.

As Jamil Smith points out, in a nice piece for Time--"The Revolutionary Power of Black Panther":

If you are... white, seeing people who look like you in mass media probably isn't something you think about often. Every day, the culture reflects not only you but nearly infinite versions of you--executives, poets, garbage collectors, soldiers, nurses and so on. The world shows you that your possibilities are boundless...

Meanwhile, you've got Fox News' Laura Ingraham going after LeBron James, calling him "barely intelligible" and "in-grammatical" then playing a clip where he's rather clear. And, I'm one of those who figures there's good reason for the way she approaches this. Hint: it's racism, whether it's ingrained by our culture or something more nefarious. Her statement made afterward in her defense was basically that she has attacked white people before, too, so she couldn't possibly be racist.

INSERT: Me, rolling my eyes.

As a film, Black Panther is good. It isn't great. As a statement, though, it's powerful. And, I would rather more of us celebrate it than detract it.