can i believe what i am seeing?

I often get lost as these old movies from my childhood play, but I didn't expect to get lost in The Pirate Movie as soon as it got started. But, "Victory" starts playing over pirate ship battle footage and I'm in. And then the main plot gets going pretty quick and Ninjas attack the pirate ship and it's on. This was what really got me when I was a kid, the action and the romance. I talked about the military side of An Officer and a Gentleman was just as much rooted in fantasy as the love story yesterday--but the actual action in something like this is an easy in for a kid. Pirate adventure, plus ninjas, and later cops, plus the romance and songs.

I had yet to see a production of The Pirates of Penzance when I first saw this film, though I would see it later, so I didn't know a lot of the basic specifics being spoofed. But, unlike some more recent spoof films, this one keeps a main plot that makes sense going the whole time. It isn't just a bunch of jokes. There are a lot of jokes--and a lot of them I didn't get the first time I saw the movie--but the jokes are brief non sequiturs most of the time. 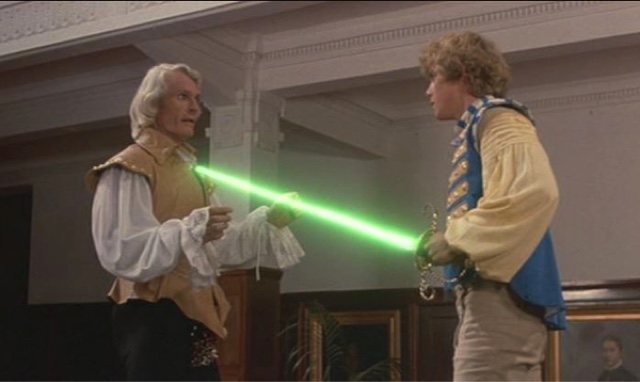 Then, there's stuff like that. Anyone reading this blog should know I grew up on Star Wars. Throw a lightsaber into the mix that is already so awesome for a kid like me, and this movie was everything for a while.

Not that I didn't leave room for every other movie that was available to me. In theaters, on tv, on video. Things my mother might rent often were things that shouldn't have appealed to me, but I wanted to watch anything and everything.

More on that tomorrow.