who better than a crafty mountain man

It barely matters that The Man from Snowy River is Australian; the messaging fits right in with American films of the time--a lot of masculinity on display in various levels of toxicity, men being men, women being submissive to those men even when they're not. Seriously, Jessica stands up to her father, he hits her, and she runs away and falls off a cliff to be rescued by Jim.

(And, to be fair, as I have learned just now online, Australia also had a part in Vietnam, and in the 70s was undergoing a wave of nationalism.)

And, there's Jim yelling "NO!" After his father dies. This movie is full of melodrama and corniness.

But, 1) it still strangely works really well, even after all these years. And 2) I'm actually not in the mood to complain about a film. I spent the day seeing a whole lot of short films (all 15 Oscar nominees plus three of the animated runners up). I've got a couple documentary features (that happen to be on Netflix already), one animated film (that's currently at a theater over in North Hollywood), and two foreign films (at least one of which will be at the Royal in Santa Monica next weekend) and I'll have seen all the Oscar nominees prior to the award ceremony again. 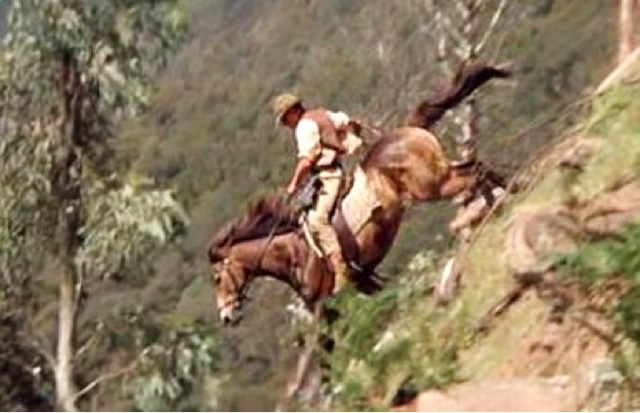 So, I sit here watching The Man from Snowy River and realizing that, while the film includes a lot of problematic things--about feminist notions, for example--but still works because it dares to be about those things. Jess falls down that cliff not specifically because of her childish behavior, running away, but rather inclement weather and a horse pulling against her. Nature itself is what puts her down there, and then the mountain boy rescues her, not just because he's the knight come to save the princess but because he is closer to that nature than she is. Harrison believes he's been raising his twin brother's daughter all these years so there's a complex array of shame and guilt and anger and jealousy wrapped up in his need to see her become a more proper lady than he thinks her mother was. He's not just a misogynist ass; it's more complicated than that. However much it is steeped in nationalist ideology and masculine mythology, Jim as well is more than just a boy trying to be a "man"--the distinction, by way of Harrison and Spur, between the men of the bush and the men of civilization, drives him more than something more specifically sexist. The film actually makes and effort to explain these people rather than leave them stereotypes.