is it not your life to decide?

I will be up front about this. I am watching Suburban Sasquatch again rather than get back to High Road to China. It's just so fun.

Also, I saw Every Day today's--long time readers of this blog might recognize the name. I wrote about David Levithan's book back when it was still Groundhog Day every day. In particular, I quoted this bit:

What is it about the moment you fall in love? How can such a small measure of time contains such enormity? I suddenly realize why people believe in deja by, why people they've lived past lives, because there is no way the years I've spent on this earth could possibly encapsulate what I'm feeling. The moment you fall in love feels like it has centuries behind it, generations--all of them rearranging themselves so that this precise, remarkable intersection could happen. In your heart, in your bones, no matter how silly you know it is, you feel that everything has been leading to this, all the secrets arrows were points here, the universe and time itself crafted this long ago, and you are just now realizing it, you are now just arriving at the place you were always meant to be.

Suburban Sasquatch is not a love story, but in the end Rick and Talla do head off together, ostensibly to fight more monsters or whatever. The terms are vague. But, as if this were a product of Hollywood and not an independent feature out of Pennsylvania, they do get together romantically. Talla starts the film with a grander purpose--to rid the island (?) of monsters, to protect people even if it means she can never have a normal life. Meanwhile, Rick dreams of a Pulitzer, but he's stuck in this little town... Not unlike Phil Connors in that respect, I guess. He wants for bigger and better things. Jackson (Dave Sitbon) says Rick has his head in the clouds but his feet on the ground, and predicts that he'll have no future as a reporter. Rick feels stuck. Talla convinces him to just go for it. And to fight the Sasquatch.

The thing is, while the script is lacking in much depth, and several scenes seem horribly ad-libbed (like the opening scene with the couple driving through the woods to go to a party), it's trying to say something about a person's purpose. Timmy's mother is taken because she protects her son. John is keeping the story details from Rick because he (John) wants personal revenge against the Sasquatch. Rick wants the big story to get out of Woodstown, Pennsylvania. Talla has her greater purpose and helps Rick achieve his. They have several poorly crafted conversations about it. The Room is about loyalty and love. Troll 2 is about hospitality and family. Suburban Sasquatch is about responsibility and purpose. Bad movies may be bad, but at least they (sometimes) have something to say. Why else would people rope in everybody they know and spend all their spare time filming things like this? They believe in it. Dave Wascavage, director and writer of Suburban Sasquatch puts Rick's grandma (Loretta Wascavage, I'm guessing Dave's own real-life grandmother) into the film for a reason. She points Rick to God, Rick asks God or Nature for a sign, and Steve calls him about the latest dead body.

John's big flashback with the Sasquatch taking his wife Celia (Michelle Hanna) includes a notable detail. Celia wears a cross on a necklace, over her heart. When the Sasquatch appears in front of her on the porch, Celia grabs at the cross. The symbolism is almost too obvious here. Timmy's mom--driven by love. John--driven by love. Rick--eventually driven by love. (Although when he moves to kiss Talla, the thunderbird interrupts with a sign because the Sasquatch is in town again. He can't even do that right.) 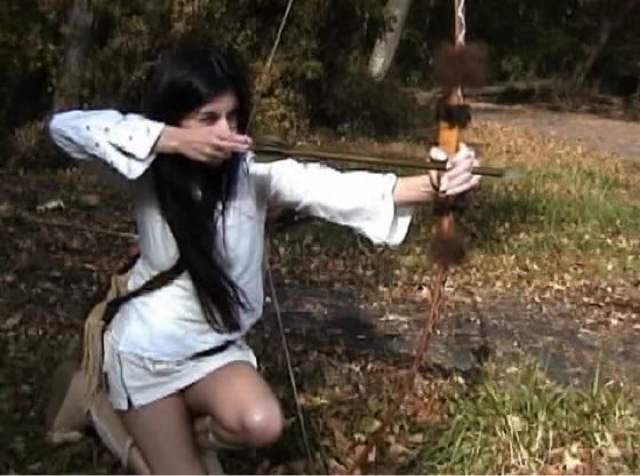 The film covers what seems like a few days but a few lines of dialogue suggest is a few weeks. Yet, no one has more than one outfit, except for Talla. Rick wears the same jeans and the same t-shirt through the entire film. Talla wears a skirt and blouse (that approximate a native dress, sort of) in the first half of the film. Then she changes into pants and a tank top, becoming more civilized in appearance, and also more masculine. This fits with my comparison of the film to a slasher film. She's the Cloverian final girl, except Rick has to save her in the end. Which might be problematic except that he can only save her by finally embracing her beliefs and copying her native methods of healing that she previously used on him. Structurally, we've got a slasher film, but we've also got something much bigger--the encroachment of modern civilization into nature, and our responsibility to take care of one another.

But, Rick has a relapse. Talla packs up to leave, to find her next battle. He asks her to stay. And, she sort of does. The actual ending suggests that she will stay with him, though he does offer to go with her, she's got some lame bit of dialogue about how this might be the next battle. Something about love being a battle against nothing, or nothingness. It's the big ending of the film and the scene is not well miked. They walk off together, but I think she's going with him and not the other way around. It's the Hollywood thing--the man and woman at the center of the story must end up a romantic couple because that is how we know the universe is in order.

Still, I like it imagine that a few miles away, another Sasquatch is killing people but Talla is now neglecting her tribal duties because she decided that her next battle was love.