it was always a wreck

High Road to China makes sure pretty quickly that we understand it's the 1920s. Old cars, men in suits, and flappers. Vincent Canby explains, High Road to China "is set in a sort of mythical 'Roaring 20's,' which can be immediately identified because a young woman is seen doing a mad Charleston in an early scene."

Also, some guy gets shot in the opening scene and I have no idea who he was. 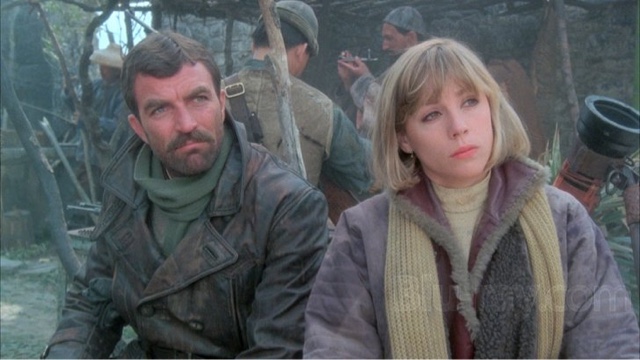 Eve (Bess Armstrong), the young woman dancing the Charleston, needs to find her father before he dies or his business partners will have him declared dead and take his business. She needs a plane for this and hooks up with O'Malley (Tom Selleck). That's the setup. Simple. She's a "society dame", he's an alcoholic. They head (initially) for Afghanistan (from Istanbul) and, well, basically, this is an adventure plot with a romance sprinkled in.

Half an hour in, I gotta agree with Roger Ebert's conclusion:

"High Road to China" is not a terrible movie, but it's a lifeless one. It follows some of the forms of "Raiders of the Lost Ark" without ever finding the comic rhythms. It's directed at a nice, steady pace, but without flair and without the feeling that any things being risked. And it tells such an absolutely standard story that we never fear for the characters and we hardly ever believe them.

We can almost believe O'Malley when they land... somewhere, a British airfield, and he's recounting tales of being a pilot in the war, and someone asks him about Verdun. He got 12 kills in one week, which sounds impressive, but he doesn't speak of it proudly. He explains that the Germans had nothing but schoolboys to send out by Verdun, so he was killing schoolboys who couldn't even fly loops. It's a nice moment, with more import to it than, say, that guy Charlie (Michael Sheard) who works for her father getting killed. It could have been even better if the rest of the film felt like it was trying to be as serious. 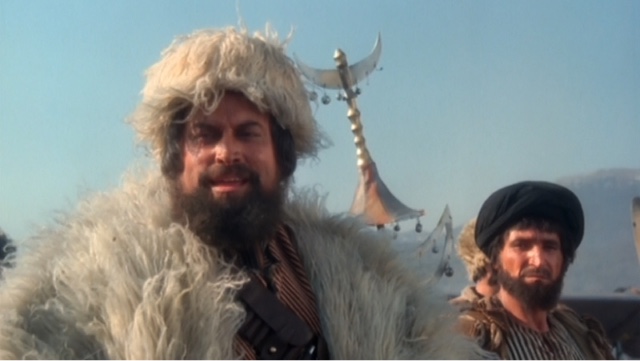 And, I am having trouble gauging just how offensive the portrayal of locals in... Wherever the next stop is. Brian Blessed's character is called Suleman Khan, but the film doesn't tell us where we are. Hell, I only knew it was Istanbul in the beginning because the Internet told me so. I guess we're in Afghanistan at this point because Khan tells Eve that her father is dead. Some woman--maybe Khan's wife? Seriously, this film does not make relationships or locations very clear. Anyway, this woman tells Eve that her father is actually alive.

(Regarding the offensive portrayal, Canby suggests, Blessed's portrayal "recalls the racial and religious prejudices of an earlier era of movie-making." i.e. casual racism and cultural simplification, because what do we care?)

Meanwhile, it feels a little too much like the point of this movie (not the point of its plot, mind you) is for O'Malley to show Eve that her society life has kept her from knowing how the world really is. He slaps her as a display when Khan gets mad. He blows smoke in her face after being offered a fortune to sell her. Eve is a selfish brat, as O'Malley sees her, and it feels like the movie agrees. But, it hasn't really made the argument very well. She is a capable pilot. Her tactics with the English commander work just as well as O'Malley with the guy's men. She manages to talk to Khan's wife (?) after he talks to Khan. It's like the movie wants to tear them both down while simultaneously telling us how capable they both are.

Finally, we hear some specific locations--Eve and O'Malley are on the way to Kathmandu, India--in an interlude back in Istanbul with Bentik (Robert Morley), the partner of her father's who wants her dead. These scenes serve little purpose. With a better director or better actor, Bentik would be less buffoonish and more frightening... I'm actually imagining Christopher Plummer a la All the Money in the World in the role right now and that works quite nicely.

For some reason... Assume that most anything in this film can be described with a sentence that starts with those words: for some reason. For some reason, once they're in India (?), Eve gets sick. O'Malley holds her in his arms at one point, and she gets angry at him when she wakes up with him in her bed. But, none of this would happen if she hadn't randomly gotten sick. It's cheap. There are better ways to get these characters to clash.

Aliya Whiteley, writing for Den of Geeks points out the score as one of the movie's failings. It doesn't "gear you up to take on the world", Whiteley explains. It's kind of boring, I would say. And, the one music line that keeps repeating feels like a rejected knockoff of the theme to Superman. [What is probably the "love theme" later is actually kinda nice.]

When one plane is destroyed, they leave Struts (Jack Weston) behind, and I realize that his character wasn't very useful. (Notice, I haven't mentioned him before now.)

Some nice flying footage over the Himalayas plays, then we're with Bentik again. And finally, China. And Eve's father is played by Wilford Brimley--and since I already mentioned Roger's review, I should mention that he takes the time to explain who Brimley is, so I guess the guy was not as much a household name just yet in 1983 as he would be later, particularly after the tv series Our House, and very much after all of his diabetes commercials. It's a nice performance, and like Private Ryan so many years later, he has less interest in being rescued than fighting the local war. (Which is happening for some reason.)