as though we’re incredibly stupid

First reactions to Staying Alive after many years of not watching it: I still know this song, and wow, Kurtwood Smith is in this. [Alas, he disappears quickly.] Roger Ebert called Staying Alive "a big disappointment... [not] really a movie at all, but an endless series of musical interludes between dramatic scenes that aren't there... a Walkman for the eyes." I grew up on this movie and not it's predecessor, Saturday Night Fever; I'd seen Saturday Night Fever, of course, but for whatever reason--probably because this movie is less gritty and certainly doesn't get anywhere near abortion--we had this one on VHS and watched it often. It may be cheesy, it may be "a Walkman for the eyes" but, you know what, sometimes that is exactly what you need from a film. (Plus, it was #8 at the box office for 1983.)

When Tony Manero (John Travolta) eyes the mirror ball at the club where he works as a waiter, I'm sure plenty of people in the audience were very disappointed. They wanted a down-to-earth story like Saturday Night Fever, they wanted the "old neighborhood" and the "Brooklyn eccentricity". The film won razzies and has a 0% on Rotten Tomatoes.

But--and, to be fair, this is going on memory from childhood and could change in this viewing tonight--I still like it.

We get a montage of Tony and Laura (Finola Hughes) wandering around, rather than showing their relationship actually growing... and she's basically gonna be dismissive of him once we see them in bed, so the montage feels out of place, but what's more interesting is it makes me want to watch Two of a Kind, where Travolta plays a more likable asshole than he does here. And, I realized, that movie should really be on this childhood deconstruction list, so I added it. Expect it soon.

And, there was just an amazing moment in this film. Tony is pacing in the lobby of his apartment building, waiting for the pay phone to ring, notification that he got the Satan's Alley dancing gig. He's listening to a tiny radio, the phone rings, he answers, then yells for someone to turn down the radio, beat, and he turns down the volume on the portable in his hand, and goes back to the phone call.

And, this film is dying to be an actual musical. So many of its songs have lyrics that are quite on-the-nose. For example, Tony listening to "Look Out for Number One" or Carl (Frank Stallone) singing "Waking Up" when he's clearly jealous of Jackie (Cynthia Rhodes) talking to Tony.

(Sidenote: why are these Christmas-set movies coming out in the summer? I mean, Christmas is barely relevant to this particular film, but it's interesting that we've got Christmas here and we had Christmas (much more prevalent and thematically relevant) in Trading Places and these movies came out in June and July.)

Seriously, though, I know that Hollywood loves to remake good movies for some reason lately rather than remaking crap and fixing what's wrong. I'm imagining Staying Alive as an actual musical, maybe even a stage musical, and I like the idea of it. Let it be set when it's set, keep the Bee Gees music, Keep the Satan's Alley S&M cheese, but I think by making the story a musical, without any other significant changes, you would actually ground it more in reality. The kind of thing that seems ironic. Raise the fantasy to ground the reality. Universalize it through the emotional expression inherent in song. Putting the songs above the action separates them too much from the characters. This is basically the characters' innermost thoughts and feelings coming out and we get montages. 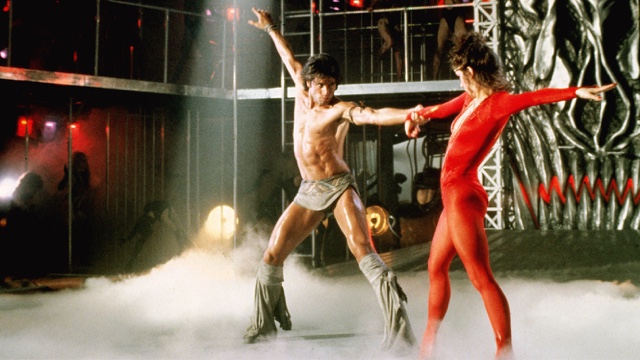 Sure, I wasn't old enough to be disappointed that this came from Saturday Night Fever. But, also, however simplistic the plot here, it works.