I was thinking about westerns today, you know, as one does. And, about war films, and cop films, and all those ex-soldiers killing far too many bad guys in the 80s, and there was a clear trend about (mostly) lone white men fighting all levels of evil, this specifically American (but surely understood in many another culture as well) fantasy about how much one man can do on his own (or with a small band of similar heroes). And, while recently we have drifted back into the same fantasy with the prevalence of superhero films, there is an interesting gap through the 90s--full of aging versions of too many of those 80s heroes and young heroes raging against fascist governments--that makes me want to do a serious study, a la Wright's Six Guns and Society or Nowell's Blood Money, but focused on the thesis that all these various types of action films are variations of one genre, not multiple. That westerns and those grungy cop dramas from the 70s, those big buff soldiers (some damaged inside, some not so much) refighting Vietnam or metaphorically, cinematically staging the end of the Cold War, are all just the one genre. And, superheroes fall right in there.

And, I had notes.

But, I pause, because it has been a very long day.

Woke up before my first alarm (which goes off with a bit of R2-D2 at 6:11), it's 10pm and I had some energetic classes today--give them games to make them talk and they get rowdy--I went to a high school play this evening, and there was the usual filler moments between all that. I started Groundhog Day playing just after I got back from the high school and was briefly at a loss because both my iPad and it's wireless keyboard were still in my bag from work. Because, I was going to work on today's blog entry there, until I remembered that when I hotspot the iPad to my phone I cannot also Bluetooth either one to the keyboard. So, it was watch Groundhog Day on my phone and write on the iPad, which might not have been that bad since, obviously, I am quite familiar with this film, but I just didn't want to. So, I watched some YouTube on the iPad and spent some time on social media and reading comics on my phone as I ate my lunch and waited for my next classes. And, I had these thoughts about action films, and all these fantastic white men with their guns and their superpowers, and I wrote down some notes, and those notes are still in my bag.

So, I get up and grab them, and realize I actually did not write as much as I thought I wrote. Suggestions that, say, Thor (and other solo MCU films) fits Wright's "classic" western plot, and The Avengers fits his "professional" plot. Something like Death Wish or Deadly Pray or Lethal Weapon work as transitional films between the cop action and the ex-soldier action. And, wonderment at the notion that The Matrix might be a transitional film out of the 90s and into... Well, that's the thing, isn't it? Between the teen-centric and deconstructionist action of the 00s, the next step isn't clear... 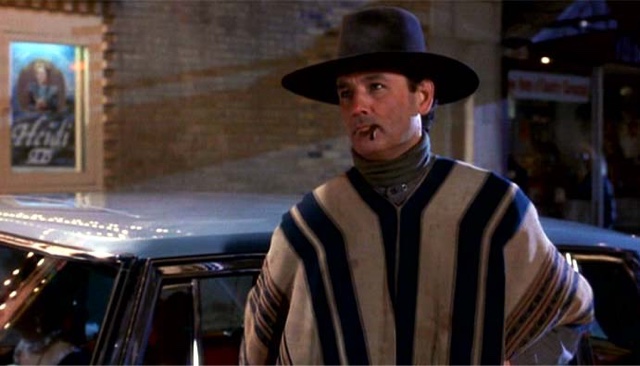 And, yes, I realize that Groundhog Day is none of these. If you're just getting to this blog for the first time and you're wondering why I'm rambling about action movies while I've got Groundhog Day playing, the reason is simple: I have written quite literally hundreds of thousands of words about Groundhog Day and it forms a baseline for everything else at this point. Well, it, and all of the other films I've seen over the past four decades. I mean, I'm writing about High Road to China yesterday and I'm comparing O'Malley to Phil Connors because why the hell not? You know. And, really, a "time loop" movie like this--which O'Malley in his drunken doldrums is in the same boat, metaphorically--is still about the lone white man (usually) and he's just trapped for a little while, because he's got people to save, a world to rule, or whatever.

And, real-world white men complain because Wonder Woman does well at the box office, or Get Out gets nominated for Oscars*.

(* this weekend, by the way, and I may just end up writing a whole lot about the nominees tomorrow or the next day, so I might not get back to the childhood deconstruction until Monday.)

And, I resist getting into a longer political rant. Because, I'm not in the mood for one right now. About how obviously the white male action hero must be a fantasy because so many white men are triggered by teenagers who speak out, or transgender people who want to use the bathroom. And all that.

Instead: Groundhog Day. Because sometimes the white man who's got everything still feels broken inside, and he's an asshole, and he needs some comeuppance, even if the universe has to throw it at him as a temporal madness with no explanation, because that is the explanation. Sometimes, all you have to conquer is one small town, one white woman (or several), and eventually yourself. Because what the white male American protagonist of any film really needs is to become an expert at playing piano and speaking French (though, to be fair, we have no evidence that he became an expert at either of these things), and bowling (deleted scene) and billiards (another deleted scene) and ice sculpting, and seducing Andie MacDowell. Like he doesn't already have the world at his fingertips.

But, Nancy is there, dying for attention. And, Rita is there, also wanting more attention than she is used to getting. (Notably, the first time we see her, she is disappearing on the monitor, which is probably how she feels inside, wanting to do more than just produce.) And, there's Laraine and Mrs. Lancaster, and all those other women Phil beds in his time loop.