who are we and who do we want to be?

Writing for The Atlantic, Christopher Orr sides with the more positive take on Wes Anderson's choice of a Japanese setting and having (mostly) Japanese-speaking humans in his latest film, Isle of Dogs. Yet, in passing mention of the other side, Orr makes an interesting error that both clarifies the positive take and suggests a whole other version of the problem... Let me backtrack. Orr writes (parenthetically):

Unlike the dogs, the Japanese characters--which is to say all of the human beings save one--do not have their words rendered into English, except when explicitly restated by a translator voices by France's McDormand. I leave to individual viewers to decide whether this is a way of center-staging the hounds--my view--or sidelining the Asian protagonists.

First, a small point: Orr's initial phrasing suggests that the dogs are not Japanese, which is either a mislabeling because they are obviously just as much from Japan as the human characters, or it is a cute sort of way of saying that dogs have no national identity because dogs are too pure for that kind of nationalist bullshit. I like that. Or, option three, it was just some lazy phrasing.

The bigger point: I think the language thing is quite obviously a way to center-stage the dogs--

--because Orr's "Asian protagonists" are not protagonists. Atari (Koyu Rankin) is more like the One Ring to the dog's Fellowship... Except that Wes Anderson tends to offer all of his characters a bit of their own agency and the One Ring's motivations are only ever as useful as the more mobile characters can be corrupted. Writing for The Los Angeles Times, Justin Chang asks,

Bluntly put, does this white American filmmaker's highly selective, idiosyncratic rendering of an East Asian society constitute a sincere act of homage, or a clueless failure of sensitivity?

Chang concedes "every one of Anderson's films is an act of imaginative plundering" but the point is made. And, Chang points out one bit that I didn't notice--

Much of the Japanese dialogue, especially Atari's, has been pared down to simple statements that non-speakers can figure out based on context and facial expressions; longer, more complicated exchanges are translated aloud by a hand on-screen English interpreter (Frances McDormand).

Chang argues, "[A]ll these coy linguistic layers amount to their own form of marginalization, effectively reducing the hapless, unsuspecting people of Megasaki to foreigners in their own city." Which echoes Orr's mistake--Megasaki is not the setting of the film, nor are the humans the main characters--but also adds to the growing, other problem.

My take, anyway. And, for the record, because it is perhaps quite necessary in this discussion, I am a white American male.

The problem is not necessarily in sidelining the human Japanese characters, whether in terms of plot or in terms of these linguistic tricks. The problem is in letting these marginalized humans have a recognizable culture or language at all. (Having the heroic student character Tracy (Greta Gerwig) be an American foreign-exchange student creates a whole other level of problematic marginalization.) As Angie Han, writing for Mashable, argues:

The problem is that Isle of Dogs falls into a long history of American Art othering or dehumanizing Asians, borrowing their "exotic" cultures and settings while disregarding the people who created those cultures and live in those settings.

And, she begins her review with the most positive thing about the film, that

Isle of Dogs has something to say about the ugly allure of xenophobia, the sin of standing by while atrocities are committed, and the importance of protecting the most vulnerable members of society.

Karen Han, Daily Beast, says, quite rightly, "There's no discernible reason for Anderson's chosen setting beyond wanting to ape Japanese aesthetics that wouldn't feel like a stretch, or wishful retroactive thinking." I say, quite rightly except there is a very clear reason why Japanese culture works here, and I would like to think that Anderson uses it specifically so that maybe this film's message might reach an audience that needs it, and notably will not find the surface-thin pseudo-fetishization of Japanese culture offensive... But, I don't know if Anderson is that devious. I think he was working with, among others, Kunichi Namura (who also voices Mayor Kobayashi), on putting this story together and embraced the Japanese angle more than the story justified.

The wishful thinking thing, though. The reason that Japan is the culture of choice here, and not, say, Turkish society--the historical "isle of dogs" was Turkish--is because historically, cinematically, East Asian cultures like Japan were the go-to exotic cultures. Like Han's line about borrowing the "exotic" culture and settings, Hollywood has been doing that for a hundred years. And, America doesn't care--as much as it's very vocal, politically correct corners--so much for foreigner's feelings. The Japanese culture in Isle of Dogs might as well have been an alien society. Or a very hard to recognize echo of American culture in a story that invokes other marginalized groups left out of our mainstream. But, by choosing a real-world culture to represent the oppressor here, Anderson has left an opening for the wrong audience, and has diminished and undermined his own message by doing to the people of Megasaki what the people of Megasaki have done to the dogs. Richard Brody, New Yorker, counters:

I was at first surprised that Anderson would cast a white foreigner as the central figure in the political liberation of Megasaki City, but Tracy's presence--virtually inviting the xenophobic wrath of the demagogic ruler--meshes with the parallels that Anderson develops with current American politics...

For Anderson, [this fictional] Japan is a sort of mirror-America, a country that has a prominent, as rich, and as inspiring a cinematic image, due to its movie industry and to the artists whom it sustained; the Japan of "Isle of Dogs" is a movie-made place.

Movie-made place. I love that phrase. But, unfortunately, this movie-made Japan was built from too many movies that grabbed bits and pieces of Japan as (Han's phrasing) "aesthetic flourishes". That Anderson's Japan is built from earlier cinematic Japans doesn't mean that his reductionism and marginalization is okay...

Which is too bad.

Because the story of the dogs at the heart of the film is quite a lovely one.

Better told another way, in another place. 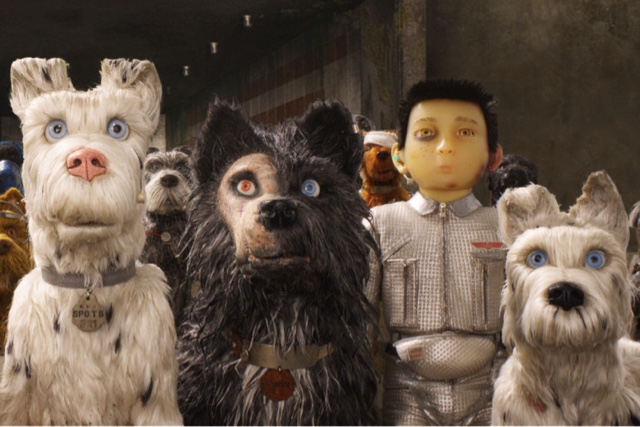