the structure of everything that lives

In the opening scene of Annihilation, which I saw for the second time today, Lomax (Benedict Wong) asks Lena (Natalie Portman) "What do you know?" She has no real answer for him. The film cuts back to him questioning her a few times throughout, and the more she tries to explain things, the less he probably understands. The lack of conclusive answers throughout the film, though, is fundamental to appreciating it. As Elizabeth Bruenig writes in the Washington Post,

the story's central drama concerns the protagonists' efforts to come to terms with something they can't, as mere humans, understand. It certainly leaves a confusing impression: It was only a few days after seeing "Annihilation" that its curious moral logic began to creep, fungus-like, across my conscience. I've begun to think that the particular character of that formless, nameless danger--its eerie, morbid bounty--makes it an excellent villain for our moment.

Additionally, like many a science fiction film uses the alien or monster story to tell something more fundamental about human behavior, Annihilation not only offers the main characters inconclusive answers (though they make some guesses that ring true later, the exact nature of the shimmer is shown (maybe) but never explained) but pits them against one another in actively both seeking answers and avoiding them. Anya (Gina Rodriguez) explicitly ignores video evidence and, even--OH, THERE WILL BE SPOILERS MUCH BIGGER THAN WHAT I HAVE ALREADY OFFERED--when she knows that something is wrong inside her own body, she lashes out at the here remaining companions venturing into the shimmer.

Which gives us one of the best horror scenes in film in a while, with a creepy, half-wounded, faceless bear screaming in the voice of their fallen companion, "Help me!" (An echo, perhaps, of the end of The Blair Witch Project.) This after Anya has tied the remaining three to chairs so not only is there a massive, horrific bear in the room, none of them can move.

But, let us backtrack because those other companions are important. There is Dr. Ventress (Jennifer Jason Leigh), who is in charge and would still be back in her office at a safe distance from the shimmer but she is dying from cancer and wants to go in. There is Anya, who is described as ‘sober’, a recovering addict. There is Josie Radek (Tessa Thompson) who bears scars on her arm from a history of self-harm. There is Cass Sheppard (Tuva Novotny), who lost a child to Leukemia and who, she explains, lost the person she was as a mother as well. And, of course Lena, whose husband disappeared a year ago while on a covert military mission, then abruptly showed up home again, not quite himself. She's been grieving for a year, and now has a mystery to solve as well. The film explicitly suggests through its characters that self destruction is natural for humans (or really all living things). Ventress has been choosing who gets to go into the shimmer and has been choosing people who have no reason to live, because they very well probably won't; Kane (Oscar Isaac), Lena's husband, is the only person to come back, and he came back wrong. Like an echo of Pet Sematary, perhaps, or any morality tale about wishes, or zombies. That which is dead should remain dead. Except that is not what the film is about. There is an inherent melancholy hanging over the entirety of the film because mortality is central to all of it, but what it's about is slightly different. Mortality, our impulses toward and away from death are vital to the plot... At least the second act, anyway.

And, I am finding myself wanting to interrupt to add unrelated details that I want to get to. Impatient with my own writing tonight.

I've talked about self destruction. The film also deals openly in issues of identity, how our actions define us, how names and titles define us. Lena goes into the shimmer without telling three of her companions who she is. Ventress, of course, knows that she is the wife of the one guy who made it out, the same guy that they see cut a man's stomach open on video. Lena hides behind anonymity. And, speaking of anonymity, names matter in this film, just like they did in Ex Machina.

(My entries about that film (617 but especially the series 836 837 838 839 840 841) are some of the best, and densest, stuff I have written for this blog, by the way. And, in case you've seen neither, I'm bringing up Ex Machina because Alex Garland wrote and directed that and Annihilation. Also, watch Ex Machina and watch Annihilation.)

I won't make any claim to being entirely correct about all the references being deliberate here. Also, it should be noted that in VanderMeer's novel, the characters do not have names. The four women (as opposed to the film's five) are a biologist, an anthropologist, a psychologist, and a surveyor. Respectively, those four women in the film would be Lena, the biologist; Josie, the physicist; Ventress, a psychologist, and Cass, a geomorphologist. Anya, a paramedic, is an addition for the film. [Since writing this entry, I have learned that the character names here match characters in J G Ballard’s novel The Crystal World, which involves a mysterious phenomenon crystallizing a forest.] Now, the names:

Ventress, aside from being the name of a Sith from Star Wars canon, is also a town in Louisiana, a town that sits along the "False River", an oxbow lake formed when seasonal flooding of the Mississippi cut off one channel. Everything within the shimmer is not quite what it seems. DNA of different species is being mixed, recombined into new things, the people who venture inside become something other than themselves. And Ventress even appears without her face near the end of the film... But I will come back to that.

Cass Sheppard has the obvious, and quite cinematically common meaningful last name, a homophone for shepherd. And maybe Cass is short for Cassandra, as in Greek myth Cassandra, who could see the future but no one would believe her. Cass suggests, somewhat psychologically correct, that Josie's scars were an attempt to feel alive, not attempts to kill herself. Cass is the first one to die on this latest venture into the shimmer.

Anya Thorensen seems a very specific reference. Olen Thorensen is a science fiction author. In their novel Destiny's Crucible, the protagonist ends up on the planet Anyar. From Thorensen's own website, here is part of the description of that story:

He awakens among strangers speaking an unintelligible language and struggles to accept losing his previous life and finding a place in a society with different customs, needing a way to support himself, and not knowing a single soul.

In Annihilation, the alien organism that creates/is the shimmer seems to be singular, alone, changing the life around it... Well, maybe to understand. Maybe to conquer. Maybe just to feel like it isn't alone anymore. Anya is the first one in the film to openly recognize that her body is changing and she acts immediately to get answers, even though she does not really want them.

Josie Radek. Josie, Hebrew meaning, "God will add." Radek, possibly a reference to Karl Radek, Marxist, and a Communist leader after the Russian Revolution (before Stalin took over). Josie specifically says to Lena at one point, "Ventress wants to face it, you want to fight it, I don't think I want to do either of those things." And, SPOILERS, she gives into the changes within the shimmer willingly.

Lena, our central protagonist. In Persian, the name means light, sunlight, or pretty girl. Or it could be a variant of Helena, which comes, perhaps, from the Greek for torch or from Selene for the moon. Still, light. The shimmer refracts light, refracts radio signals, and refracts DNA. Lena refuses to refract, sort of. But, she reaches the lighthouse, where we saw a meteorite strike at the start of the film. In the lighthouse, she sees Kane set off a phosphorus grenade, which is very bright, and sets one off herself. She is also surrounded in a halo of light when she crawls down the hole where the meteorite ended its trip three years before. As the only one of the women who cares if she gets back out of the shimmer--

(Sort of; the additional character for the film, Anya, actively seeks to leave, but ultimately sets up her own destruction by incapacitating her companions just in time for the bear to come.)

--she is the metaphorical light among the party. 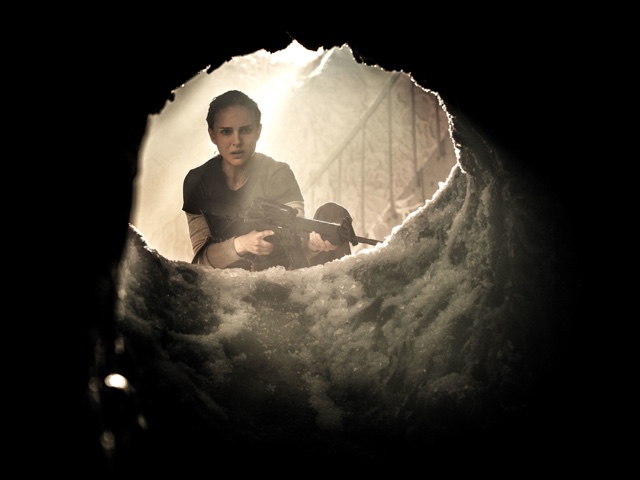 Kane and Lomax are the only other characters who have significant roles, and their names matter as well. Kane feels like an obvious reference to Cain from the Bible. Kane causes the death of at least one of his party, and ultimately--HUGE SPOILERS FOLLOW--he sacrifices himself while his duplicate looks on. In terms of the biblical reference, the Kane that has made it out of the shimmer is Cain, and Lena's husband who went into the shimmer is Abel. But, in terms of the film's themes of self and identity, it's debatable if either one of the two is Kane, or if either one is not Kane. It all depends on how you look at it. [Also, Kane is John Hurt’s name in Alien, and he is the one infected by the alien, the one who brings the alien onto the ship.]

And, Lomax is the name of a ghost town in Nebraska. (Also, the abandoned military outpost is called Fort Amaya. Though a Spanish name, Amaya is written in Japanese with the letters for "heavenly valley".)

And, I didn't even get to the echo of Doctor Who "Midnight" or the dueling sounds tracks, or the Crosby Stills & Nash lyrics (which will bring us back to Ventress without a face).

I may have to see Annihilation again tomorrow.