the first thing about human nature

Something I didn't know the first time I saw Trading Places: it was supposed to be a Richard Pyror and Gene Wilder vehicle. Pryor dropped out. Eddie Murphy came in, got Wilder out (according to random trivia bit on IMDb) so he wouldn't look like he was "just trying to be another Pryor.

Something I did know: Yoda, Marcus Brody, and Laurie Strode are in this.

It's Christmas season. Louis Winthorpe III (Dan Aykroyd) is a commodities trader, rich, snooty, with a classy fiancé to match. Billy Ray Valentine (Murphy) is poor, he pretends to be a bling, legless Vietnam vet to beg for money. Their lives are about to get switched, because high concept comedy is a good start. Real classist deconstruction is where you go from there. Or where this movie goes from there.

Billy Ray--who's black, in case you don't know who Eddie Murphy is, you cinematically uneducated miscreant--accidentally bumps into Louis--who's white, you filmically inexperienced buffoon--and picks up his brief case to give back. Louis immediately accuses him of being a thief, cops give chase, they catch him and Randolph (Ralph Bellamy) notably asks Billy Ray, "You're from a broken home, of course?"

"You have a history of juvenile arrests, I presume," Randolph says. "Drug abuse, reform schools, state prisons and all?"

After the cops take Valentine away, Randolph proclaims, "That man is a product of a poor environment. There's absolutely nothing wrong with him. I can prove it."

His brother Mortimer (Don Ameche) replies, "Of course there's something wrong with him; he's a negro! Probably been stealing since he could crawl." And the contest that sets our plot in motion is born.

Later, Randolph tells Mortimer, "Given the right surroundings and encouragement, I'll bet that man could run our company as well as your young Winthorpe." Details to come in a later scene. Randolph and his Mortimer scheme to take everything Louis has and give it to Billy Ray...

Well Randolph schemes to do that. Mortimer doesn't think it will work. They heap misfortune upon Louis to turn him into a criminal. "We've done it before," Randolph proclaims, and this is the 1% dictating the world below. And, I'm just seven years old when I see this movie. 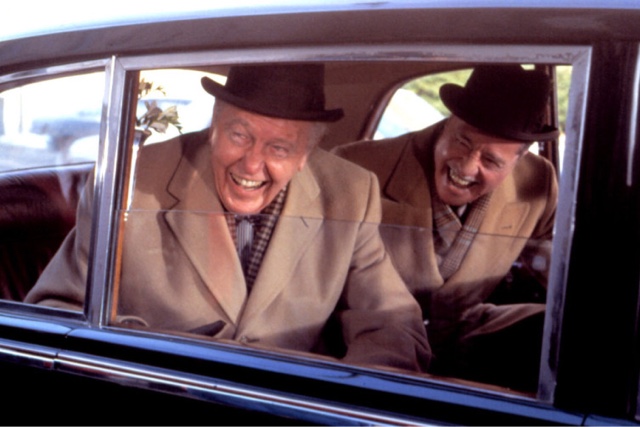 The occasional offensive-but-not-in-mainstream-1983 jokes, of course. (And, some blackface in act three, which I'm pretty sure was already offensive.) But, the film is actually quite progressive for the time. Hell, the plot is a little progressive even now, but that is really just a measure of how little progress we've made in three and a half decades, between white people and black people, between rich people and poor people.

Plus, there's this bit as Billy Ray is figuring out just what The Duke brothers are offering him and he breaks a vase accidentally. Randolph tells him that it wasn't cheap, "I think we paid $35,000 for it. But, I seem to remember we estimated its value at $50,00 for the insurance company." And, he turns to his brother and laughs. "You see, Mortimer, William has already made us a profit of $15,000." Mortimer laughs, too.

It's interesting that Louis' downfall begins with him being framed for stealing just $150.

And, there are great lines for seven-year-old me like "Strip you little shit, before I tear you a new asshole." Also, later, "I'll rip out your eyes and piss on your brain." I am learning some wonderful phrases here.

Also, I'm learning about the quart of blood technique and other useful things. Seeing myself some topless women--and this is one of the first movies we've got on VHS that includes nude scenes, and I won't bother admitting watching any of those scenes more than the rest of the movie when no one else was home when I was a few years older. No point in that.

I'm definitely getting a good idea of what a prostitute is, and all the bigger stuff about rich men manipulating everyone beneath them--that's just settling into the back of my mind for use years later when I drift farther and farther away from appreciating capitalism.

And, it's great that Coleman (Denholm Elliott, aka Marcus Brody, as Louis' butler) likes Billy Ray because, unlike Louis, Billy Ray is nice to him.

And, in terms of cinema, I'm learning that a plot can be complex, barely explain some of its details, and still be done really well. There's also some nice schadenfreude going on here.

I find myself looking up the giant clothespin sculpture when Louis gets thrown out of his bank, and taken in by Ophelia (Jamie Lee Curtis) in front of it. A piece by Claes Oldenburg. The Association for Public Art says Oldenburg "has been noted for his attempts to democratize art" and describes the clothespin as "not, in fact, a reproduction of an ordinary clothespin, but a sweeping, stylized version". And, it was commissioned to be placed outside the the City Hall subway station so that everyone could see it. The shape of the spring suggests both a 7 and a 6, tying "Philadelphia's colonial heritage to its difficult present, Clothespin addresses the city's civic issues and attempts to close the gap between income levels within the city though its universally recognized form" according to Hunter, 2013 (an ordinal source I cannot find, but I like the idea...). And, I figure the placement in the film is deliberate. The moment where Louis becomes the charge of Ophelia, sort of, happens in front of this democratizing sculpture, this art that serves to blur the lines between classes.

Louis had caught onto Randoph and Mortimer's secret operative, Clarence Beeks (Paul Gleason) just before they ruined his life. Billy Ray catches onto Beeks existence just in time for Louis to pull a gun and prove Randolph the winner of their bet. Also, Billy Ray says Louis belongs behind bars and Mortimer defense him; "He's unemployed, Valentine," he says.

Louis had been planting drugs in Billy Ray's desk, Billy Ray rise up a bag of pills. "Oh, but he has money to buy drugs, right. Listen, you can't be soft on people like that. Take it from me. I know, Randolph." The classist tables have turned.

Throwing most of the planted drugs into the trash, Billy Ray pockets a joint. Smoking it in the restroom, he overhears Randolph and Mortimer settling their bet. $1. That's all. They ruined one man's life and lifted up another, for just $1. Also, Randolph intends to reverse the situation but Mortimer wants neither Louis, for what he's done, or Billy Ray, because, well, he's a word I'm not going to include here.

The drive into the third act has begun. Billy Ray chases after the drunken, Santa-suited Louis. Some revenge is in order.

And, I did not remember Louis pointing the gun at his head and pulling the trigger. Wow. That's dark. The gun misfires. He goes back to Ophelia's and takes some pills. But, Billy Ray is there by then and Louis is saved.

Along with the Clothespin thing, another deliberate detail that I never would have noticed as a kid: the smuggling of the crop report to the Dukes ahead of the public is termed Operation Strange Fruit. The song "Strange Fruit" by Billie Holiday, with lyrics based on a poem by Abel Meeropol, is, of course, about the lynching of African Americans.