because getting there is half the fun

I don't know if, as a kid, I realized that Ed (Eugene Levy) was deliberately fucking with Clark (Chevy Chase) in the opening of Vacation--forcing the sale on the Wagon Queen Family Truckster. Eventually, I got it, but the first time, in the theater, I think I just thought it was an honest mistake.

And, I laughed at a line I don't think I ever found funny before. Clark tells the kids about the St. Louis Arch, "the Gateway to the West. It's over 600 feet tall and there's an elevator all the way to the top." Rusty asks, "Dad, can we go up in it?" Clark replies simply, "No." Like so many vacation details, road trips past all the interesting places because you don't have the time to stop everywhere. For example, they show the sign for Gatorworld on a postcard during the opening credits. When our speech team was in Florida my last year as coach, we drove past Gatorworld, but we weren't even there for a vacation; we were there for a tournament. We didn't have time for fun things like Gatorworld. But, Chase's delivery, so dry, on the "no" makes it even better.

(Nitpick: The first night, Ellen (Beverly D'Angelo) suggests they call ahead that they will be late to Eddie (Randy Quaid) and Catherine's (Miriam Flynn) place, Clark says they need to be there by 10am or the schedule will be off. But, the next morning, they stop in Dodge City and Clark suggests they stop at a House of Mud. How would they possibly make it by 10am? Or was the sex so good the night before that Clark relaxed the schedule not just a little but a lot?)

Of course, this film is Harold Ramis and John Hughes teamed up, so it will have some great lines, and great delivery. Great moments like Eddie offering Clark a beer than handing him his beer, from which he already took a drink, and opening a new one for himself. Or Vicki's proclamation about her dad saying she's the best at French kissing--except that one is obvious. More subtle--and slightly offensive I suppose--is the fact that Daisy-Mabel was born without a tongue.

Also, I only just learned that Ramis and Chase did uncredited rewrites to focus the film more on the adults instead of the teens. And, apparently Ferrari Girl (Christie Brinkley) was supposed to be a younger love interest for Rusty, not for Clark. Despite how despicable Clark is in the resulting subplot, I think it's better as it is. Not because the other version couldn't have worked, but the way the film begins--notably Clark's whole speech to Ellen about wanting a roadtrip instead of flying because he doesn't get to see the kids enough--it has to be focused on Clark. And, it has to have the danger and the fantasy of Ferrari Girl because that is the vacation he needs. Ellen gets shortshrift, though. But, as much as D'Angelo can hold her own opposite Chase, this is his story.

Not that we need the film to be about the white cisgender male and his mid-life crisis. But, the film doesn't make much effort to be anything else, and I wonder if it would have worked being something else. Ramis and Hughes are good, Hughes even writes pretty good films about teenagers. Teenagers are supposed to have issues being themselves, have issues making the right decisions. That the adult male who should know better has such problems is inherently more comedic. 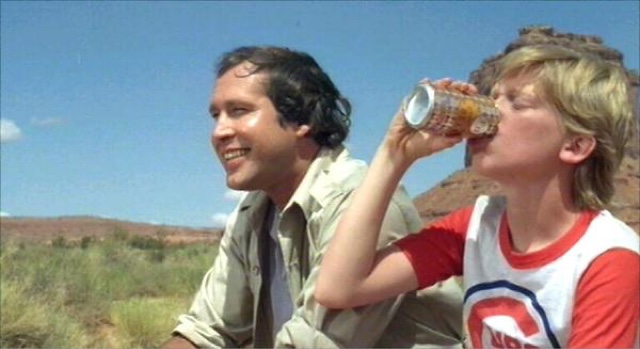 I'd forgotten that they actually say what Clark does for a living; he makes food additives. Basically, he works to preserves food longer, or make food taste better. Which fits into the whole imaginary vacation thing that Clark has in his head. He wants something better than reality. He tells Rusty (Anthony Michael Hall), "When I was a boy, just about every summer we'd take a vacation. In 18 years, we never had fun. Now I have my own family. And, we're on our own vacation. You know what?" "What, Dad?" "We're going to have fun." I wrote about Clark's nostalgia for something that exists only in his imagination before, regarding Christmas Vacation.

I also proclaimed--tying directly into what I'm doing in this blog lately:

It's strange actually--between Harold Ramis and his improv background and John Hughes' tendency toward setpiece comedy bits, the first [Vacation] movie should not work as well as it does. For me. But, it's a classic from my childhood, a piece of my psyche's experience with comedy films from then until today.

My family took vacations almost every fall, plus extra ones from time to time. There were a lot of us, so they tended to be roadtrips. Including two multiple-day drives to Missouri. And, just a few years ago, for this very blog, I took two of my kids on a road trip around the southwest and ended up killing my car. So much of vacations is either boring stints in the car, or the plane, or half-imagined versions of the stops we made that are far more interesting than the events really were.