I made the mistake--and, in this case, it was a mistake [it made hating this thing even easier]--of reading Roger Ebert's review of The Natural before I pressed play on the film tonight. I remember this film as a weird sort of film noir that somehow involves a baseball player. And, it opens now with Robert Redford (who we will find out later is playing a character called Roy Hobbs) waiting for and then getting on a train, not useful dialogue, not characterization effort, just Redford. CUT TO: flashback montage, Roy as a boy learns to play baseball while his father says some lines that someone thought were philosophical when they wrote them...

A storm. Montage of sports pennants in the flash of the lightning. Then the tree out back gets struck, Roy carves a bat out of its trunk and I get something Roger says.

As for the baseball, the movie isn't even subtle. When a team is losing, it makes Little League errors. When it's winning, the hits are so accurate they even smash the bad guy's windows. There's not a second of real baseball strategy in the whole film. the message is: Baseball is purely and simply a matter of divine intervention. At about the 130-minute mark, I got the idea that God's only begotten son was playing right field for the New York team.

Which Roger fails to connect to Roy's injury... Not that I'm going to play with any Cinematic Christ Figuring but a wound in the side is great stigmata.

Roy Hobbs is, I've read, based on Ty Cobb. [The 1952 novel was apparently based on an actual shooting incident and comeback involving Philadelphia Phillie Eddie Waitkus. Or Chicago Cub Billie Jurges.] We have barely met Roy; we know his father raised him on baseball, we know God Himself gave him the material for a bat, and we know he left a girl behind (and they had sex), but now we meet new characters on another train, including the Whammer (Joe Don Baker) who is basically a skin on Babe Ruth. I only really know that Robert Duvall's character (also on this train) is an evil sports writer [actually, he's a cartoonist] because Roger mentions him in the review. This film does not want us to know much about these characters as actual people. Any personality is coming from the actors--maybe the director, but definitely not the script.

At a carnival, there's a bet. Roy is going to try to strike out the Whammer in a field nearby. And, I realize that this film actually needs to be about real, historical baseball players and not these stand-ins, because what it's doing is like baseball myth, except there's no story passed down to become this story. Barry Levinson's direction feels like he's going for mythic, though. And, in that sense, the film is... I want to say it's working, but it's still just so overdramatic and broad that I can't be bothered to be nice.

I'm drawn back to Roger.

He begins his review with this lament:

Why didn't they make a baseball picture?

And Harriet has a line that is... Too much. Roy has no idea who Homer is when she mentions him. "Homer lived ages ago and wrote about heroes and gods," she explains. "And he would've written about baseball had he seen you out there today."

And she just disappeared in a flicker of the train's lights and I couldn't help but ask out loud, "What the hell is going on in this movie?" Not that it's confusing. It's just so full of itself. Full of the notion that baseball is the American pasttime--which, I guess it is--but... Here's the thing; I've written in this blog before about how Westerns are basically American mythology, but for the most part the key there is that the individual films are not trying to be mythic. They all invoke similar tropes and visuals, and grab the same audience, the same American cultural personality, and become mythic. The Natural is making an effort to be mythic but it hasn't earned it. Twenty minutes in, Roy is shot by Harriet because she doesn't want him to be the best... I guess. CUT TO: 16 years later, Roy is only just making it onto a real team, and we've seen nothing of the intervening years, nothing of his actual skill beyond those few pitches we saw against the Whammer. And, Wilford Brimley shows up as Pop Fisher, the team manager, and he's got more personality than anyone on the screen so far. 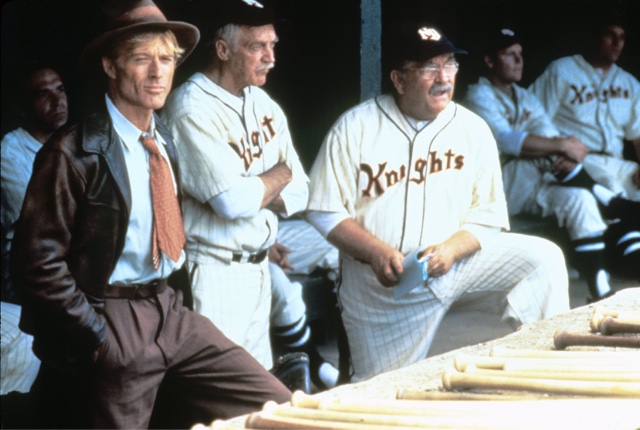 Jump ahead and we've got an awful montage with old-timely music and Roy isn't even allowed to play because Pop doesn't like being handed a middle-age rookie. And, I'm distracted looking at character names on IMDb--Memo Paris, Harriet Bird, The Judge, Red Blow, Sam Simpson, Bump Bailey.. It's like some crappy comic book threw up on the script.

But, let's get back to Roger's opening lines:

Why did "The Natural" have to be turned into idolatry on behalf of Robert Redford? Why did a perfectly good story, filled with interesting people, have to be made into one man's ascension to the godlike, especially when no effort is made to give that ascension meaning? And we're the most important people in the god-man's life kept mostly offscreen so they wouldn't upstage him?

And Roy knocks the cover off the ball--right after Pop told him to do just that--as lightning strikes, rain starts pouring and it's some bullshit miracle, and I'm done for today.