the best time i ever had

Joan Wilder's life isn't normally like her books. Great romance. Adventure. Life and death. Revenge. She lives alone with her cat (named Romeo), drinks alcohol from the little bottles you might have gotten on a plane back in '84. Romancing the Stone begins as she finishes writing her latest romance novel. And the premise of the film, in case you're some unfortunate millennial who has never heard of it, is simple--Joan's brother in law is murdered in Colombia, but not before getting a treasure map in the mail for Joan (Kathleen Turner). Then Elaine (Mary Ellen Trainor), Joan's sister is abducted and Joan heads for Colombia, hooks up with Jack Colton (Michael Douglas), who coincidentally resembles the shadowy Jesse from her novels--think cowboy with a modern twist.

The film is basically Joan's fantasy coming true. And, for the audience, it's a nice adventure fantasy as well. And, I only just learned that this was screenwriter Diane Thomas' only finished, produced script. Spielberg would hire her to write the second Indiana Jones film, but she died in 1985, killed when her drunk boyfriend crashed the Porsche that Michael Douglas gave her as a gift. She wrote the script while working as a waitress, and pitched it to Douglas when he came in as a customer one day.

The cat was purportedly added by Treva Silverman, and Joan simply lived alone in Thomas' script. The cat was supposed to make her more "likable".

I still remember that Saturday Night Live's News a week after this movie came out (Romancing the Stone was released March 30, Michael Douglas hosted Saturday Night Live April 7) kept cutting to the mudslide scene instead of the right clips for various stories. I don't remember what stories, just that they kept cutting to that scene. I tried to find the clip just now, I found the News clip from the week after, and I found Douglas' monologue, which also included that clip, but not the News clip I remember. But, the point is, that's how it works often with specific movies from so long ago; they end up linked to other things in my head. Romancing the Stone will always be linked to Saturday Night Live for me. 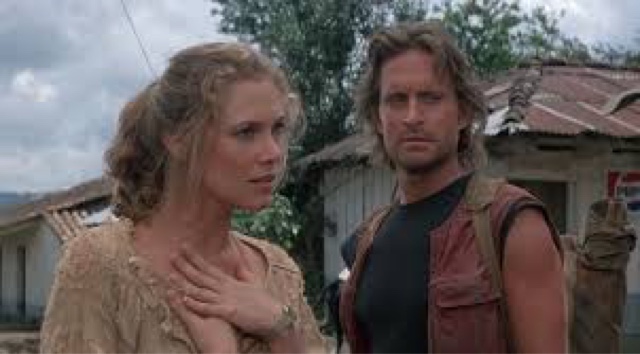 Jump forward a little, when I was young, I did not know just what it meant that Jack set a fire in that plane full of marijuana, and was burning bricks of the stuff.

And Juan (Alfonso Arau) is a drug dealer, hence the nice house in the "pigsty" of a town. And Lupe's Escape, which he has used "many times in the past."

While some movies from when I was young feel quite dated, there isn't much here that feels that way. And, it's still fun. And, the romance works, maybe because it is nested inside the fantastic adventure. But, I'll get into that tomorrow.