a trend in musicals

In 1950, 3.8 million households in America had TVs, roughly 9% of homes. By 1952 that number was up to 15.3 million, roughly 34% of households. Fully one third of homes had a television, so film had clear competition. This is just one context in which Singin' in the Rain was released.

Like in the film, musicals had emerged almost as soon as talkies had. Feuer (1995) explains: "during the talkie boom that followed [The Jazz Singer] (1929-1930), a large percentage of the early musicals took for their subjects the world of entertainment: Broadway, vaudeville, the Ziegfield Follies, burlesque, night clubs, the circus, Tin Pan Alley, and, to a lesser extent, mass entertainment media in the form of radio or Hollywood itself" (p. 441). This is another context in which Singin' in the Rain--or better yet, The Dancing Cavalier--was released. Musicals tended to look at the world of entertainment. Feuer continues: "By the late forties and into the early fifties, a series of musicals produced by the Freed unit at MGM used the backstage format to present sustained reflections upon, and affirmations of, the musical genre itself" (p. 442). This includes Singin' in the Rain. That "Broadway Melody" bit I don't particularly care for actually fits the previous context quite readily, and positions Singin' in the Rain even more so as a sort of deconstruction of the Hollywood musical. Or, as Feuer puts it, it "demystif[ies] the production of entertainment. But, the film remythicizes at another level that which [it] set[s] out to expose" (p. 443). That is, the film deconstructs the production--the final shot even suggests that the film we are watching is the next, quite successful product to include Don Lockwood and Kathy Seldon--while also promoting the process of production. Cohan (2000) writes of the film's "revisionist incorporation of Kelly's star image figure[ing] into its mythification of Hollywood" (p. 71). What we see of The Royal Rascal, by the way, incorporates footage from the Kelly-starring The Three Musketeers "as an inexpensive way to include film supposedly starring Don Lockwood" (ibid). The thing is--and remember, I've already written about how Singin' in the Rain's songs are mostly preexisting songs already utilized in other musicals--this inclusion of footage from another Gene Kelly film works on a metatextual level to allude to more of Hollywood. Singin' in the Rain is not a singular product, localized to itself; it both incorporates and comments on existing Hollywood product in order to deconstruct, and then remythicize, Hollywood.

What is interesting about the deconstruction of the Hollywood musical is that a good musical hides the effort it takes to make it. Singin' in the Rain revolves around some of the difficulty in making a film musical while, at the same time, hiding the effort it took to be made. Musical numbers are not (for the most part) separated from the action but instead arise quite smoothly out of it. Feuer suggests that these "[m]ultiple levels of performance and consequent multiple levels of audience combine to create a myth about musical entertainment permeating ordinary life" (p. 443). Not to necessarily suggest that Don's life is ordinary, or that Cosmo's is... though, perhaps, Kathy's is, relatively. But, Kathy is as at home expressing herself in song and dance as Don and Cosmo are (and as Lina is not). There is a certain suspension of disbelief that goes with watching any musical--it is perfectly normal for people to break into song. In a self-reflexive musical, though, it is, depending on the scene, something perfectly natural for a character to sing and/or dance, or in another scene, to have a choreographed number or an arranged singing performance. "Beautiful Girl" serves as an example of the former, while "Would You?" serves as an example of the latter. But, in either case, we see no preparation, no sessions with the choreographer. The "Moses Supposes" scene (on my TV right now) may come closest to giving us a display of preparation. But, what begins as a vocal lesson quite rapidly turns into a "spontaneous" song and dance number. Feuer calls this an "illusion of spontaneity." "The musical," Feuer writes, "technically the most complex type of film produced in Hollywood, paradoxically has always been the genre that attempts to give the greatest illusion of spontaneity and effortlessness" (p. 447). Cohan points out how the titular number

relies on numerous artists who remai[n] invisible as laborors [sic]: craftspeople and technicians, such as the musical arranger, cameraman, soundman, set designer, costumer, not to mention the anonymous crew who lit the set, installed rain pipes throughout the street, and even dug ditches, the holes in the ground for puddles that had to match Kelly's steps exactly. (pp. 71-72)

Yet, that sequence showcases Gene Kelly and only Gene Kelly.

A few scenes begin within the realm of Feuer's illusion of spontaneity but quickly move outside it to be directed toward the audience. "Make 'Em Laugh," for example, begins with Cosmo singing to Don, and Don remains in the shot for a while, but then Cosmo's performance moves on and his song and his dance are directed toward us. Similarly, "Moses Supposes" begins with Don and Cosmo essentially singing to the vocal coach, a little mockingly, but then their attention changes and in the end, they even bury the vocal coach in various items from around the room, removing him from the scene almost completely. 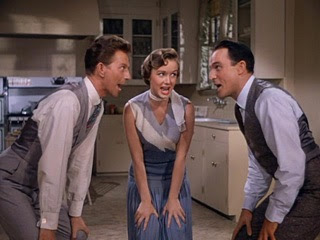 "Good Morning" begins with Kathy and Cosmo and Don singing to each other, like an extension of their conversation. But, then the three of them are singing and dancing for us. Ultimately, each of these sequences has to end with the audience in mind, because this is a musical film with an intended audience. But, these sequences also start--as if it is perfectly natural--right out of legitimate onscreen actions. Musical performance becomes as natural as any dialogue or action, and what should make the musical be entirely unrealistic creates only a hyperreality rather than an unreality.