oh, that color is bad for anita

Rubin and Melnick (2007) argue: "West Side Story turned to Puerto Ricans as the newest 'problem' group that needed to be incorporated into a national narrative of reconciliation" (p. 100). Romeo and Juliet, the blueprint for West Side Story, deals in a generational conflict between families, not a matter of race. West Side Story makes color a vital difference between one side and another.

That opening 4 minute color-shifting aerial drawing of New York City is not just a simple poster-style visual but a vital transition of stage to screen. I don't know how colorful the stage version was, but this film version is all about color, and not just of skin. The gangs have their colors--Sharks a lot of purples and reds, and a bit of green, the Jets some muted yellows and blues and browns. There are a few exceptions (one Jet that wears a red shirt, for example). But, color separates not just people but locations. For example, "Jet Song" is starting right now, and they're in an alley that deadends at a fence. On the other side of that fence: a red building. Red, a Shark color.)

Rubin and Melnick simplify things... or rather, they argue that West Side Story simplified things--things, being "all the complexities of foreign affairs, rapidly globalizing business practices, and immigration policy"--into "a simple story of a young love between a Puerto Rican woman, Maria (played in the film by Natalie Wood, not a Puerto Rican), and an 'American' boy, Tony" (p. 100). Sandoval-Sanchez (1999) actually argues that West Side Story has perpetuated our view of the West Side "as a site of urban, ethnic, and racial tensions" (p. 64).

The dance, the walls are red, the floor is brown, and a the couple Jets that wear purple wear it more noticeably here. And, with the Jets' girls, there is added orange. But, the Sharks--they are all in purple or red, except for Maria, and she's got that red belt to mark her white dress, which would otherwise paint her as an innocent, virginal, as a part of the Sharks even as the white marks her as something entirely outside of both groups.

Invented by... or perpetuated by--I shouldn't put words in Sandoval-Sanchez's mouth--West Side Story offers up a world with almost no adults, and only two racial groups. On the one hand, we could take the suggestion that only the youth of America can finally get us past our petty racial/ethnic/cultural squabbles. On the other hand, maybe those squabbles are only solvable--if you can even take the end of this film as anything particularly conclusive for the conflict in question--if there are just two groups involved, which is entirely unrealistic. Rubin and Melnick argue that West Side Story "avoid[s] the complicated geographic dynamics that brought Puerto Rican migrants into close contact with African Americans in upper Manhattan and the complicated racial dynamics that forced many Americans to come to grips with the 'in-between' status of Puerto Ricans" (p. 100). An important sidenote... or a question to think about, at least. Does the end of this story suggest that peace is possible? Does it suggest that the Sharks and the Jets won't just keep fighting over territory tomorrow and tomorrow and tomorrow? Sure, their leaders are gone, but it it was Riff and Bernardo who were trying to boil everything down to a single battle, to get things over with. It is not entirely implausible that the fighting could get worse as those with seemingly cooler heads have been killed.

Tony sings "Maria" and the movie removes him from the dance to a purple-hued neighborhood. He's in Shark territory. And, there's Maria's door, multicolored glass. Coupled with her white dress, she has been effectively removed from the colored conflict. And, that building has a purple interior which transitions to green as Bernardo and Anita go upstairs.

Sandoval-Sanchez describes a "Manhattan... divided territorially, economically, racially, and ethnically. Each socioeconomic and ethnoracial group inhabits a space concretely demarcated, and even neighborhood border crossings are avoided" (p. 64). Noting that the Jets are "children" Sandoval-Sanchez says, "Their actions and values embody the ideological apparatus of the Anglo-American national subjectivity--that is, the ideological program and ways of doing of the 'all-American boy'" (ibid). Above, I suggested that there are few adults in the film because the youth of America might be the only ones who could fix anything. But, the more cynical, and unfortunately, more accurate reasoning is that we see only youths because the conflict is generational, passed down from parents to children, parents to children. It's not something that goes away in a night or two; it isn't put behind us with a handful of deaths. Look at any inner city to this day--minorities still in conflict with one another because what else can they do?

(I'd be curious to see a production of West Side Story that cast the Jets as, say, African American. There would be an entirely different dynamic at play, especially when the white Office Krupke and Detective Schrank show up. Hell, "Gee, Officer Krupke!" would play in a whole new light.)

Doc's drug store is devoid of color but for a pinball machine, and Doc himself wears plain clothes. This is neutral territory, even if Tony works there and his name is written on the wall. Jets is also written on the that same wall. Notably, after the war council is over, Tony removes his yellow coat and is dressed as plainly as Doc. He carried the coat, sure, but he does not wear it, as he crosses the same spotlit area of the playground where he will later lie dead.

After the San Felipe Segundo hurricane devastated Puerto Rico in 1928--nearly 25 thousand homes destroyed, nearly 200 thousand damaged, over 500 thousand people left homeless, not to mention the damage to agriculture there by heavy rain... which combined with United States imperialist-driven corporate takeover of said agriculture (and the Puerto Rican economy) since 1898--Puerto Rican migration to the mainland increased. Operation Bootstrap in 1947 increased that migration even more. In 1930, New York has less than 50 thousand Puerto Ricans. By 1950, that number was around 250 thousand. By 1956, it was well over 500 thousand. West Side Story was produced for the stage in 1957. Puerto Rican influx into Anglo territory in New York was a subject ripe for this story.

In the "wedding" scene, Mari wears yellow, a Jet color. Tony's beige jacket has purple lining. The color lines are being blurred, blended.

During "Tonight" Maria is bathed in red and then purple. Tony goes without either gang's colors.

This story, by the way, was going to be East Side Story, and be about a Jewish girl and an Italian Catholic boy. The real-life influx of Puerto Ricans into New York, plus news stories about juvenile delinquents and gangs eventually turned the story into what it is. Sandoval-Sanchez explains: "The writers moved comfortably from Jews and Italians, to Chicanos, to blacks, and finally to Puerto Ricans" (p. 66). They wanted it to be whites versus some people of color or another. "The assumptions of such a script," Sandoval-Sanchez" argues, reveal a priori the attitudes and prejudices against racial minorities in the U.S...." (pp. 66-67). Nothing new, and nothing we have left behind. Still, it's presented as a heightened form of reality, a musical.

Missing are some salient details. Like Operation Bootstrap "represent[ing] a major economic and cultural assault on Puerto Rico... focused on the recruitment of Puerto Ricans as laborers [which] did nothing, of course, to help make sure that Puerto Ricans would be welcomed as 'community members as well'" (Rubin & Melnick, p. 105, citing Whalen, 2001, p. 3). The Imperial, colonial period was supposed to be over, but we were recruiting these people as cheap labor, taking advantage of them. And, then they were stuck in poorer neighborhoods, isolated and separated from whites. While Rubin and Melnick may argue that West Side Story was "part of a larger liberal attempt to build support for the idea that Puerto Ricans were assimilable" (p. 106), that doesn't mean the attempt was successful. Rubin and Melnick cite Briggs (2002) regarding "McCarthyite repression of the Puerto Rican left" for example (p. 106).

The end of "Somewhere": Tony and Maria silhouetted in front of the light from her multicolored door, squares of red and purple. He has separated from the Jet colors entirely. And, while there are yellow squares in that door, none of them lights this shot. 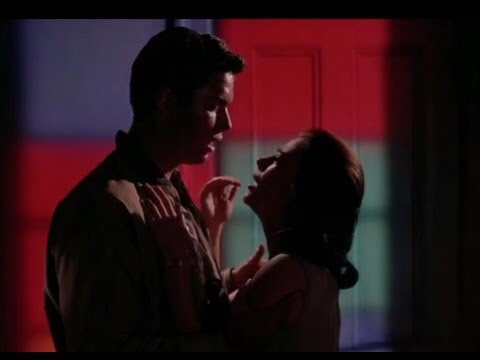 Missing is a song like "Jet Song" or even "Gee, Officer Krupke!" for the Sharks. They get no explanation for their violence, no description of their organization. They remain the Other. Of course, the most... disturbing, perhaps, the least balletic violence in the film, comes from the Jets, arguably the home team in this conflict, when they attack Anita at Doc's.

Maria is dressed in red now, for the final scene, angry enough to join the fight. "Now I have hate," she proclaims. But, she cannot fire the gun. Together, Sharks and Jets carry off Tony's body and a Jet puts that black scarf on Maria's head. The location is no longer colored, no longer marked. The movie wants to tell us that the conflict is over.

The movie, I would say, is simplifying things a bit much. But, that doesn't mean the point does not stand.

Sandoval-Sanchez, A. (1999). Jose, Can You See? Latinos On and Off Broadway. Madison, WI: University of Wisconsin Press.