it's right outside the door

A couple questions linger as I complete my week with West Side Story.

The first: why did Saul Bass give us such a static opening image?

Sure it changes color, but as far as movement goes, it's got nothing on Anatomy of a Murder, The Man with the Golden Gun, Psycho, Spartacus, Vertigo, North by Northwest... and more. Bass usually goes for something more... interesting.

I read that he was also responsible for the aerial shots that take us from that overview of Manhattan into the smaller zones, until we get to the West Side and the playground and the Jets. But, that slow movement doesn't make up for the static image of Manhattan.

His end credits are nice, putting the credits onto walls and signs. Between that and the aerial shots, he certainly evokes a specific time and place. But, I can't help but feel a little disappointed that the initial shot is so static but for the color.

The second: Why are there rows of doors around the neighborhood? 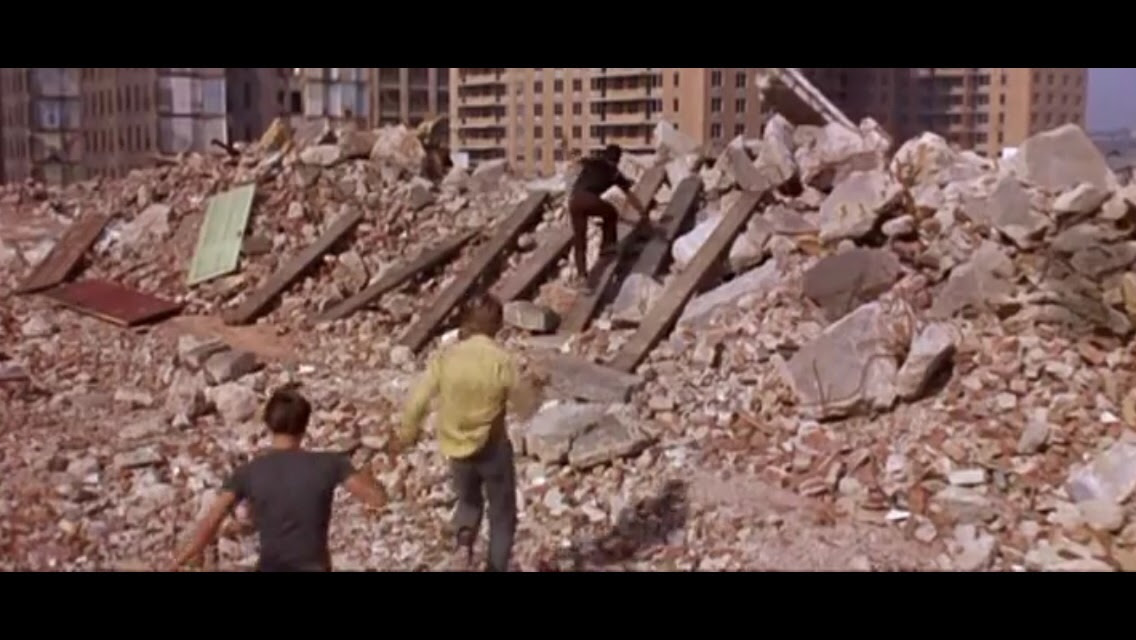 Here, strewn in a junkpile, or what might be the wreckage of a demolished building, except those doors are completely intact. 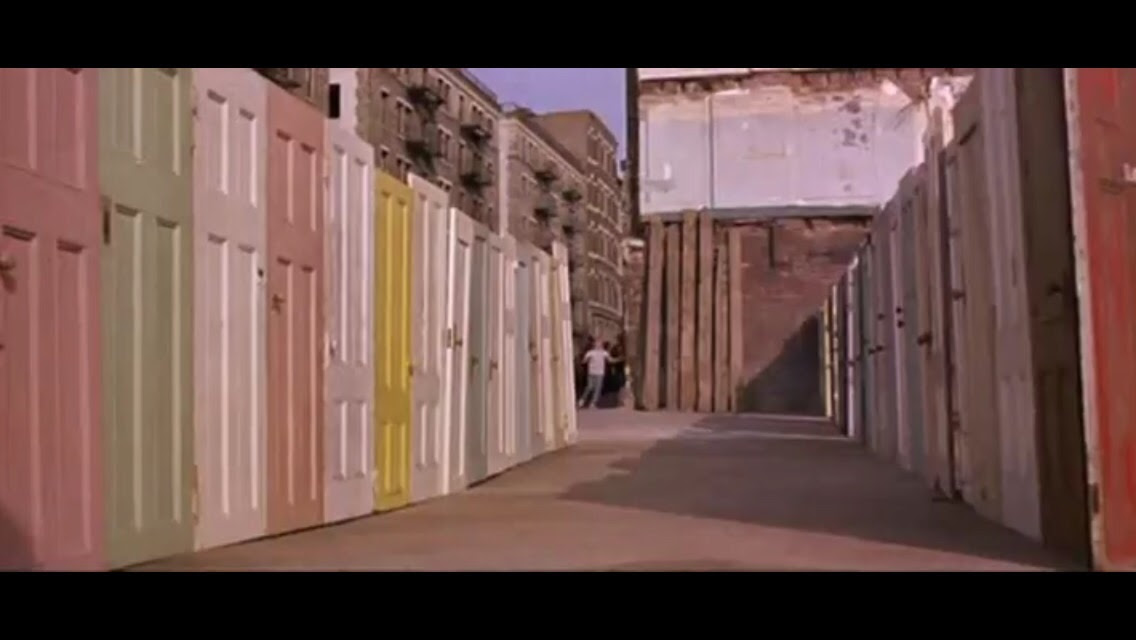 Here, lined up like a fence. It certainly gets more color into a somewhat bland exterior, but I wonder if there wasn't something more deliberate meant by all those doors? Assuming, of course, that they didn't happen to just be there at the location. I mean, the Lincoln Center Towers were being demolished, so the rubble was probably just there, but I wonder if they would pull out the doors first.

So, are those doors just, you know, there? Or, are they deliberate imagery to evoke... transitions, liminality, opportunity?

Other topics left behind:

West Side Story was supposed to be the first stage musical to include the word "fuck." There would have been no "Krup You" at the end of "Gee, Officer Krupke," for example. But, at the time, that would have limited the transport of the soundtrack over state lines.

Considering I just watched Singin' in the Rain last week, I should have spent some time on all of the dubbing going on in this movie. Like, we barely hear Natalie Wood's singing voice, and I believe we never hear Richard Beymer's singing voice. Riff's opening for "Jet Song" was actually Ice's voice.And, at one point in "Quintet" Marni Noxon was singing for both Maria and Anita.

But, the biggest missing topic for me is something that might be a stretch. Maria's line to Tony: "When you come, use the back door." On the one hand, taken literally, it's good advice for sneaking into the shop. 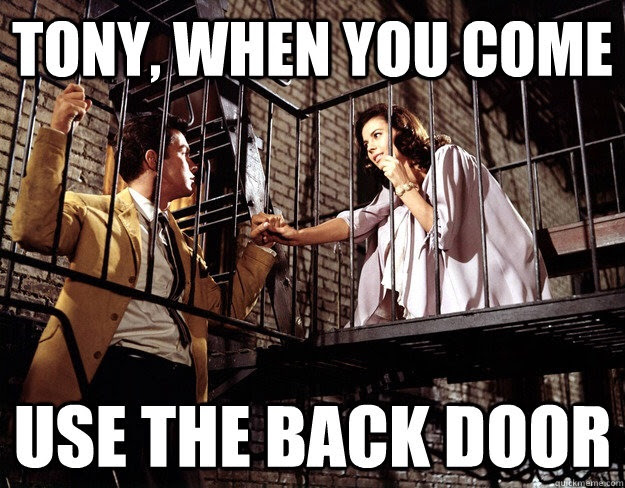 She could just be giving him practical advice. Or, considering they (presumably) have sex later, maybe it's sexual advice to avoid miscegenation. That sort of thing--the miscegenation--was not illegal in New York.

The implicit sodomy would have been, though.

It's interesting, though the segue may be offensive to some, that West Side Story, especially "Somewhere" has been embraced by gay audiences. In fact, while the usual origin story for West Side Story is an update on Romeo and Juliet by way of a Jewish girl and a Catholic boy, Rubin and Melnick (2007), citing Russ Tamblyn (Riff) from a DVD interview, tell us that the initial idea came to Jerome Robbins from Montgomery Clift, while at a party on Fire Island. "The sexual identities of Clift, Robbins, Bernstein, Laurents, and lyricist Stephen Sondheim," Rubin and Melnick write, parenthetically, "all gay, if not always admittedly so--raises interesting questions about how gay men in particular might have been attracted to the intermarriage plot as one way to process concerns about prohibited love relationships" (p. 112-113). Hull (2006) agrees, calling "Somewhere" specifically a "yearning for a time and space in which love that is deemed socially unacceptable can be freely expressed" (p. 60). Waitt and Markwell (2014) reiterate this point, suggesting that travel (i.e. immigration) substitutes for being a sexual minority as well; that is, being from Puerto Rico is the same as being gay, because you cannot be with who you want to be with. "Frequently," Waitt and Markwell write, "the travel is undertaken as a quest for a utopia, a place where one can be apparently 'free' from heterosexism" (p. 4). Munoz (2006) also writes of utopia, calling it "a stage [but not] merely a temporal stage, like a phase, but also a spatial one" (p. 11). Utopia is an idea of a time and a place where we are not divided by color or gender or sexuality. Utopia is an idea we can perform into existence. West Side Story offers us two characters--Maria and Tony--who are attempting to do just that, to perform utopia. The song "Somewhere" is all about that utopia.