you look pretty good for a girl

I'm trying to think if the quest to make The Dancing Cavalier counts as an external quest or an internal quest. In Doughton's (1996) terms, that is (or really, wherever she got those terms; she didn't invent them). Is starring in a musical--for Gene Kelly and Donald O'Connor, Don Lockwood or Cosmo Brown--masculine?

Singin' in the Rain certainly upholds binary gender roles, pairing off men and women... well, man and woman. If we ignore Cosmo for a moment, at least. Cohan (2000) suggets that several "binarized terms... dominate the entire narrative: body/voice, image/sound, naturalness/engineering, innovation/obsolescence" (p. 56). Cohan hints at some of the issues with gender later but doesn't list male/female among the binarized terms. But, clearly, the genders are distinct and unequal in the film.

Nevermind the stereotypical gender roles in the films-within-the-film, The Royal Rascal, The Duelling [sic] Cavalier, and possibly even more so, The Dancing Cavalier. Offscreen, Don is the one the reporter wants to talk to, Lina standing silently by. Don talks to the The Royal Rascal audience, keeping Lina quiet. Can't have anyone knowing that some aspect of Lina Lamont may be less attractive than the rest. Lina must remain entirely, and cinematically, female. Jean Hagen (Lina) is allowed to speak because on the level we're watching, her voice is a joke, a sign that she isn't good enough for our lead. This is Gene Kelly's film, and we've got to know right away that this girl is not right for him--

(It's unfortunate that when Don first actually interacts with Lina (in the scene in which R.F. shows up, no the western bar scene), he is actually the rude one. Some of his interactions with, and rejections of, Lina are justified, but that initial one, he's deliberately mean. And, we're okay with it because a) she already seems a little full of herself and b) we know Gene Kelly and know he's the lead and that lead has got to be a good man.)

--so that when he meets a new girl, in a classic romantic comedy "meet-cute" no less, the end of the movie we're watching has already been decided. Man and woman will get together. The rest is just details.

Those details include a couple rivals--both for Don's affection. Cohan (2000) argues, "At the start of the film, in short, Don is already coupled--with Cosmo." Further, Cohan says,

And, though we may have come to view cinematic masculinity a little differently in decades since, Gene Kelly was masculine. Citing "Richard Griffith's comments in a program for the Museum of Modern Art's tribute to Kelly in the 1960s" Cohan admits "the contradictory views of masculinity held together by [Kelly's] star image throughout his career." Cohan quotes Griffith: "Gene, a superb specimen of manly beauty, doomed, you'd say, to matinee idolatry, has neatly escaped from the trap of dancing and miming in such a way that you would never mistake him for anybody by an ordinary Joe" (1962, p. 3, quoted in Cohan, 2000, p. 69). "On the one hand," Cohan himself elaborates, 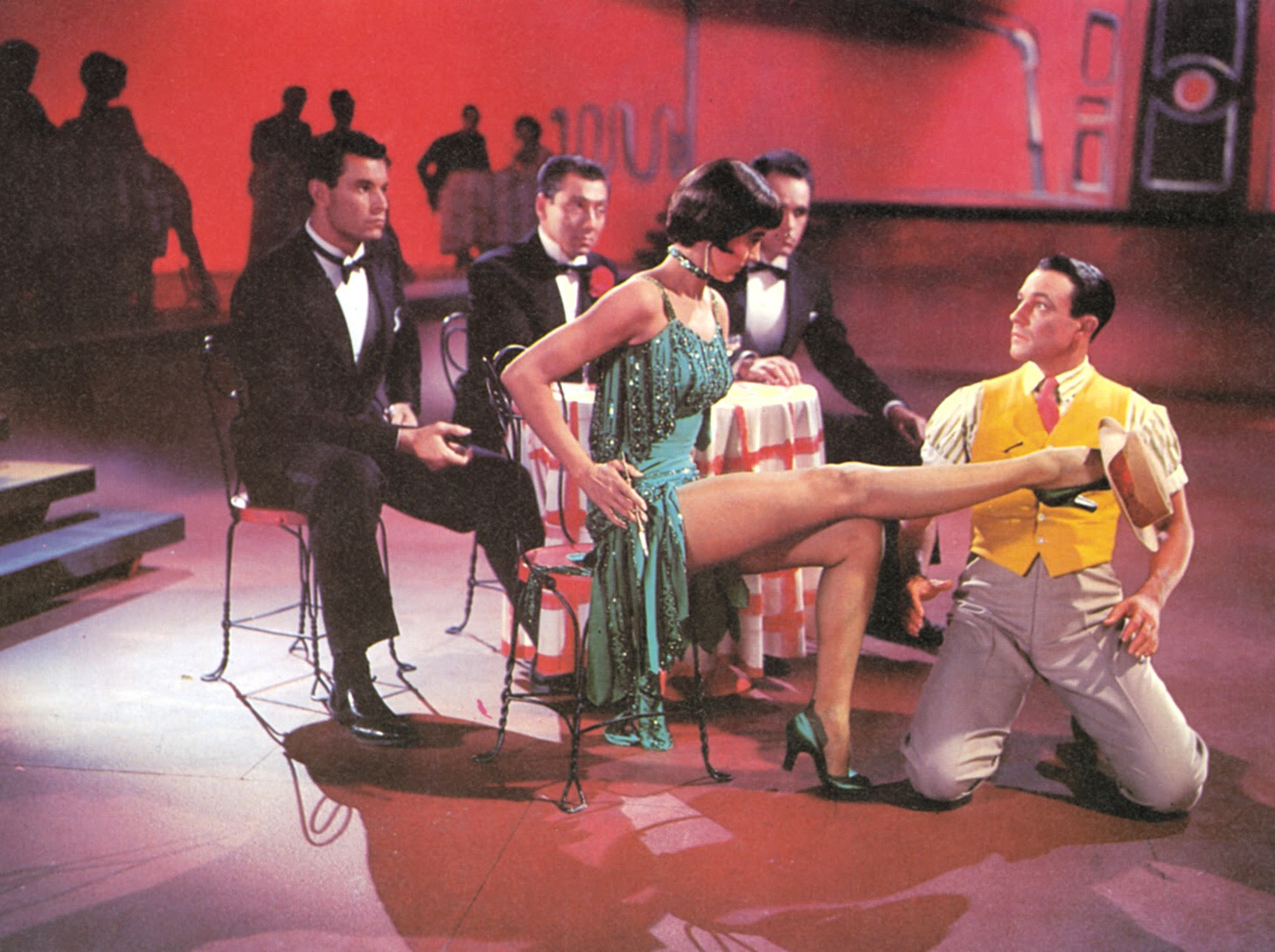 Speaking of sex objects, Cohan seems to suggest that the only specifically sexualized female in the film is Cyd Charisse (the dancer that replaces both Kathy and Lina in the "Broadway Melody" segment), "introduc[ed] by way of her long legs" (p. 63). Cohan argues, "the choreography and camerawork fetishize Charisse's body" (ibid). I would point out that while Kathy is introduced in her car, almost disembodied, she is reintroduced popping out of a cake (a visual that has, at least in years since, been connected to strippers and prostitutes) in an outfit just as revealing as Charisse's smallest. Kathy's costume for "All I Do is Dream of You" is not only quite revealing, it's got a pouch on the hip from which she offers treats to the partygoers. Charisse may have frills but Reynolds (Kathy) has treats.

(Lina, on the other hand, aside from her historical costumes dresses in flapper-type clothes, which tend to diminish and/or hide her physical femininity.)

But, back to Cosmo. At least twice, he takes the place of Kathy, first when he comes up with the idea that will drive the rest of the movie, her dubbing for Lina, then again when the curtain is raised to reveal Kathy as Lina's voice. And, in the amazingly danced "Make 'em Laugh" Cosmo notably dances with a sexless (and headless) dummy, acting quite girlish when he meets... it on the couch. I would suggest that Don is also effectively headless. He is responsible for none of the ideas that drive his career. Not since he stepped in for a stuntman has Don done anything active (that we see) to advance his career. Even, the two big ideas that save The Duelling Cavalier come not from him but from Kathy and Cosmo. Cosmo is dancing with Don. Cohan says, "Cosmo's ambiguous status as odd man out... calls into question the plot's automatic privileging of heterosexual desire" (p. 65). But, should we understand Cosmo as, say, a homosexual (potential) lover for Don, in competition along with Lina and Kathy, or is he something else? I wonder if there isn't room for Don and Cosmo to be two sides of the same coin, one a little more feminine, one a little smarter, one a little more athletic, one a little more... suave. On a figurative level, are they perhaps two halves of one complete character. (Are all sidekicks just aspects of our heroes?) Cosmo does not get to speak to Dora Bailey at the start of the film. He is offered up as an integral part of Don's past story, but then so is Lina offered as an "inspiration." Maybe Cosmo serves only as a part of Don's presentation of self, a bit player there only to help define Don. Maybe Cosmo is actually a figment of Don's imagination... or the id to Don's ego... but that actually lends itself to another conversation...