that's why i'm a mess

It's been a while since I've watched West Side Story...

And, it is late and, though I did manage a nap midday, I got up at 4am today, so I'm not sure I will really say much today.

(Took members of the speech team to volunteer at Midnight Mission for their 6am breakfast service. Then, was home for a bit, then to campus for some office hours and performance studies class which ran right up until 10pm. Drove home and turned on--drum roll, please--All That Jazz. I don't know if I was mixing it up with Chicago in my head, but I was thinking that All That Jazz was a musical, not just, you know, about a musical. Had a whole paragraph written--said something about Gideon's constant cigarette--then realized my error. I admit, I am no film expert.

Anyway, settled on a replacement musical, and it's on now. I will be up very late. And, I've got an 8am class tomorrow. It's speech day, so I don't have to be entirely on my game, as it were, but I do have to be alert and ready to listen. And, I'll be at school all day tomorrow. Going to have to sleep all day Thursday.

Except I need to get a brake pad replaced, and take Kieran to a doctor's appointment, and work on the final draft of the prospectus for my master's thesis...

Plus, to make tonight even more annoying, I plugged in my iPod to update its contents because I hadn't in a while, and iTunes was acting like my music was all gone (little exclamation points next to every single title), so I re-added everything, but inadvertently did it twice because the computer reset because of Windows updates right in the middle of it, so now every title is there twice, and I have no idea what's on my iPod.

First World Problems, for sure.)

In the meantime--because, while I really am trying to convince myself not to have much to say on this first day with West Side Story--you can have a look at yesterday's rather long entry.

(I considered just pretending I hadn't made that All That Jazz error, but if I cannot be honest about such things in this blog... well, I don't think I could keep doing this.)

Anyway, while the movie will still be on for a bit, I'm done writing for tonight. Looking forward to not only discussing gender roles but racial/cultural/ethnic identity issues as well in regards to this film. 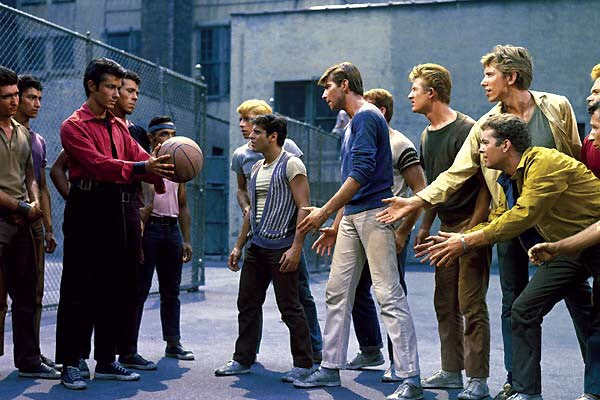