where the rich played with the young and beautiful

Moulin Rouge! is a movie. I don't mean that the obvious way because, well, that's obvious. I mean that the movie is almost constantly separating itself from the usual emersion and suspension of disbelief. It throws its contents in your face and then takes everything overboard so you cannot help but keep looking even as you recognize every falsity.

The opening shot, for example, is a theater proscenium and the orchestra conductor conducts the Fox logo after the curtain opens. This framing device is deliberately artificial.

But, that one's obvious.

Less obvious is Toulouse's role as pseudo-narrator. The opening lines are his, and yet the rest of the movie tells us that it is Christian telling us this story. This means that Toulouse is telling us the story of Christian telling the story of, well, all the events we see. And, Toulouse is within that proscenium. Get into "Spectacular Spectacular" and you're several story levels deep. And, Christian is effectively a character of his own making as much as he's a creation of Baz Luhrmann and Craig Pearce.

(Another level of artifice, that I only just noticed, when Christian is introduced to the Bohemians and he sings "The Hills Are Alive", the play they are staging is closer to the puppet show from The Sound of Music than it is to The Sound of Music itself.)

Plus, since this is a musical, you get regular interaction between the performers and the audience. Dance numbers and songs are staged toward the fourth wall, and certain lines seem more meant for the audience, perhaps, than for, say, Christian. For example, Satine (Nicole Kidman) tells him/us: "I'm paid to make men believe what they want to believe." This might as well be Kidman's line as much as it is Satine's.

(I was just distracted by a little research. I was searching a transcript of the film, remembered that I hadn't looked up whether the "revolution" mentioned at the beginning of the film was reference to something specific, then got into some reading about the real Moulin Rouge. Interesting tidbit: the manager of the Moulin Rouge when it opened in 1889 was Charles Zidler, and he died in 1897 (two years before we see here the fictional Harold Zidler).)

I actually meant to get into a Marxist critique of the film today--something about the Bohemian artists and rich people like the Duke who came to the Moulin Rouge for courtesans like Satine. Even today, it remains a tourist attraction. In his review of the film, Roger Ebert recounts:

Like almost every American college boy who ever took a cut-rate flight to Paris, I went to the Moulin Rouge on my first night in town. I had a cheap standing-room ticket way in the back, and over the heads of the crowd, through a haze of smoke, I could vaguely see the dancing girls. The tragedy of the Moulin Rouge is that by the time you can afford a better seat, you've outgrown the show. (Ebert, 2001, June 1)

The Moulin Rouge is a place where the rich come to exploit the poor... or rather a place where the poor can come to be exploited by the rich. Artists like Toulouse or writers like Christian or dancers like Satine--their Bohemian lifestyles (well, maybe not as much Satine as the others) leave them vulnerable to the rich. In terms of art, music, theater, Toulouse et al do own the means of production, but this is a production that can only be afforded because their are "bourgeois pigs" like the Duke out there to finance it. This love story would not happen but for the grace of the Duke... and 20th Century Fox. The film cost $52 million, and yet it speaks to a truth about existing outside the capitalist patriarchal systems of the world... Moulin Rouge! offers a place where outlandish characters like Toulouse and Zindler and the Unconscious Argentinean and the the bald pianist (more on him in a moment) and the top hatted old guy (figuring out some of these character's names is difficult) can exist right alongside all those rich men in their fancy suits. And, on some level they are accepted. But only because they can be used. They can make the Duke even more money than he already has. They are wage slaves, paid, perhaps luckily, to do something they enjoy, but because they are paid, when the Duke tells them to change the ending of "Spectacular Spectacular" they must do it.

(As Christian and Satine sing their love song medley, it occurs to me that falling in love so quickly is just one more trope of romantic films, of musicals, of film in general... except, contrary to my own theory I know that falling for someone can happen pretty damn quickly. It's not love like in the movies, but really, in the course of a single conversation, a person who was objectively attractive can become quite subjectively beautiful. I know an intelligent, witty, interesting (and interested... in the world, I mean), beautiful girl--and she would hate being called a "girl"--who did just that for me once a while back. She was just someone else I knew in passing at school, and then one night, she was revealed, as if a Hollywood scriptwriter was right there writing the whole thing, into something... else.

But, nevermind that. Love--the thing we call "love" in movies--that doesn't happen in real life, not like that. Not so quickly, not so suddenly, not so madly.)

The bald headed pianist would not be so interesting if he were not, at one point, joined by several more bald musicians. There's no explanation for this, and one might expect that it is just a strange affectation decided in the script or by the makeup and hairstyling department. And, then I wondered if there wasn't something else to it. Maybe not deliberately, but perhaps serving a specific purpose nonetheless. Perhaps just because I have read George R.R. Martin's Song of Ice and Fire books and watch Game of Thrones, I connected the bald musicians with court eunuchs. A brief bit of research, though, and I confirmed that in actuality eunuchs don't automatically go bald. They can have quite normal heads of hair. Still, I compare these bald musicians, serving Zidler and the Moulin Rouge, to the Duke's men (seen mostly during "Like a Virgin") with their well coifed hair and matching outfits. And, I see what must be a deliberate disparity in appearance. If nothing else, these musicians lack the facial hair of, say, the Unconscious Argentinean or the old guy with the top hat or Harold Zidler, because it removes them from the main story, with its commentary on the binary of male/female. Christian has no facial hair, but he is portrayed almost completely as an innocent sucked into a world too complex for his naïveté. Also, recall Cohan's (2000) argument (cited in part before) regarding Gene Kelly in Singin' in the Rain--

...at the same time that the athleticism of his dancing, like the aggression in his screen persona, tries to compensate for the eroticization of his body, his dance numbers stage a bisexual address to the film audience, because 'the virility of his dancing', as Hirschhorn [1984] terms it, is directed at men and women. (p. 71)

Perhaps, then, Ewan McGregor's Christian has no facial hair so he can be more readily eroticized by both the men and women in the audience. As I write this, "Roxanne" is beginning and the Unconscious Argentinean's blatant aggressive vocal style is so obviously counter to Christian's softer vocal stance throughout the film, it is difficult to argue that the film does not expect us to find one to be more masculine than the other. 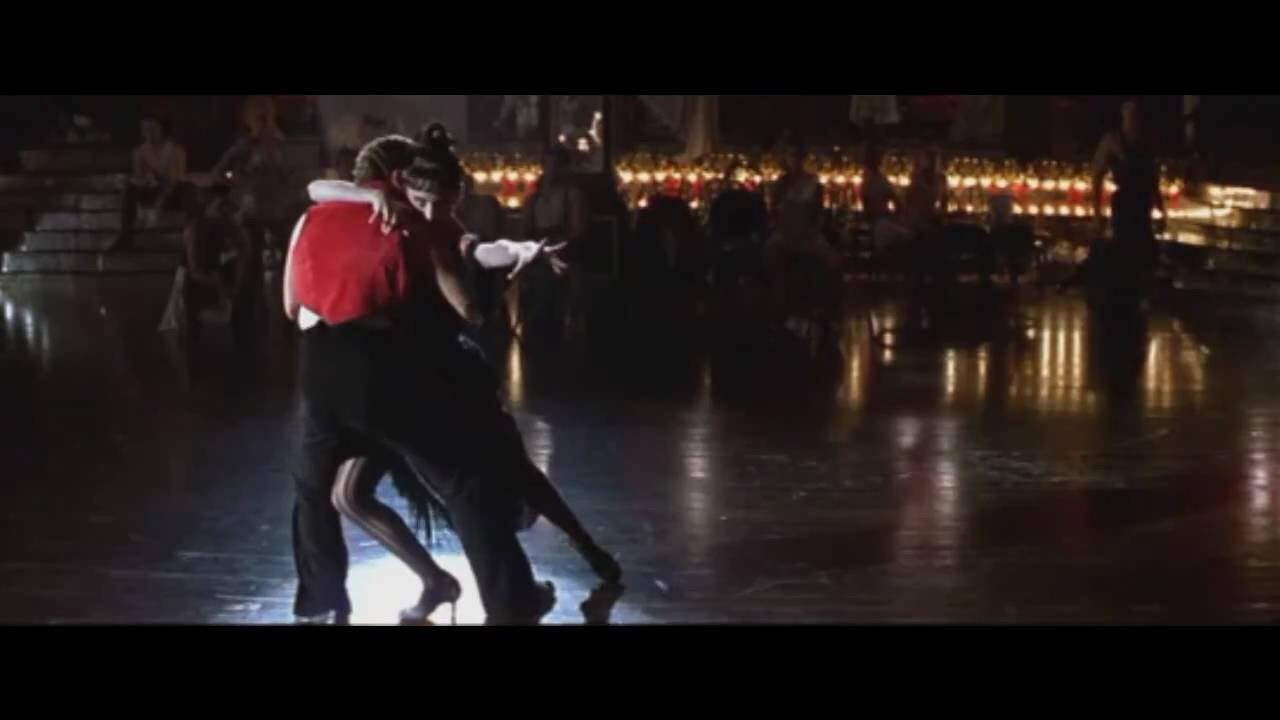 Except, I don't accept what the film is telling me. Or, at least, I do not value this masculinity as society might want me to. Masculine it just a label. And labels change, labels can be ignored, dismissed, erased, altered, destroyed. Labels are just words and as much as I value words, being a writer and teacher of communication, I do not accept that any words are immutable.