the greatest thing you'll ever learn...

I mentioned the other day that "musical" is not really a genre. Singin' in the Rain is a bit of a romantic comedy but West Side Story, while still a romance, is far from comedic. Moulin Rouge!, also romantic, lets us know right away it is going to be a tragedy. One of the musicals I've been considering for next week--Repo! The Genetic Opera is a bit of a bizarre science fiction... thing. (I'm also considering Once or Across the Universe.) Though, to be fair, it has something like romantic elements as well. But, anyway, backtrack to this week.

Like Singin' in the Rain, this film is built around songs that already exist. But, unlike that previous film, Moulin Rouge! mixes and matches songs from numerous artists, differing styles, and a fairly large range of time. We've got Nirvana, Madonna, Sting, DeBarge... and many more. The only original song in the film is "Come What May."

It helps to understand that fantasies have a lot in common with mythology: they are stories that people become attached to for a variety of reasons, they satisfy some sexual or psychological need or want in our (probably only partially conscious) minds, they are rich in symbolism and emotional texture. These are the stories that dreams are made of. (Easton & Hardy, 2001, p. 80)

The fantasy of Moulin Rouge! is augmented by the fact that it is self reflexive like Singin' in the Rain. It all comes across so very familiar. As Roger Ebert put it in his review: "The film is constructed like the fevered snapshots created by your imagination before an anticipated erotic encounter." Imagination fueled by years of popular culture. Driven by whole lot of moments of Feuer's (1995) "illusion of spontaneity" Moulin Rouge! deconstructs itself by building "Spectacular Spectacular" in front of us, not to mention grabbing lyrics from familiar songs from the last few decades, shoving them right up against each other and somehow forming an original (?) whole out of the used pieces. But, we want that fantasy. There's a reason these songs appeal to us, a reason this beast built from their parts appeals to us. I mean, in addition to Luhrmann's visuals. The words latch onto familiar parts of our memories and our dreams, the romantic visions that pop culture has been feeding us...

And, that we have been feeding right back into pop culture, of course. It is not a one way street but a twisted mass of tentacles feeling into us and into the popular culture and growing them both together so that our fantasies have so much in common, regardless of our individual shades, that we can enjoy a nice romance that hits the same notes as most any romance does. We've got a "sexual or psychological need or want"--all of those, actually--for this story to play out for the good. Even if we're not as romantic as--or don't consider ourselves to be as romantic as--Christian (Ewan McGregor), when he tells the Duke that the play is about "love overcoming all obstacles" we get that. We want that, even if we don't believe in it. If we're in the theater--and, alas, I never saw this one in the theater, even though I was alive for its release and I rather enjoyed Luhrmann's previous films--in the dark, separated from our daily lives, the dark of the theater like the pressurized hull of a plane or a submarine... we can pull away from the worries of the world, and play these parts vicariously. We are Christian and Satine (Nicole Kidman), in love despite the odds, despite the practical affairs of financiers and disease. Love will overcome all obstacles for the next couple hours at least. Then, we can depressurize back into the real world, leave the fantasy behind... maybe. Or maybe it sinks inside us and keeps us wanting that great love, or the closest approximation to it that we can. Keeps us latching onto the fantasy, a self-perpetuating cycle.

Meanwhile, the lavish sets and the energetic choreography and frenetic camera movements keep us on the edge of our seats, excited, enthused, aroused. And, the fantasy of love is reified. And, it doesn't matter how realistic it may be, dancing on the clouds, amusing the man in the moon, singing anachronistic tunes on a giant elephant--all of these things just make it more appealing. If you've never been in love, you dream of the fireworks, the music coming to a crescendo. If you have been in love, maybe you yearn for that feeling again. It's not real but subjective, pleasantly subjective. Though the lyrics are familiar, though the situation is familiar, the film "doesn't depend on dialogue or situation but on the way you imagine a fantasy object first from one angle and then another" (Ebert, 2001). I would alter that slightly; the film depends on "the way you imagine" that fantasy object, the object being either Nicole Kidman or Ewan McGregor, or even Paris, the Moulin Rouge itself. It is deliberately subjective even as it plays with ideas we've all been fed. We take it in as our own fantasy. You are Christian or Satine. I am Christian... or Satine, allowed to be with this beautiful fantasy object, objectified in scene after scene by Luhrmann's camera. As Ebert phrases it, Satine is "seen not so much in dramatic situations as in poses--in postcards for the yearning mind." 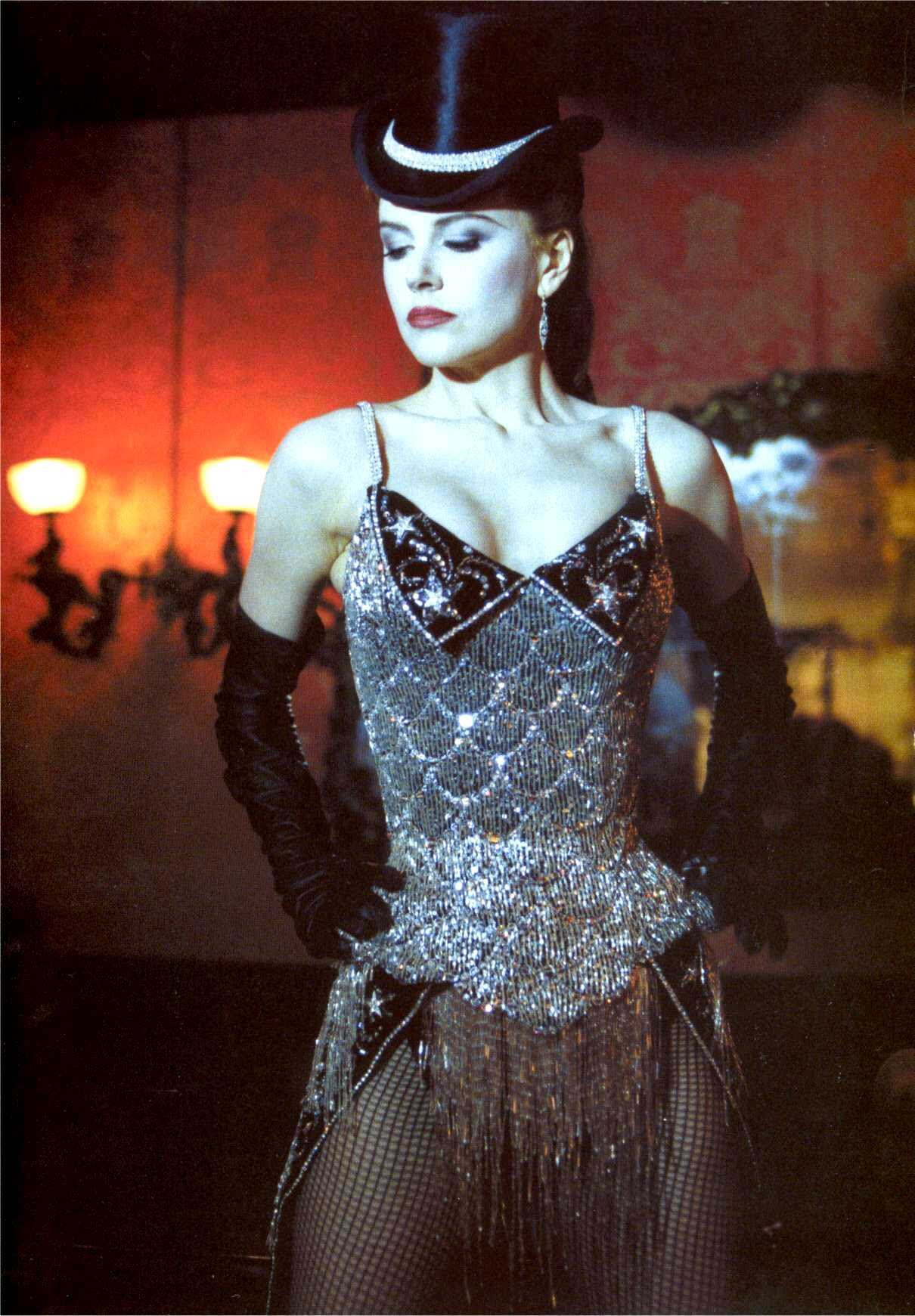 I would argue that Christian is photographed much the same way, though not as often. "The movie is about how we imagine its world," Ebert writes. But so much of what we imagine is prescribed for us by years of other romantic films, other musicals, songs on the radio, stories that tell us about love and what it means, that it's real and it's powerful.

The film builds its fantasy world on our expectations and our familiarity (see my theory of relationships) and it ingrains itself in the very fiber of whatever bit of our brains, our hearts, our soul (if you will) is worrying about love.