"If you ever hang out with 30-something pagans, you will quickly learn that The Craft (1996) was a lightbulb moment for many of them," begins a piece by Ginnis Tonik at Women Write about Comics. Maybe--flashback to yesterday--the film isn't quite feminist, but it make sense that it would have drawn a lot of young girls looking to express themselves, express their power, to witchcraft. To something other than the usual patriarchal religions that have ruled so much of the world and its history. 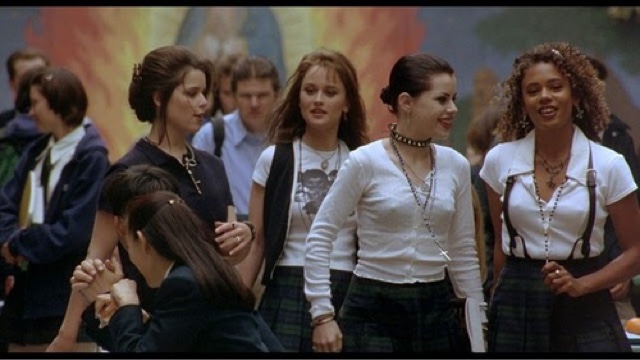 I mean, it's no accident that the film makes so many clear and deliberate references to Christianity. From the snake presented to Sarah (Robin Tunney) early in the film to Nancy (Fairuza Balk) walking on water. Hell, I could easily get a good Cinematic Christ-Figuring going with this film and Sarah would score seriously high.

But, I'm interested in the film on both a far more superficial level and on a deeper level than cheap (and rather ironic) Christian symbolism. Despite my "maybe" above, I think this film is quite feminist. It's vocabulary is simply limited by its setting and the era it was made. This was less than a year after Clueless, for example. You cannot expect the vocabulary of that film and this one to be that different. One is a simple high school romantic comedy based on Jane Austen's Emma, the other is effectively an update of the corruption of Eden (OR a fairly straight coming-of-age story but with magic and high school drama) set among high school girls.

Bruce Hall at Box Office Prophets complains that Rochelle (Rachel True) only "has to deal with exactly one racist bitch of a classmate" because that doesn't make her Rosa Parks. Because, not only must we reject the film as feminist, we must be sure to reject it because it cannot fill its screentime with a treatise on systemic racism in addition to everything else. (To be fair, the film tries to deal with poverty, but only manages to touch on it in a shallow fashion.) Actually, the film sets up each of the four girls against a singular antagonist. Nancy has her stepfather (or mother's boyfriend, at least), Rochelle has Laura (Christine Taylor). Sarah has Chris (Skeet Ulrich) (who has just the right name to be sacrificed). Bonnie (Neve Campbell) has an antagonist that is a little more abstract and closer to the point for all of them; she has scars that make her feel unattractive... And, here is where it's easy to argue the film isn't feminist. These four girls want to be beautiful, want money, want success, want to get with boys and be liked by other girls. This couldn't possibly be related to feminism because those are things you want in a patriarchal society.

But, consider what they actually ask for. Rochelle asks "for the ability to not hate those who hate me." She specifies, "Especially racist pieces of bleacher-blonde shit like Laura Lizzie." Sarah asks "to love myself more and to allow myself to be loved more by others." And, she adds as an afterthought, "Especially Chris Hooker. I know, it's pathetic." Bonnie asks for the power "to be beautiful outside as well as in." Of course, Nancy asks for "all the power of Manon." She's the one asking for too much. But, even that is not not feminist. Rochelle wants to not hate. (And even when they take Laura's hair and do something directly to her, Sarah specifically says that if Laura leaves Rochelle alone, nothing bad will happen.) Sarah wants to be loved. Bonnie wants beauty, sure, but look at that wording; it isn't just superficial. The realization of the powers they ask for/claim may be a little less altruistic. But, if it weren't, there wouldn't be much of a story here. Well, not one that would do so well at the box office.

Instead what you get, what really makes it feminist, is a film filled with women. The four leads, Bonnie's mother, Bonnie's doctor, the shopkeeper. The men are either ineffectual (especially in relation to the plot) or actively antagonistic. Plus--and this is what really matters--Laura and Nancy are also actively antagonistic, Nancy's mother is ineffectual. Like Michelle Wolf put it recently on The Daily Show regarding Wonder Woman, "You know when we'll feel like women are equal at the box office? When we get to make a bad superhero movie and then immediately make another bad one." The way I see it, what makes this film feminist is not that it's protagonists all seek to upset the patriarchal order and transform the world.. What makes it feminist is that they choose what they do regardless of what the men around them want. They make their choices, and aside from Chris, once Sarah seeks to undo the spell she put on him, the men in the film all but disappear.

Chris, of course, is a sign that this feminist vision is the fantasy of men. Written and directed by men. The danger of women gaining power and all that.

I'll end with this, from Doug Wick, producer of the film, in an oral history with Huffington Post:

I've always been very interested in female empowerment, and my first movie was "Working Girl." I was sort of thinking about teenage girls and [how] suddenly they come into this enormous power of their sexuality, and how to maybe make a movie about that. I was very aware that [witchcraft is an] age-old metaphor for talking about female empowerment, and the sort of mysteries of women and their connection to nature in terms of reproductivity.

Peter Filardi, who wrote the film along with director Andrew Fleming, was apparently really into magic at the time. And Satanism. In that same oral history, he explains:

I remember telling [Doug] that magic was historically a weapon of the underclass. It was originally practiced by people of the Heath, or "heathens"--poor people without the power of a king, army or church behind them. Out characters could not be popular, beautiful overlords of their school. For real magic to work, they would have to be outsiders with more than desires. Real magic requires need.

He later specifies, "It was a film about the power of adolescent pain."