you can't just order me

You know what sucks? Not many female-centric films that are a) good and b) not explicitly (or obviously implicitly) feminist. Hell, tonight's has a woman invading the men's restroom within the first five minutes. (And, Jack (Harrison Ford) will be in the women's restroom later.) If that's not symbolic of what's to come, I don't know what is.

It's Working Girl, by the way. 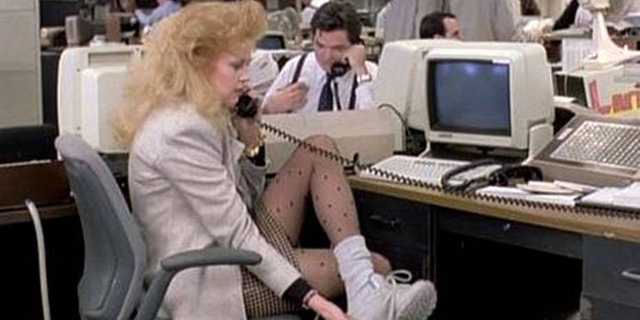 It has been a while since I've seen this movie. I'm turning to the likes of Bitch Flicks again rather than my memory. Robin Hitchcock, returning to the film after a number of years, describes the film as "a product of its. time, when feminism meant a white lady achieving all the power and success normally reserved for white men." Her piece all suggests problematic areas like Tess' (Melanie Griffith) makeover, "putting down... woman [other than Tess] who've eschewed standards of feminine beauty and sex appeal. It's another aspect of Working Girl claiming progressivism while reinforcing the status quo." Or, Katharine's (Sigourney Weaver) presenting one of Tess' ideas as her own is presented as a horrible thing but Tess presenting herself as Katharine is... well, she says it better than I will:

Tess is also portrayed as superiority to her boss, Katherine [sic], who becomes a villain of the piece by passing off one of Tess's ideas as her own. This deception makes Katherine [sic] a cutthroat bitch who will do anything to get ahead. Meanwhile, the ethics of Tess passing off Katherine's [sic] entire LIFE as her own, are barely questioned. And Tess's questionable moves to get ahead (notably, crashing a wedding to get face time with a business prospect) are just spunk and moxie.

And revenge, of course. Tess' thing comes after she learns about Katharine's. And, America and Hollywood love revenge. Plus the easy shorthand for feminist is, regardless of the race thing, a woman achieving all the power and success normally reserved for a man. Of course, for Tess to rise, she must step over Katharine, she must leave behind her "working class roots" and make herself over as someone new. (To match her "head for business" of course, but still....) As Monika Bartyzel at The Week puts it:

Working Girl reminds us that Hollywood generally likes to balance progressiveness with the recognizable and often regressive. Working Girl [strives] to present a. Modern scenario within an old-world context. The businesswomen (figuring out the actions, attitude, and presence that would bring them success in a man's world) [are] matched with the tropes of fairy tales: The powerless ugly duckling who becomes a sexy, or restive Wan in a power-battle with the evil witch and ends up coming out on top.

Of course, Bartyzel makes the obvious point, that "[n]arratives will always seem more progressive when they're released, and much less so 25 years later, when society has evolved." In 1988, Working Girl really was progressive. Same decade as so many tester one-driven action films, as Wall Street, and here a woman with a mousy voice and (initially) some really big hair, breaks into the boys club, beats her female boss up the ladder. It's a how to for advancing in business if you're a woman. Maybe it's not the best how to, maybe we've been improving (or trying to improve) on its ideas for a few decades since, maybe we haven't really gotten anywhere, maybe we're going backward. But, at least this movie's trying.