in the shadow of his ass

A few complaints before I move on from Thelma & Louise:

The simple ones I mentioned in brief parenthetically yesterday. When Thelma and Louise need money, Louise needs Jimmy to get some to her. The talking through of their relationship that comes after her call to Jimmy is an interesting scene, and I'm not sure how the film would really play without it. Louise needs to realize both that she has that relationship waiting, that there is a chance for her in the regular world, and that--remember, when she can't tell him what's going on, Jimmy gets angry and breaks a lamp--even this relatively healthy relationship has an obvious problem: Jimmy is still a male, in a world where men can rage with jealousy and it's accepted. She keeps something from him and, generally speaking, we're supposed to see that as wrong. Here, she's actually protecting him from getting into legal trouble. But Jimmy is still of that man's world, and you don't keep information from your man in that world.

The other simple one is something that actually could have just worked a little differently and added to the feminist angle. Instead, it sort of detracts from it. In the motel room with JD, Thelma asks about how he robs banks, and he goes through his polite bank robber routine. She copies it virtually word for word at the convenience store later to replace the money he took. But imagine this a different way. Imagine that instead of learning how to steal from this man, instead of falling for him and getting taking advantage of, imagine Thelma stealing from JD instead of that convenience store. The only plot-problem then is the number of cops involved at the end, but for the real metaphor of how hard it is to be a woman in a patriarchal world to work... Think about it like this. What if all Thelma and Louise did was kill Harlan, and the world of men still sent all those police cars and those helicopters, because when you are a woman you DO NOT step out of line, you DO NOT refuse a man's advances. Hell, in North Carolina now, you barely can already. Stephen Tobolowsky's FBI guy isn't wrong when he tells Harvey Keitel's detective, "These women are armed, Hal; This is standard." At that point in the film as it is, they have killed Harlan, they have robbed a convenience store, they have robbed and locked up a police officer, and they blew up that guy's truck. But, had JD not stolen their money--or had Louise has access to money without having to turn to Jimmy in the first place--that chain of events might never have happened. How much stronger might the message of been had the male overreaction come from just the singular crime? 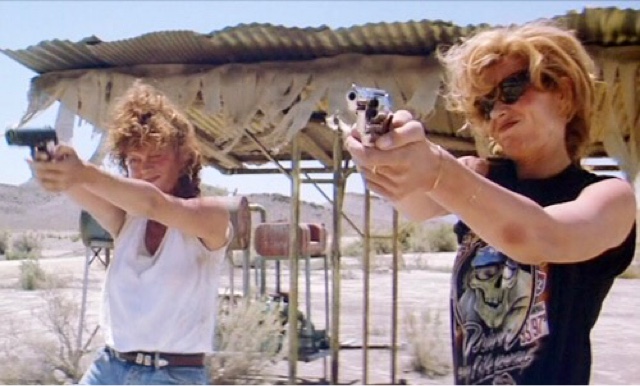 And, then there's the big one. And, since the screenwriter was a woman, I am hesitant to complain about this particular thing in this instance. So, I'll turn to a piece from Teresa Jusino at The Mary Sue from last year. An unnamed female writer says, "[Rape has] become shorthand for backstory and drama. Everyone knows rape is awful and an horrific violation, so it's easy for an audience to grasp." Now, Thelma's near rape is important to the plot. She and Louise are not two women who would exit their lives like this but to go fishing. These are two put upon women who aren't really looking to rebel in any big, meaningful fashion. Harlan forcing himself on Thelma is the trigger for more. And, sure, Louise's backstory of being raped herself is easily the reason that she shoots him, but the problem there is the "easily" part. Maybe I'm doing the thing I complain about others doing--wanting the film to be something it just isn't. Like, instead of a road picture with sprinklings of a feminist plot, I want to be a more absolute denunciation of the male-dominated world. Like just the fact that Darryl is such an uncaring asshole is enough for Thelma to want out of her life and out of the patriarchal world. Jimmy's inability to commit, his jealousy, even if he is otherwise apparently rather nice--that could be enough for Louise to want out. Harlan was too much long before he got Thelma out into the parking lot. An opportunist like JD, preying on women venturing into a world foreign to them--he's just as bad on an abstract level. In story terms, anyway. Obviously not in reality. It just feels a little too easy that Louise was raped so that makes her just willing enough to shoot Harlan that all of this snowballs. Why can't she just shoot him because he's a rapist? Why can't she just shoot him because he's pushing himself on Thelma, before it even turns to rape? Why can't she just shoot him because he's a man?