she isn't having any fun

Thelma & Louise is one of those obvious titles, when you try to come up with feminist films. I was actually surprised watching the film today after many years since I last watched it, just how much of the film is virtually unrelated to the feminist core. It's that incidental feminism, or whatever you want to call it. Like if the leads were male instead, the plot wouldn't be that different. It would still be a road picture, there could still be the incidental violent act that sends the leads on the run. And, I take a moment to think of a male-centric example of the same and the first film that came to mind is The Legend of Billie Jean, which is entirely a feminist film. I know Bonnie and Clyde makes for a good comparison but it's been a while since I've watched that one, too. My mind turns to Kalifornia or Wisdom, though that isn't really a "road picture." To Hell or High Water, Natural Born Killers... So much crime, deliberate and incidental. Thelma & Louise fits right in.

But, with a clear gender divide at its core. The initial crime happens because a guy tries to rape Thelma. Thelma theorizes that Louise's past problems in Texas also had to do with rape. Thelma is afraid of her overbearing (and abusive?) husband, while Louise's boyfriend is noncommittal. 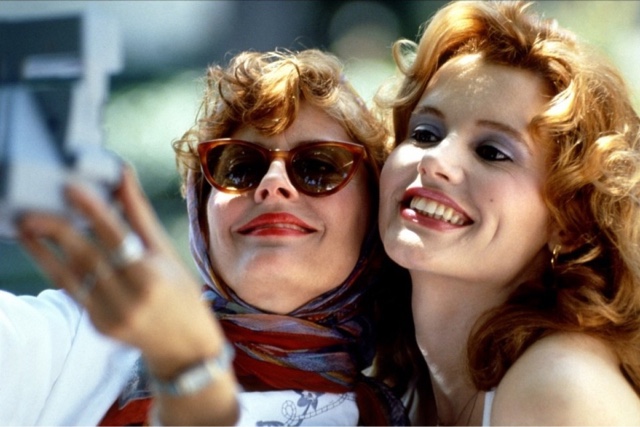 But, just for its leads, the film is... transformative? It transcends the simplicity of its setup just by being about two women, working class women no less, in 1991. Like the difference between The Secret of My Success and Working Girl.

It's almost too easy. I wish I had been writing as the movie was playing earlier (but my screens were limited at the time), so I could talk about the movie as a movie, avoid the sociopolitical angle for a bit only to loop right back into it...