spare me the women's lib crap

Subtitle: thoughts on the film without the politics... if that's possible.

For example, the costumes: Judy's. Outfit is far too conservative, far too reserved. While Violet's is looser, with a looser, Chinese pattern. to it. Her outfits are loose, practical, but her colors are subdued. (I rather enjoy Grace and Frankie and that's totally, if deliberately not explicitly a reunion of these two characters... Except I cannot imagine that Frankie ever worked an office job.) Doralee's costumes are somewhere in between, and far more showy.

The office is stale, too practical, visually something out of the 50s with rare elements from the 60s--like Mr. Hart's office, a lot of Browns, a wood desk, wood paneling, but then some chairs that feel more modern (for 1980). One of the big changes, visually, later with the three women making the decisions, is that the office takes on a lot more color--very 70s.

And, there's the scarf. Violet has to buy it for Mr. Hart's wife. But, Doralee gets it. Later, it is this same scarf that both Doralee and Judy shove into Mr. Hart's mouth and (possibly deliberately) it matches the S&M getup they've got him in to keep him prisoner... which to comment on that might get a little into the politics, but it's almost impossible to talk about this movie without the politics. Short story short, he is silenced by one of the central elements of his abuse of power. (That same red, white and blue color scheme matches Violet's fantasy Snow White outfit as well, which of course has a yellow skirt, matching both the the yellow of Mr. Hart's mug and the Skinny and Sweet and Rid O Rat boxes (more on those below).)

The names stand out, too. Consolidated Companies, deliberately both generic and exactly the bullshit name a conglomerate (the business of which is vague) in 1980 might have. Violet is the one who gets passed by for promotions while training her replacements. She is not a shrinking violet on purpose, but society forces her into that role. But, more interesting early on is Mr. Hart. Especially because he has the head of a deer (a hart) on the wall of his office, one which he dismisses (despite the implication of him being a hunter and that being a masculine ideal) as the result of a "lucky shot." This is a bit of foreshadowing, of course, because he's going to be the prey they capture later (after a string of mistakes and coincidences, effectively a "lucky shot." Plus, in Judy's fantasy bit, his head literally takes the place of that deer.

The shorthand for Mr. Hart's evils is simple. Orders Violet around like a secretary, sexually harasses Doralee, threatens Judy on her first day, plus he seems to have no real relationship with his wife, though he buys her furs (or she buys them with his money) and scarves (which end up in the hands of the woman that everyone thinks, and he wishes, is his mistress).

One simple scene of Violet at her desk, and we can see her expertly juggling her work and her four kids. 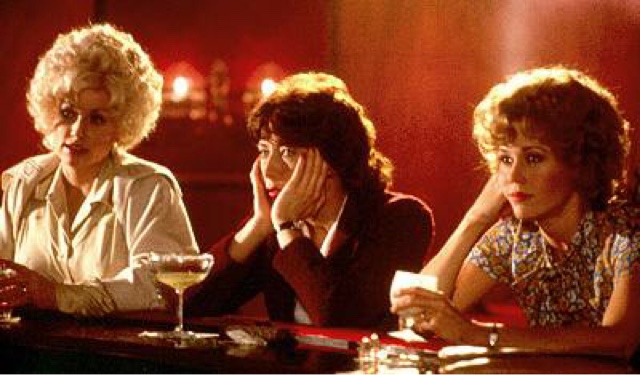 Even the existence and mixup of "Skinny and Sweet" and "Rid O Rat" is part of the satire. The generic but eye-catching packaging is straight out of the 60s and 70s. And, the existence of a sugar substitute like "Skinny and Sweet" points to an office culture the requires people (women) to drink a lot of coffee just to survive and not gain weight. Which gets us right back into the politics again, if we're not careful, because of course women have to do the work and look great while doing it and raise four kids but men need the promotions because clients want to talk to a man when figures are involved, as Mr. Hart explains to Violet. The irony being that Violet (and Judy and Doralee) clearly understand the figures of whatever it is that Consolidated Companies does better than any of the men.

The thing is, you cannot really talk about any of this film without being on the brink of politics. Even the fantasy sequences--Judy's echoes a lynching, which could be potentially problematic; Doralee's positions her as boss but also rodeo cowboy, a masculine role; Violet's steals its visuals from Snow White, the most popular version of which has the titular heroine cleaning up after seven working men (however diminutive in size they may be) and keeping house because that is what a young girl does when she runs away from home, and that same fantasy ends with all three women dressed as princesses, as if that is victory. The reality is that Violet only accidentally (and only nearly) poisons Mr. Hart, though Doralee does get to hogtie him. There will be no lynching, of course. Rather, Mr. Hart will get the credit for the improvements on his floor and be rewarded (sort of) with a reassignment to Brazil.

I don't even mind the change from satire to farce in the second act. Some reviews seem to have a problem with this. But, it almost has to make this change, to make the plot more palatable. Originally, Patricia Resnick's script was darker--the women actually tried to kill their boss. Resnick tells Rolling Stone, "Jane [Fonda] has been concerned that would be too dark" so Resnick showed her Chaplin's Monsieur Verdoux, a film that asks its audience to sympathize with a murderer. Fonda was still concerned the women here "wouldn't be sympathetic enough." Director Colin Higgins broadened the comedy, and I think that is part of why the film resonates. The film itself is a fantasy. Give women some power, and whether or not you give them the credit, they make their world a better place. If men would just get out of the way. (You know, stay at home to watch game shows and read soap opera magazines (like Mr. Hart).) Make it a drama or a blacker comedy and it might hit harder, but it might be more easily forgotten, less easily re-viewed. As Resnick explains, "Jane [Fonda] had piles and piles of documentation about clerical workers, but she knew she wanted a comedy because it would make the social message more palatable."