just because they're cute

Early in France's Ha, France's quotes Sincerity and Authenticity by Lionel Trilling (1972): "To praise a work of literature by calling it sincere is now, at best, a way of saying that although it need be given no aesthetic or intellectual admiration..." and the sequence of France's and Sophie moves on to another interaction, part of a series that establishes a) their sisterly closeness--Frances compares them to a lesbian couple that no longer has sex--and b) their lack, of a sort, of real maturity. That line from Trilling continues: "it was at least conceived in innocent of heart." And, I think, sincerely, that the choice of this quotation by Baumbach was deliberate.

See, in context (of Trilling, not the film, though I'll get to that), Trilling has gone over the origin (latin sincerus meaning "clean, or sound, or pure" and really meaning that whatever is being modified has "not been tampered with." He has covered a sort of history of the words use and at the point Frances quotes, he is in the middle of describing how the use of "sincerely" has become quaint or ironic; "'I sincerely believe' has less weight than 'I believe,'" he suggests; and "in the subscription of a letter, 'Yours sincerely,' means virtually the opposite of 'Yours.'" Then, he comes to the line Frances quotes:

To praise a work of literature by calling it sincere is now at best a way of saying that although the it need be given no aesthetic or intellectual admiration, it was at least conceived in innocent of heart.

And, I wonder if Baumbach is not responding perhaps to critics' opinions about The Squid and the Whale or Kicking and Screaming or Greenberg

(but, not Madagascar 3: Europe's Most Wanted, which I just learned Baumbach wrote, and that is such a confusingly interesting fact right now)

or any of the films he made with Wes Anderson. Almost like a backhanded reaction. Call my film sincere, will ya? And I imagine Baumbach putting up his fists like an old timey boxer. 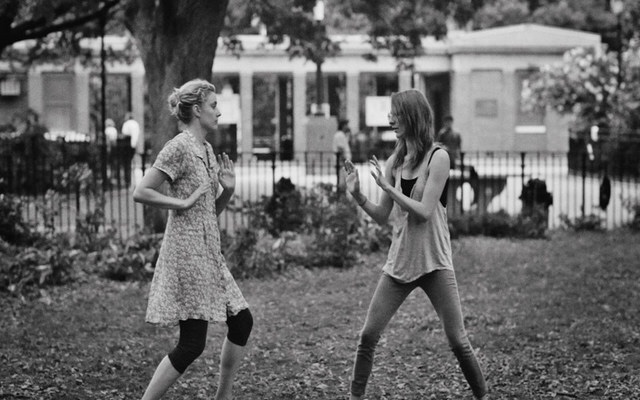 Except, this film is (or seems) sincere. Like actually sincere. Like we're peeking at scenes of a real life--perhaps moments from Gerwig's own life, since she cowrote this one with Baumbach. But, it also feels--and I am butchering Trilling's line here by dealing with it in this way--innocent of heart. Like the film is not trying to manipulate us. It is just there, letting us spy on its characters if we like, or move on to some other, bigger film instead if we like. David Fishkind at HTML Giant laments, "Frances Ha comes so close to being a movie I needed, my generation needed, this world needed." But, I think he's looking for something he had no real right to expect. He continues:

The time has never been riper than to cut down any encouragement among our youth to pursue a creative lifestyle. Almost everyone I know is failing, or will fail, at least in their eyes (!), due to the climate of cultural edification, pandering and self-serving inanity brought about by severely deluded and optimistic interpretations of parents' kind-hearted, but clearly seeped in motivation-not-reality, ethics, confused teachers, then professors--

And, I'm going to cut him off there. Partly because, hey, I'm a professor, fuck you Fishkind, but also because I don't go in for the message he's suggesting. Just look my entry (one of them anyway) about Dead Poets Society... I quote a review by Kevin JH Dettmar from The Atlantic, a guy who starts by expressing his hatred of the film, and I get into it, because, "we take things personally when they are our things." I think Frances Ha is another of my things. I spent much of my teens and twenties like the people in this movie. (Or like the folks in Rent, another film about young artists that I love... Or rather, I love the stage musical, and reluctantly put up with more than enjoy the film adaptation.) And, these people are not that far Dead Poets Society. I wrote in that old entry, in response to Dettmar's description of Keating's method for his students to interact with poetry as not "literary criticism, or analysis, or even study. In fact it's not even good, careful reading. Rather it's the literary equivalent of fandom. Worse, it's anti-intellectual.":

These are not literary majors. These are high school students. These are boys who can be convinced overnight that they know what they want to do with their lives. Boys who still jump on their beds when excited. Boys. There is room for criticism and analysis, but hormonal boys don't need that sort of depth; they need inspiration, so they can find something worth analyzing later. When Keating calls out Todd (Ethan Hawke) for thinking everything inside him is worthless, and he gets him to speak, that is a lesson worth teaching.

Frances and Sophie fight each other in the park like little kids. Benji and Lev leap onto Frances' bed to wake her up. These are not, in the usual sense, adults, but rather grown ups. If you can understand the distinction. Like, take this for example: recently in an interview on YouTube, Marisha Ray, who plays Dungeons & Dragons on Critical Role for an audience of tens of thousands every week, says, "...the World--and I think tis' really unfortunate... Society one day tells you that you have to grow up and be mature and act like adults and stop pretending, stop this make-believe shit, and, like why? Why do we do that to people? It's so sad." "Finding D&D later in life," she says later, "oh, adults can play pretend too." And, I think Fishkind needs to pretend more, to play more, to dream more. (And, so does Dettmar.) Maybe it's just me being my usual bleeding heart liberal, wannabe artist cum public speaking instructor. But, seriously, if more of us dreamed, maybe we'd manage to be nicer to one another. Maybe we'd manage to save refugees and raise up minorities and women. Maybe we would be happier.

And, I'm glad that Frances Ha doesn't preach this sort of thing at us. It just plays out, and we watch (or we don't). Like anyone's life, on display whether we take the time to pay attention or not. And, we need to pay attention. We need to watch more movies, watch more lives, listen and learn and love and get along a whole lot better than we do right now.