The plot of Working Girl is nothing that special. But, as with Wonder Woman, that is not the point. Or was not the point when this film came out in 1988. I was only 12, almost 13, when I saw this movie, plus, well, I was a boy. So, I was not really invested in Tess' upward trajectory as a woman. But, for one example (and my go-to reviewer), Roger Ebert said of the film:

The plot of "Working Girl" is put together like clockwork. It carries you along while you're watching it, but reconstruct it later and you'll see the craftsmanship. Kevin Wade's screenplay is sort of underhanded in the way it diverts yes with laughs, and with a melodramatic subplot involving [Melanie] Griffith's former boyfriend, while all the time it's winding up for the suspenseful climax.

Thing is, I don't find the climax to be all that suspenseful. It seems rather predictable to me. To earn, say, a more tragic ending--a failure--for Tess, the entire film would have had to play differently. And, Roger doesn't specifically reference feminism, though he does write about Tess' "serious hair" and "working your way up the ladder of life" and whether or not Tess will be taken seriously. He compares the film to Nichols previous film, The Graduate which is certainly complimentary, but it also suggests a certain lack of... novelty? I mean, for me, I think of The Secret of My Succe$s just the year before, another story about someone rising in business through lying. There it's Michael J Fox of course, young white male, should be obvious fit for business. Melanie Griffith with her big 80s hair--not so obvious a fit.

(I also think of the 90s television show The Pretender because there's a Catherine Parker there, but I think that's just a coincidence.)

Taking a different tack--but in retrospect rather than another contemporary review--Rosemary Counter at Jezebel puts the film entirely in context of feminism and the role and understanding of the role of women at the time. She writes:

The year was 1988. Margaret Thatcher became the longest-serving Prime Minister of the century, Canada struck down its anti-abortion laws and Joan Jett topped the Billboard charts. Women's full-time employment has skyrocketed to 52%, university grads were increasingly female, and the wage gap was quickly like closing. Meanwhile, I was an impressionable 5-year-old, at home renting and re-renting Working Girl.

Her life, the film, feminism, in one ball of context. But Counter quotes Susan Faludi's book Backlash because Faludi argues, "Tess is an 'aspiring secretary with a child's voice' who 'buries her intelligence under a baby-doll exterior.' Films like this one, [Faludi] said, represent a 'backlash era' to counteract female gain." In a New York Times review back in '88, Janet Maslin suggests, "One of the many things that mark 'Working Girl' as an 80's creation is its way of regarding business and sex as almost interchangeable pursuits and suggesting that life's greatest happiness can be achieved by combining the two." Interestingly, in context of the story, Tess actually doesn't go for this approach--combining the two. Jack asks her if she's free for sinner (and this is after she knows who he is), she tells him, "I don't think that we should get involved that way." She may have slept (literally) with him the night they met, but she didn't know who he was then. He was just some guy, and she had just learned that her boss had stolen from her and her boyfriend was cheating on her. Plus, most importantly, she didn't really go home with Jack on purpose. She just wasn't awake enough to do otherwise. As she tells her friend Cyn (Joan Cusack), "We're doing a deal together; that's all." And she means it. In fact, it's maybe the film's greatest asset as a feminist film that Tess doesn't really pursue Jack romantically. He talks his way into crashing Trask's daughter's wedding (tough Jack doesn't initially realize that's what she's going to do. 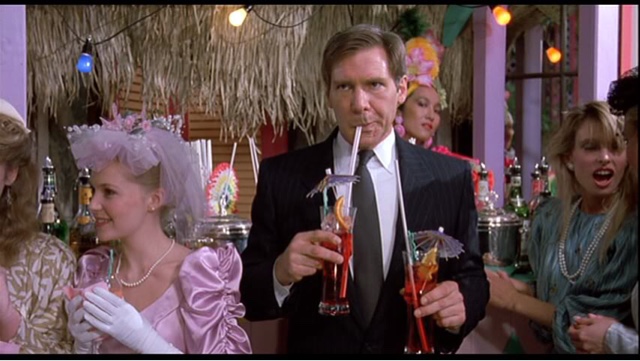 The film almost frames Jack as the "woman" in the relationship. She may need him to get her foot in the door, but it is Jack who is enamored with her, Jack who is a little awkward. JAck who doesn't know what's really going on.

They do go to bed together eventually, because hey, this is Hollywood. Then, right when Tess is going to confess her sins, Katharine calls and Jack's sins, so to speak, come out instead. They exchange I love yous later and it feels more like Hollywood ticking off a box rather than an organic piece of the film.