This entry should actually be short, partly because it has been a long day and I've got an early day tomorrow, and partly because I'm only watching a short film tonight. Aria by Pjotr Sapegin, a painful, beautiful little film that is all of ten minutes long. 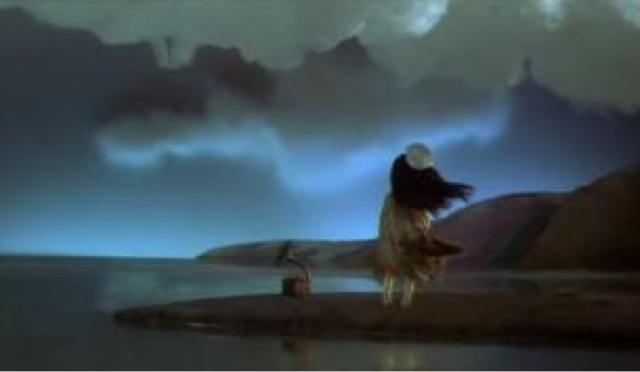 Today, as I arrived at Meltdown Comics in Hollywood to play Dungeons and Dragons, as I do every Sunday lately, I had to drive a different route than usual because of the Pride (and #Resist and #Equality) Parade. Friends of mine were out there marching. On a different day, I might have been out there. I marched on Inauguration Day, I marched the day after in the Women's March. And, I feel like I should be out there more, should be supporting those who need support, reinforcing those who need reinforcement, and renouncing those who need renouncing. On more than the Internet, I mean. Then again, as Ben Platt just said when he won for lead actor in a musical for Dear Evan Hansen, "don't waste any time trying to be like anybody but yourself because the things that makes you strange are the things that make you powerful." Those people out marching today, they have power because they claim it. I wish they had more.

Knowing I just needed a short film tonight, because I barely slept last night and am about to start a very busy five weeks, I picked Aria not because it's feminist, but because it's quite the opposite. What makes it tragic--and, though its details are simple, I won't get into them because you've got ten minutes, and the film is available to watch online--so go watch it... What makes it tragic is that it offers up a portrait of a women introduced together with a man, built as a character through a sex scene and moments of patience, of floating, of, eventually, being incomplete because Mother Culture has taught her that she needs a man, that she's incomplete on her own, and when there is no man, she must, in this case, be literally incomplete, even if she must dismantle herself. Destroy herself. Be no longer in the world because what use is a lonely woman?

And the implicit violence in the ending of this film is haunting, disturbing.

(Today's title translates roughly as "I do not meet him." There is no dialogue in this film, just "Un bel di vedremo" from Madame Butterfly playing over the action.)