he would never want me to see anything 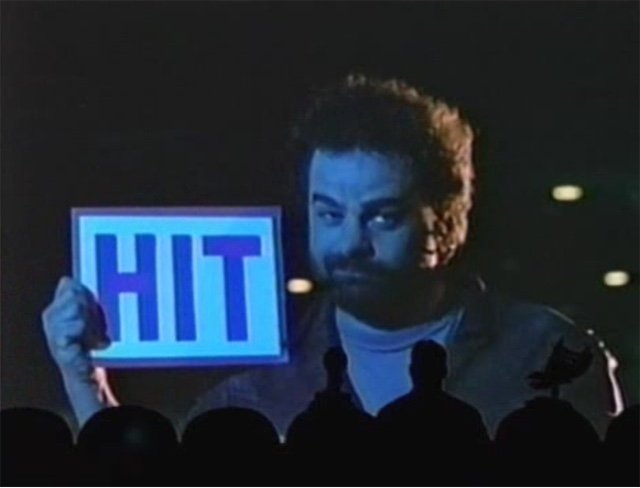 It's actually amusing when the silhouettes aren't talking, like the movie writes its own jokes, because, well, it does.

I was hoping the MST3K jokes might make the slow parts less slow. It's not really working. Mr. McCreedy showing Kevin around is still boring.

And Kevin's relationship with Amy is still really strained. I'm pretty sure she hates him and wants him to be a misogynist asshole. He's a horny 80s movie guy, though he is hesitant to admit it, and he really wants to be that misogynist asshole. If only the hobgoblins had gotten near both of them at the same time, they might have had a more interesting relationship... and sex. Seriously, they apparently live together, but she is more interested in Nick, more interested in Roadrash, And calls Kevin pathetic after the guy with military training beats him in a stick fight. (Plus, Kevin isn't actually much of a catch.)

Nick still makes a single move over and over in his fight with Kevin. Extra jokes can't fix that.

Best MST3K line so far: Crow asking, "Can we make it a rule that, in the future, films have to be made by filmmakers?"

Either MST3K or whoever put this episode online (I'm guessing the latter, because there's a bit outside the viewing with Crow answering a phone call about interspecies attraction) cut out Kyle's first phone sex with Fantazia.

Weird detail: earlier Nick casually threw his sunglasses onto the lawn after being greeting by Daphne. When Daphne wrestles with the hobgoblin on the lawn, she suddenly has sunglasses on. I guess she found them during the fight.

It's always good in later viewings of a film to notice new things. I also just noticed that Fantazia (the second phone sex call is in this video) has a blown up Monopoly property card on her wall.

Also, Kevin is blind. He asks Amy, Nick and Daphne where Kyle is--the three of them are sitting, exhausted on the couch--but doesn't notice the open front door, and Kyle and Fantazia talking on the porch, even though that open door is a few feet behind him.

The movie, like any bad movie, is actually more entertaining the more familiar with it I become. but, it's still not good. The concept is okay, but the execution is just... not.