it's so lifelike and realistic

Let's be clear. Yesterday was full of contradictions. Watch bad movies. Don't watch bad movies. Associate only with those like you. Associate with those different from you. Or everything and anything in between. Just, whatever you do, try if you can to make the world better by doing it. Laugh at whatever makes you laugh. Laugh loudly. Cry at whatever makes you sad. Wail if you must. Rage at the politics (or movies) that disturb you. And lament for failure, in whatever form. Put some thought into what you do and do what makes you happy (barring anything that hurts anyone else). Rant and rave and contradict yourself. It's fun.

But, enough about yesterday. Tonight I watched Howard the Duck. I'm not sure if I had watched the whole thing since I saw it in the theater in 1986, when I was 10. I'm sure I had seen parts of it now and then on cable. But, mostly, I had forgotten what supposedly made it so bad. The thing is, it's not that bad. In fact, for 1986, for a family-friendly science-fiction-lite film, it's pretty good. It's got great effects for the time--between the practical effects of Howard's face and the special effects of the Dark Overlord, it's actually got some great visuals. 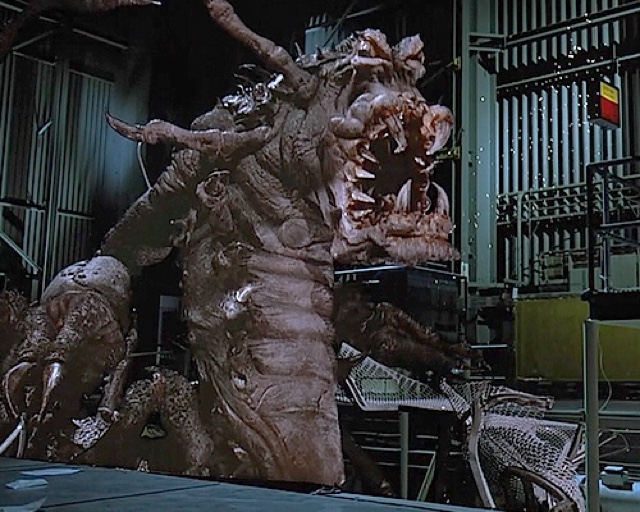 There are really only a couple obvious flaws. (The caveat being for 1986.) First, the transition into the third-act weirdness with the Dark Overlord is not very smooth. It's like the earlier portion of the film is one movie and everything after they use the laser the second time is another... Well, except for some of the goofiness of that Ultra Light chase (that doesn't last nearly as long as one reviewer on IMDb suggests), which is tonally befitting the earlier portion of the film. The entire sequence in the diner is actually pretty damn good, and the Dark Overlord is a strangely great combination of believable menace and ridiculous one-liner humor. And, once the Dark Overlord is out of Jennings' body, that creature is actually pretty scary and not just for 1986.

The film starts with a cold open that sets up the premise, with little need for any depth of science fiction. Howard could be a foreigner from another country instead of another planet and a lot of the first act would be the same. His interactions with Beverly wouldn't change much. His stranger-in-a-strange-land vibe would be the same. The implication of sex between Howard and Beverly might have made fewer people cringe. But, at that point in this "family-friendly" film, we've already seen breasts on two female ducks, so it's already headed into some weird adult territory...

Which brings me to the second obvious flaw. Like Troll 2, Howard the Duck is trying to be a couple different films at the same time. George Lucas set out to produce an adaptation of Steve Gerber's comic, but somewhere in that adaptation process, they lost nearly all of the satire--

(One could argue that there is still a bit of satire regarding relationships and especially the notion that opposites attract. Additionally, some of the ways they deal with people reacting to Howard, and specifically how the folks in the diner react to Beverly calling him her boyfriend, there is room for a discussion of satire about miscegenation, about race. Except, the film isn't trying to be about that. Not deliberately. It's aiming for comedy. Romantic comedy in the first act, something... else in the second, and some strange science-fiction horror comedy in the third. Of course, comedy, like science fiction, is often the best place to look for commentary on life, commentary on social issues, commentary on politics. The biggest problem that some people might have with the movie version of Howard the Duck is that it doesn't have the biting satire of the comic from the 70s. I mean, in '76, Howard ran for president, and like Jay Billington Bulworth would a couple decades later on the big screen, Howard told it like is instead of bullshitting the masses, and there were lobbies and assassins after him, to corrupt him or kill him so he would never be president. And, that's mostly in a single issue (#8 with a little rollover into #9). 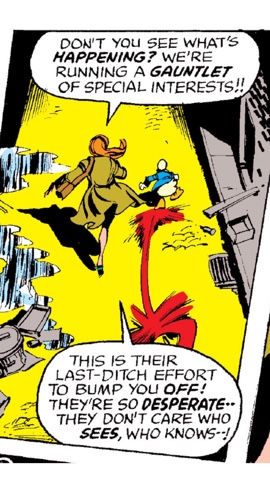 It doesn't have the same darkness as the comic either. The first issue of Howard's book (he'd been introduced elsewhere but got his own solo book pretty quickly) has Howard contemplating suicide because life is too hard being a Duck on Earth. The film would never go there. It's not that kind of movie, honey. Instead, it has an alien in Howard that might creep some people out and an alien in the Dark Lord that might frighten the crap out of some of the kids who dragged their parents to this thing. I remembered the Dark Lord more than I remember Howard from when I saw this movie as a kid. That thing was awesome. But, you must remember, I grew up on horror films and the like, so my standards are a little wonky.)

--and they twisted the charming bitterness of Howard into something more resembling a sitcom character... Almost as if Howard is the comic relief in his own film some of the time. But, worse, they kept some of the adult content of the comic but then aimed their adaptation sights on an audience full of kids. And, it makes for a weird combination. Not just the duck breasts, or the implication the Beverly and Howard have sex, but also Howard's job at... Is it a brothel? At one point, he gets thrown into a hot tub where two people are so, in the parlance of the mid-80s going at it hot and heavy so much that they don't notice the dwarf-sized duck in the water with them. Before the implicit sex between Howard and Beverly, by the way, the film makes sure to have Beverly in skimpy clothing as well. It's almost like there were three scripts: 1) a satirical romantic comedy, 2) a Porky's level sex romp with some bestiality at its center, and 3) a science fiction horror film. (That last one isn't too far off, as far as content goes, with the comic, either (though it might be tonally wrong); that first issue where Howard is contemplating suicide, he climbs up a tower made of credit cards, to jump to his death, and ends up battling an evil wizard and saving the life of Beverly. The film instead puts her in danger from street thugs, dialing back that weirdness.

(Side note: the impulse to violence from the diner folk, and the police, and the scientists; and the presence of the street thugs, suggests an interesting mid-80s vibe that some might not recognize. Recall the thugs on the subway in Adventures in Babysitting the year after this film, and we were up to the third Death Wish by 1986. Movies from the 80s were still relying on the idea that the streets were dangerous, that random strangers might mug you at any moment. (Regardless of the reality. And keep in mind, this movie is set in Cleveland, not New York or Chicago.) Additionally, the diner folk tying Howard down with the explicit intent to kill him--in a less fragmented film, might have had echoes of lynching or at least some more tension like a thriller. I can't help but be reminded of the diner in Superman II six years before, and another Hollywood trope to go with the random street thugs: alpha male (and possibly racist) diner guests who will quite easily start a fight.)

So, someone had the sense to not take the sexual stuff to explicit levels (except for those duck breasts, of course). So script #2 got dialed back a lot. But, you get the skimpy outfit Beverly wears to bed, you get Howard's job. The romantic comedy stuff is mostly left to the surface, so script #1 is also mostly missing, but it keeps rearing its head. In the end, it's that hypothetical script #3 that takes over. Except, then it's like two different writers started writing that film from different ends of the story--one at the beginning thinking this was something more akin to Short Circuit or E.T. (if Elliott and E.T. had not only some serious sexual tension but some actual sex... And that might be the weirdest thing I've described in this blog to date) (And, yes, I realize E.T. is not a comedy. My other immediate example was going to be Starman and that' seven less a comedy than E.T.. Maybe I should have gone with *Batteries Not Included.) than, well, Aliens, also out in 1986; and the other writer working backward from an ending with massive scorpioid aliens battling Howard and Phil for the life of Beverly. And, in the middle their scripts met, and drifted past one another just enough that we get alien breast at one end of the film and that song "Howard the Duck" at the other. Like an absurdist burrito of film, layering different scripts on top of one another instead of rewriting any of them.

Howard the Duck is not a bad movie. It's a bad adaptation, and it's fragments, and it's dated. But, it's actually quite pleasant.