Seriously though, while there may be enough moments to suggest that Troll 2 is a giant metaphor for Joshua's burgeoning sexuality, really the metaphor is far more obvious--this is Rosella Drudi and Claudio Fragasso (writer and director, respectively (and also husband and wife), though there is one name--Drake Floyd--credited with both) warning us that the Cold War is not really over. The wall wasn't down yet--that would happen from mid 1990 into 1992--and production happened before the official opening of the wall, November 1989. But, the signs were there. The Cold War was coming to an end, the Soviet Union was collapsing, and all those zombie movies screaming at us about communism (and/or consumerism) were going to have no good metaphors anymore.

Troll 2 is Hollywood itself--even if the film was made by Italian-speaking outsiders using local "talent" from Utah on screen--crying out a warning in two parts: 1) even without communism, Russia will remain, it will haunt us, it will come back to bite us in the ass, perhaps by influencing an election many years in the future (Trump's hair actually matches a few of the goblins, come to think of it), and 2) how will we make any more zombie movies if we don't have the Cold War, the spread of communism or racial equality or gender equality, or alternatively the spread of consumerism, and we've solved all the world's ills? Of course, there's also the more explicit #3, as Drudi has specifically said (quoted in the documentary Best Worst Movie), "Some of my friends had recently become vegetarians... and this pissed me off." In this, the film is a prescient warning about life today with social media and our increasingly politically divided echo chambers lashing out at one another as if every choice each side makes is absolutely evil.

A nice textbook American family--taking Grandpa Seth's ghost as the extra half kid in the proverbial 2.5 kids--heading off to be farmers for a month just as capitalist America had defeated socialist Russia. They're pushing away the trappings of liberal America and heading for conservative America, where they wear baseball caps and cowboy hats, where they go to church, where they grow their own food and they're "hospitable, especially to strangers". The Presents are replaced by the Waits in the town of Nilbog, and it's not just that town name that matters. The reality of the Cold War is being left behind. The reality in which America puts up with all the liberal bullshit spreading since the 1960s is being left behind, or so the conservative message of the film suggests...

Or is it the opposite? Consider: Fitting in with the conservative country folk is the horrific result of giving in to pressure. Perhaps this film is celebrating the liberal side of things. Joshua appreciates a good story. He doesn't just exercise and dress up in trendy 80s clothes like his sister. He doesn't conform to heteronormative conservative ideals like his mother the housewife, or his father the businessman (?). He quite literally pisses on traditions like hospitality. He resists the urge to conform within his family and within the town of Nilbog. He doesn't have much direct interaction with Creedence (and how about that name?) but he does interact with the (apparently unnamed) minister a few times.

Outside of Joshua, consider the various boys who come with Elliott to Nilbog. Arnold chases after and tackles to the ground a strange girl. He goes with her to a church of all places, and for what, if not sex? This is an 80s film and they're two teenagers wandering off alone, after all. There, she is transformed by the experience and eaten. Back to the sex metaphors, I guess. And he is also transformed, and there is (a) pot involved. They both end up dead. Drew, seeing there is no food in the RV, runs into town--but not before complaining to Brent and Elliott who are in bed together--and sure it's a police car that offers him a ride, but getting into a car on the side of the road? If that ain't some hippie liberal practice, I don't know what is. Brent is seduced by a woman he doesn't know and invites her into the RV, and she drowns him in popcorn, because the mixed metaphor of slasher-film-conservatism and movie-audience-consumerism needed to be played out more explicitly. Their hedonistic TV trip into the country ends with a lot of death (just like any slasher film might). 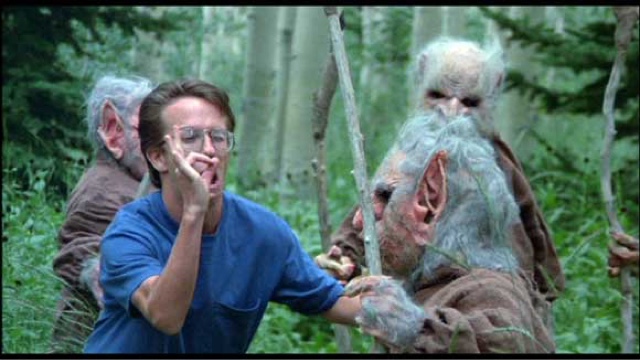 Caption: All that's missing is the joint in his hand.

But, let us come back to the vegetarian thing, specifically. Explicitly, this film is about vegetarian goblins trying to turn a nice, wholesome American family away from eating meat. Joshua consumes bologna to "defeat" them. It's a bit of a mixed bag in terms of its politics. It plays the mindless communism of the goblins as the horror, but lets the sexually active Elliott and Holly escape. It latches onto tradition with Grandpa Seth and his storytelling, but almost exclusively rejects the conservatism of farming by embodying it in the murderous town of Nilbog. It puts the explicitly pagan Creedence into an old chapel, but has the more obvious minister preach in what seems to be an old warehouse. But, imagine that sermon as something literal, giving all those preachy vegan types a place to hang out together that isn't Whole Foods. And imagine if all the vegetarians were marked, as those in Nilbog are, with moles shaped like clover leaves. Echoes of both the biblical Mark of the Beast and some holocaustal armbands, marking those who are different so they might be sacrificed.

What you eventually get in Troll 2, with its strained, and mixed, metaphors, is a film celebrating the Waits family for their urge to consumerism, their urge to carnivorism, but also their independence from religion... At least, the latter fits with the minister. But, while he visibly resembles a religious leader, it is Creedence who more explicitly represents religion--paganism. So, the vegetarianism that so pissed off Rosella Drudi goes hand in hand with paganism and the vegetarian indoctrination party that ends act two is the greatest of horrors. Except, farming, living off the land, can represent both the hippie Left and the Middle America Right. And, the conservative, down home churchy visuals stand out more than Creedence's Druid-ness. Had the filmmakers settled on a more consistent set of visuals, the message might be more clear. But, what is clear is that Troll 2 is about the battle between Right and Left; between urban materialism and rural idealism; between Christianity and paganism; between carnivorism and vegetarianism; between hedonism and good proper, wholesome living. And maybe the Waits winning (for the most part) is a warning. Or maybe the reappearance of the goblins afterward is the warning. It's hard to be sure. And that, really, is the only flaw in Troll 2.

Also the bad acting, the bad script, and the nonsensical premise. But, that's a given.