would you settle for the point...

[(Note: This was mostly written a few hours ago, but I forgot to take my keyboard with me today. I hand wrote some stray thoughts then a few rants bits... You'll see.) 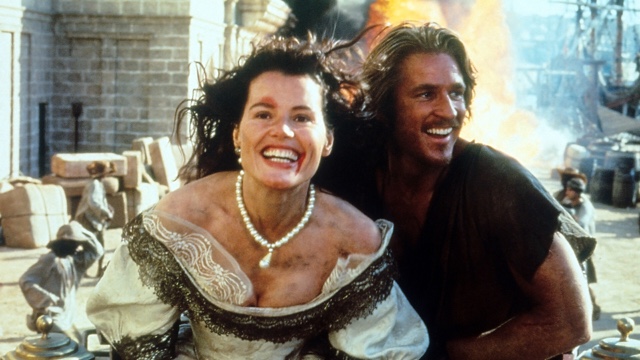 My first thought while watching Cutthroat Island was to wonder when it came out. I remembered (accurately, it turned out) it coming out in the mid-90s but it has Mario Kassar listed as producer. My first note: Mario Kassar? - the 80s guy? Sure enough, it' she 80s guy, which explains some of what's going on with this movie. 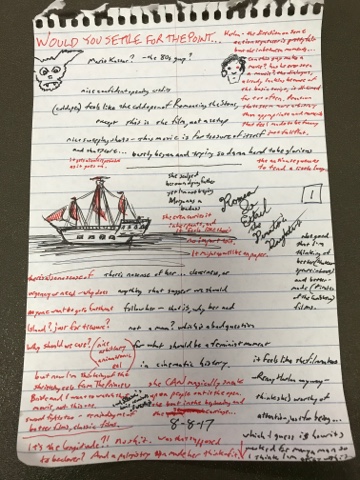 That's page one. Black then red on this page. The others are more organized. I will try to just type them as is, keep it simple, and save me some time.]

Nice confident opening credits. Cold open feels like the cold open of Romancing the Stone, except this is the film, not a setup. Nice sweeping shots--this movie is far too sure of itself. And that score... [later added in red: It gets a little repetitive as it goes on.] Barely begun and trying so damn hard to be glorious.

She scalped her own dying father yet I'm not buying Morgan (Geena Davis) as a badass. [Later added in red: She even carries it in her pants and it feels like there's no import to it. It might as well be on paper.] [Not in my notes, just me adding on now: Seriously, having part of the map hidden on some guy's scalp, only to find it after shaving his head when he dies is an awesome detail... for later in some other, better movie. This early, it's just so arbitrary--strange of sake of being strange. But, imagine this kind of thing as a third act revelation when people have been searching for two acts for that map piece. That would be amazing. But, this isn't that.]

[Then, I've got this in my notes, in cursive, like a title:] Romeo & Ethel the Pirate's Daughter. [And, if you don't get the reference] Not good that I'm thinking of better (Shakespeare in Love) and better-made (Pirates of the Caribbean) films.

There's no sense of her... cleverness, or anything that suggests we should follow her--that is, why her and not a man? Which is a bad question for what should be a feminist moment in cinematic history. It feels like the filmmakers--Renny Harlin anyway--think she's worthy of attention just for being... Which I guess is how it's worked for many a man so I think I'm okay with it.

[Speaking of Harlin], the direction of some action sequences is pretty fair but the in-between moments... Can this guy make a movie? Has he ever seen a movie? The dialogue, already lacking because of the basic script, is ill-timed far too often. Reaction shots seem more arbitrary than appropriate and moments that feel made to be funny just fall flat. The action sequence do tend a little long.

There's no sense of urgency or need--why does anyone want to get to Cutthroat Island? Just for treasure? Why should we care? (Nice arbitrary animatronic eel) but now I'm thinking of the shrieking eels from The Princess Bride and I want to watch that movie, not this one. (And Shaw's (Matthew Modine) hair reminds me of Westley's.) Sword fights too--reminding me of better films, classic films.

She can magically sneak up on people out in the open. First the boat in the beginning and now the carriage.

It's the longitude?! No shit. Was that supposed to be clever? And a palmistry sign made her think of it. [And I went to page two for a rant.] 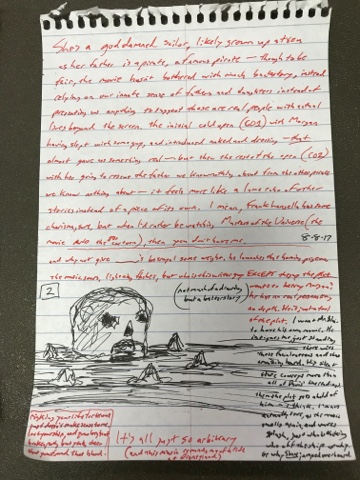 She's a goddamned sailor, likely grown up at sea as her father was a pirate, a famous pirate--though to be fair, the movie hasn't bothered with much backstory, instead relying on our innate sense of fathers and daughters instead of presenting us anything to suggest these are real people with actual lives beyond the screen. The initial cold open with Morgan having slept with some guy, and introduced naked and dressing--that almost gave us something real--but then the rest of the open with her going to recuse her father we know nothing about from the other pirates we know nothing about--it feels more like a lame echo of other stories instead of a piece of its own. I mean, Frank Langella has some charisma, sure, but when I'd rather be watching Masters of the Universe (the movie [in which Langella starred as Skeletor] or the 80s cartoon), then you don't have me.

And, why not give John's [and I had to look up that character's name] (Maury Chaykin) betrayal some weight? He launches that homing pigeon, the music soars, lightning flashes, but who is this writer guy except the guy the PLOT wants to betray Morgan? He has no real personality, no depth. He is just a tool of the plot.

I want Mr. Blair (Rex Linn) to have his own movie. He intrigues me, just standing there with his facial tattoos and that amazing beard. His silent stare conveys more than all of [Geena] Davis' line readings. Then the PLOT gets ahold of him... I think. I'm not actually sure, as the music swells agin, and waves splash, just who is kicking who off the ship, or why, or why Shaw jumped overboard.

It's all just so arbitrary (and this music reminds me of a ride at Disneyland).

[There's also this side note in a little box:] Risking your life for treasure just doesn't make sense to me. Lost your ship, and your long boat broke apart, but yeah, cheer that you found that island. 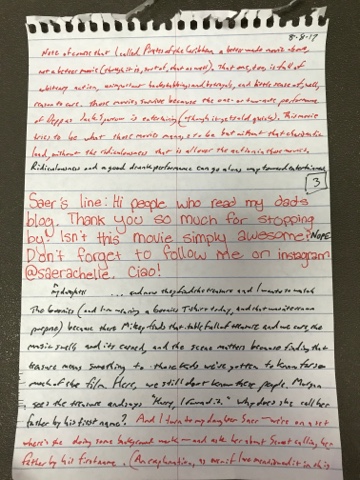 Note of course that I called Pirates of the Caribbean a better-made move above, not a better movie (though it is, sort of, that as well). That one, too, is full of arbitrary action, unimportant backstabbings and betrayals, and little sense of, well, reason to care. Those movies survive because the one- or two-note performance of [Johnny] Depp as Jack Sparrow is entertaining (though it gets old quick). This movie tries to be what those movies manage to be, but without that charismatic lead, without the ridiculousness that is all over the action in those movies. Ridiculousness and a good drunk performance can go along way toward entertaining.

[Then my daughter Saer asked if she could add a line.] Saer's line: Hi people who read my dad's blog. Thank you so much for stopping by! Isn't this movie simply awesome? [To which I added: Nope] Don't forget to follow me on Instagram @saerachelle. Ciao!

[Then, back to me.] And now they find the treasure and I want to watch The Goonies (and I'm wearing a Goonies t-shirt today, and that wasn't even on purpose) because there Mikey finds that table full of treasure and we care, the music swells [or does it get quiet?] and it's earned, and the scene matters because finding that treasure means something to those kids we've gotten to know for so much of the film. Here, we still don't know these people. Morgan sees the treasure and says, "Henry, I found it." Why does she call her father by his first name? And I turn to my daughter--we're on a set where she's doing some background work--and ask her about Scout calling her father by his first name. (An explanation, as even if I've mentioned it in this blog before, it's probably been a while: When she was in the 6th grade, Saer starred in a high school production of To Kill a Mockingbird.) She explains that it is--and I'm paraphrasing because I couldn't keep up with her--because Atticus is more than just her father, he's important to the city, the county, and Scout recognizes that fact. Plus, Scout thinks herself more mature than her age. But here (and this is me again; Saer's not watching the movie), Harry is far from important. He isn't a force in this world, unlike Atticus Finch. He's not even a McGuffin; his scalp is, or the treasure is. But, a search for a McGuffin, a fight over a McGuffin only matters if we care about character, if their stories rise above the action of the PLOT. This precursor to Pirates of the Caribbean never lets any character rise above the PLOT, and so we have no reason to care, or to try to understand why any of these people do what they do. And there's half an hour of the movie left and I have no interest in it. Just running on inertia now. And dreaming of better movies. Good movies.

[And, I spent the rest of the movie drawing and coloring a pirate flag.]

Colored all the way to "The End". 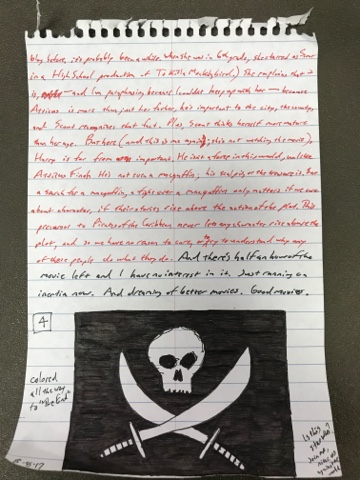