the door to the universe is you

Once upon a time there was a guy named Joe

Who had a very lousy job...

I worked office jobs in my 20s. The opening scene of Joe Versus the Volcano is amazing in its satire (and it's awesome that both Lloyd Bridges and Robert Stack (who played it relatively straight in Airplane! are in this), workers all dressed in black, trudged through a muddy parking lot, turnstile doors, a zig zag walkway, all to enter a factory that makes medical devices and leaks exhaust into the air. The lighting inside makes everyone look sickly, the hat rack doesn't even work right. It's no wonder that Joe Banks (Tom Hanks) feels like he's always sick. Effectively, he is. His job drains away his life. Or as he tells DeDe (Meg Ryan) (regarding his shoe), "I'm losing my sole." 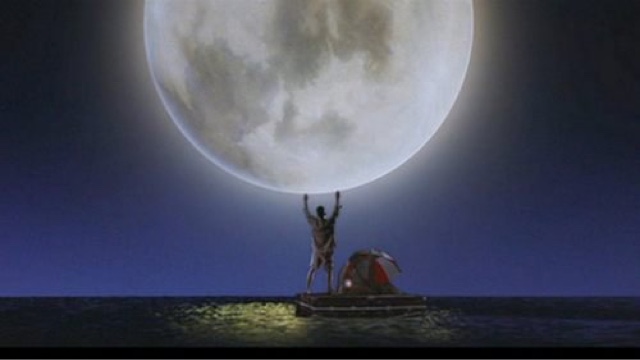 I like strange movies... Well, I like most movies. Some more than others, of course, but most any movie can be likable if you give it time. That's what I've been doing here this past month; watch the bad movie until I can figure out how to appreciate it. As I already appreciate Joe Versus the Volcano, I won't have to wait for it with this one. But, I'm also going to have to round off this month and what it means... Except I think I just did that. "[M]ost any movie can be likable if you give it time." That and this: most any movie deserves to be given a little time. Movies take time, movies take effort. And, if you're doing it right, watching movies should take some effort as well.

Ideally, as I see it, it should be like this: the filmmakers, the actors, the writers, the directors, the crew members who hold the booms and set up the lights and operate the cameras and everything else--they put a piece of themselves into the film, and you take it out, you mix it up with a piece of you, a piece of the person next to you in the theater, or on the couch at home, and somewhere it all gets twisted into something else entirely. The movie changes you, and you change it, and it's not as lifechanging as quitting your job and setting sail into the South Pacific, but it's something. A movie isn't just a movie.

Like this movie. Joe takes a little piece of DeDe and a little piece of Angelica (Meg Ryan) and a little piece of Patricia (Meg Ryan) and each interaction changes him (and changes them), makes him a more complete person... The irony of the film, of course, is that Joe's journey toward his suicide is what gets him living. And, that's not just a cinematic conceit, either. The decision to do something opens so much within a person. For example, girlfriend I lived with in Arkansas for a while, we were both damaged people, clinging to each other when we should have been trying to make our lives better. One of the best nights we had together was our last, before I finally left to return to California. Just knowing it was over alleviated the anxiety and stress of being there. Joe has left the doldrums of his life. "At the end of his tether, death seems like the only way out of the nightmare he perceives his life to be," Hannam (2008) writes about Phil Connors. Joe Banks has his own hypochondriacal Groundhog Day Effect going in the slow-paced nightmare of his life, working a job the saps that his will and his health so that while he works beside DeDe, he can't even ask her out until after he's quit. His brain cloud diagnosis, like Phil Connor's time loop, is not a bad turn in itself but a trigger into a good one. In the doldrums, Joe's life is awful, repetitive, draining, and incessant. Knowing it will cease, the lighting changes.

What you need is to clear your head.

Carry whatever baggage you have into the theater with you, but leave it there, let it go, add to it, transform it, erase it, expand it, embrace it and forget it at the same time.