watch it slowly drip away

And sometimes, I take the bad movie personally. Sometimes, it's not supposed to be a bad movie at all. Sometimes it's a sequel to one of my favorite films as a kid and I'm excited, and then increasingly disappointed as I watch the horrible followup. That followup: Highlander II: The Quickening. Roger Ebert's review begins with a lovely line about the awfulness of this film: "This movie has to be seen to be believed. On the other hand, maybe that's too high a price to pay." I have paid that price twice. I saw this movie in the theater. Second run theater, actually. Didn't see it opening weekend. I cannot remember if I knew ahead of time not to rush out to it, maybe some bad things said about it in Starlog magazine. Maybe I (or my parents, though I could drive by then) was just busy. I also rented the film on VHS once. 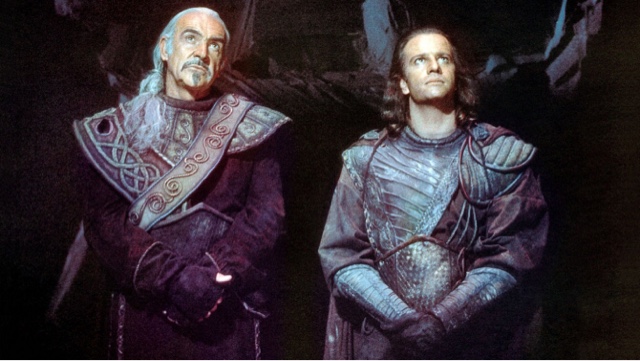 Imagine, if you will, my confusion, having loved the swordfighting and magic in the original Highlander, coming into this movie with its opening text:

Industrial pollution has destroyed the ozone layer, leaving the planet at the mercy of the sun's ultraviolet rays.

The ozone layer? An electromagnetic shield? Already, you're taking an awesome fantasy and twisting it into science fiction, and not just the costume of science fiction as with Star Wars.

(A bit of confusion: I swear I remember a shot of MacLeod (Christopher Lambert) in some bunker as they turned on the shield, and the Wikipedia entry for this film has two paragraphs of plot before we get to 2024. Am I not watching the theatrical cut? I mean, I know there's another version of the film--the Renegade Version--which removes Zeist from the story somehow; I've never actually seen that version. The existence of the original version pissed me off too much to ever bother. And the existence of the Highlander tv series satiated my love for the original, and even improved on the original in some ways. I looked it up just now and, oddly, think that I saw the UK version of the film, with the longer prologue. I'm not sure what that cut would have been doing at a second run theater in the US, but hey, 10 minutes less ridiculousness tonight.)

A small group believes that the ozone layer has repaired itself and that the shield is no longer necessary.

But no one knows for sure.

1) If this is science, fuck this small group's beliefs. Like climate change deniers. You know, fuck them. 2) No one knows for sure? We do still have scientists, yeah?

Sidenote: The big neon OPERA sign seems like a deliberate nod to the big SILVERCUP sign on the roof at the end of the original. But, all director Mulcahy is doing is reminding us of the better work he did six years before.

Now, back to my point. If we have scientists, if they didn't just all die off along with the ozone layer, then there are ways to check if there's an ozone layer.

But, nevermind that. I have to deal with Zeist. Like I had to deal with it as a teen seeing this movie on the big screen. It makes no sense. Now, a movie about aliens who come to Earth to fight each other--that's cool. That's lots of other cool movies. Hell, just the year before this movie came out, there was I Come in Peace starring Dolph Lundgren (as a J.C. character no less--were I watching that tonight, I could totally run through some Christ-Figuring), for example...

The punishment for the rebellion on Zeist doesn't make any sense either. Send these fighters away to battle one another so only the strongest (in theory) is still around, then they can choose to return to Zeist? Seriously, the long term plan is that the strongest rebel gets to come home. What's to stop him from rebelling again?

And, why did that security camera just zoom in? Will this film do anything that isn't ridiculous?

Even bigger is this: how did MacLeod make the shield? After all the scientists died, was he magically the smartest man on Earth? He may be old, but he ran an antiques shop. For that matter, why is this ozone thing even part of the story? The plot--if we accept the Zeist bullshit--is about a new arrival from Zeist coming to fight MacLeod again. The ozone stuff is a weird attempt to grab an audience that probably wouldn't be seeing this movie anyway. But, I'm not sure if this movie is the Highlander character shoved into a movie that was supposed to be a serious exploration of the consequences of ozone depletion or a cheap bit about ozone depletion shoved into a Highlander sequel.

These hoverboard-riding twins remind me in a weird way of the aliens from Battlefield Earth, a movie so horrible even I couldn't get through it all, but alas I cannot find it available online, not even to pay for, to watch it this month.

Also, why does one hoverboard alien also have wings that pop out of his backpack? How many ways to fly does he need?

And, why do they call him "highlander"? They should use his name. He was called "the highlander" because a) he was from the highlands of Scotland, which I'll get back to in a moment, and b) Duncan wouldn't exist in the Highlander mythos for another year or so.

But let us backtrack a little before this movie really goes off the rails and has Ramirez (Sean Connery) return... Too late. There is is, interrupting a stage performance of Hamlet because, I guess that's funny.

(Sidenote: MacLeod putting "A Kind of Magic" on the jukebox was offensive enough. But, playing an instrumental version of "Who Wants to Live Forever" as he and Louise (Virginia Madsen) go at in an alleyway? Fuck everyone involved in that decision. That song was a beautiful piece connected to Connor's long-term relationship with Heather; it's about the weight of love that ends in relation to immortality. For young me (10 years old when I saw the original, 16 and having seen that original a few more times by the time this sequel came out), that song was meaningful as fuck. Now, here they play it over some bullshit quickie between two people who just met, and it's like--

And I must interrupt because why is MacLeod describing the sky to Louise? Is she supposed to be younger than 25? Madsen was 30 when this movie came out.

--it's like this movie wants to ruin everything... No, that's the terminology of folks who hate remakes just because. It's not changing the original at all, so it can't ruin it. But, it is insulting it by shoving these songs into this context, but shoving MacLeod and Ramirez into this ridiculous story.)

The subway sequence is just stupid. If those numbers on the dash are mph, there should be a lot more destruction when that thing crashes. If they're anything else, they're meaningless.

(And, here's the bit with them activating the shield. Maybe this is the cut of the film I saw, and I just reordered the scenes in the version of the film that exists in the deep, dark recesses of my head.)

And now I must backtrack finally. Because, Connor MacLeod was born in Scotland. Ramirez was born in Egypt (his name wasn't Ramirez, of course). They were not just transported here like Katana (Michael Ironside) or the moron twins. Ramirez explained the Gathering to MacLeod back in Scotland before he (Ramriez) died. Connor and Kastagir talked about the Gathering as well. With no mention of Zeist, no mention of being aliens. Even if we assume that MacLeod and Ramirez and Kastagir just didn't remember who they were before (or if they were somehow inserted onto Earth as unborn infants), how do Katana and the Scientologist twins manage it differently?

Quick nitpick: you drop a body that far, with a noose around the neck, it is not going to stop so nicely. That head is going to be ripped off, the headless body is going to hit the ground. But, hey, if a subway train doesn't have to follow the laws of physics, neither should a human body.

Worse than the Zeist thing is the Zeist thing doesn't set up Katana well enough. Sure, his actions have shown he's a homicidal psychopath, but that' snot enough for a villain. The Kurgan in the original had some personality to him. He had charisma. And, his connection to MacLeod in that battle outside Glenfinnan was set up better (he helps another clan just to get to MacLeod, that shows drive and personality) than Ramirez' speech that starts the rebellion on Zeist. We never really get to know Katana. (Or why a name like Katana or MacLeod or Ramirez would work on Zeist.) David Blake (John C. McGinley) (the head of the Shield Coroporation) has more personality, even if he feels like a mustache-twirling villain and not someone realistic) and more of an obvious investment in the plot.

If Ramirez' magic could open the door, why did he even bother with the giant Bond-villain fan?

Interesting bit of trivia: Allan (Allan Rich) tells MacLeod to go to 33 degrees 26 minutes north latitude. (Ramirez later points out the obvious: they need a longitude.) Thing is, the Shield Control base seems to be near New York City. After escaping the facility, MacLeod and Louise don't seem to travel very far. (Or maybe they use the wormholes Jack Bauer always seemed to use on 24.) But, 33 degrees north runs across the southern half of the US. And 33°26' apparently runs right through where the flying saucer supposedly crashed outside Roswell, New Mexico. Maybe they were from Zeist.

And then the movie just ends. (The Wikipedia says MacLeod and Louise go to Zeist. I don't remember that. And this version doesn't have that.) Well, Connor kills Katana and steps into the Shield beam thingy and magics it away.