the descent into ishtar

Marco Rubio just referred to Trump's strategy for Afghanistan, laid out in great detail in an amazing speech this evening as "good" strategy and an "excellent" speech. Which would be fine except I was lying about the great detail and the speech being amazing. I mean, don't get me wrong, it was a TelePrompTer speech so it had complete sentences and it made relative sense, but it was half Trump mansplaining the existence of ISIS, telling the same tired story about how Obama pulled out of Afghanistan too early and that's why ISIS exists, and then being really vague about what he's going to do about it. More troops. More war. No end. Last week it was nuclear war with North Korea, not a land war in Asia, next he's going to go up against a Sicilian when death is on the line.

I kid because I'm tired and angry. This shit is distracting me from my movie tonight... Hell, it's making me want to draw direct comparisons. Hapless Americans pushing the Middle East (even though the film takes place in northwest Africa) to the brink of war because they don't even know that they know nothing about anything. Rogers and Clarke. Trump. Same difference. Same shit, different decade. Clarke says early in the film, "People would rather suffer with what they have than try the unknown." Profound and trite at the same time. So fucking true that it should be obvious, but most people don't pay enough attention to notice. If you've got the same shit going on, the same wars, the same movies (or remakes or reboots), and you've got the same job to go to every day, you can be comfortable in your Groundhog Day... It's Hannam's (2008) Groundhog Day Effect writ on a global scale, over the hearts and minds of so many people that the momentum is just too much to stop, too much to face, but also too much to ignore. But the guy who can't spell "heal" and stares at the sun directly during a solar eclipse has to leave his mark on the world beyond all the shitty hotels with his name in giant capital letters. Damn the Muslims, down the brown people and the black people and eventually any color but white... And a whole lot of the white folks too. Because, who can imagine our intelligence agencies acting any less inept than the various spies in Ishtar with Trump at the helm? And, the fastest way to unite a people is to imprison or kill everyone who disagrees with what you want the mainstream to be.

So, yeah, another sequel to all the wars so far in Afghanistan. Or is still the same fucking movie still playing after all these years? We'd like to think people learn from the past, that countries learn from the past, that monuments to confederate generals would be reminders of bad choices, not remnants of an ideology to celebrate and embrace... But there I drifted off the subject of Ishtar, of Afghanistan, of Trump and the wars and rumors of wars and all that bullshit that makes it far too easy for supposedly good Christian folk to ignore real problems in the world, urgent problems, because Jesus is going to show up soon and none of the starving people, or folks with poisoned water in their pipes, or cops gunning them down in the streets, or religious zealots cutting off their heads (yeah, I'll include that, too) just won't matter any more...

Ishtar and Donald Trump don't go together well. Brings up my leftist ire. Makes me want to rant and rant until there's nothing to rant about anymore.

It occurs to me that, had no one called Ishtar one of the worst movies ever made, I probably wouldn't like it as much as I do watching it these last three days. My expectations wouldn't have been so low, and it wouldn't have exceeded them so much.

(If Trump's lucky, he'll do the same, exceed my expectations, which should be easy enough; all he really has to do is construct actual sentences and not promote and defend white supremacy or threaten genocide. That's not much to ask, is it?)

Like, maybe it's not really that good, but I was expecting a piece of shit. Instead, I'm finding a slow starter that makes for some pointed satire about how America infects other countries with its misguided and misinformed efforts to affect change.

And Clarke just said another good one: "You never appreciate your own country until you leave it." And, it occurred to me, that line is a good paraphrase of a point I try to make about movies. It's not escapism. Not really. It's just being someone else, being in someone else's story for a little while, because that alters the way you see your own story, the way you see yourself. If you just watch the news that agrees with you, just read the reports that praise you, just watch the movies that fit snugly into your worldview, then nothing ever changes. You gotta get out of your comfort zone from time to time, gotta challenge yourself. Gotta read books, watch movies, listen to other people's stories and really hear them, see them, understand them, appreciate them. Not just interrupt to just fit them into the gaps in your story. 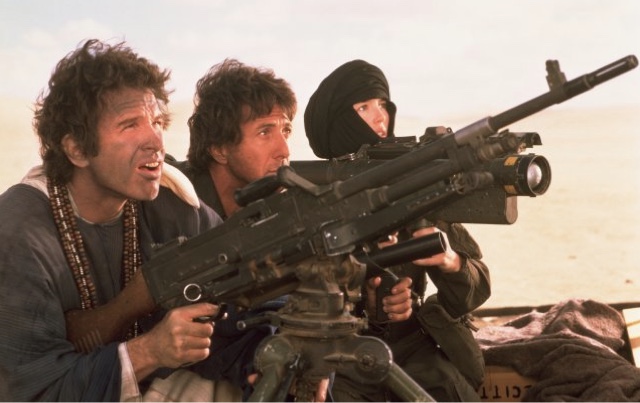 I'm a strange mix of emotions today, a strange mix of directions, a strange mix of politics and cinema, and I am tired. In a week, fall classes get going, and I spent today cutting some video clips for a new class. I've got syllabi to finalize, I'm away from home most nights this week, and lately I don't sleep very well...

Ishtar is an imaginary country in the Middle East (or at least Northern Africa). It's a place where political parties and religious factions are constantly on the brink of war. And suddenly I'm reminded of the America they sing about on the boat in An American Tail, some imaginary place where everything will be okay. Where your natural enemy is nowhere to be seen. Where the streets are made of cheese, and no one is wanting.

If only our politicians had a little more imagination, at least as much as a family of Russian mice, or Elaine May.

Instead, they've got none. And, we get the same wars, the same debates, and progress, when it happens, happens slowly, and is fought at every turn.