the ones that exist in our minds

In 7th grade--can't remember if it was fall semester or spring semester, but 7th grade was '87 to '88--I was rereading Joe Dever's Lone Wolf books. Particularly, I was reading The Caverns of Kalte (that's the second book) again during a lull in math class... I had probably already finished my math work--I was amazing at math, would get a couple years ahead by the end of high school. And the assistant teacher, whose name was Mr. Mentell or some spelling--we called him Mr. Mental--happened to look over my shoulder when I'm at an image of a big tentacled monster. 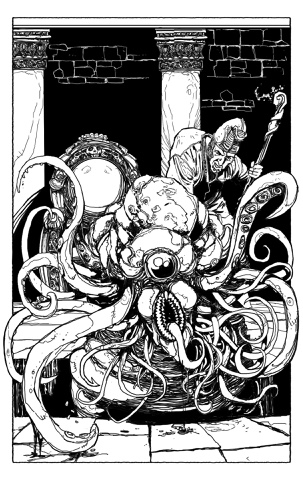 This one, I think.

He asks to see my book, and doesn't give it back after class. That night, we get a call. The next day, my mother is in the principal's office with me and the vice principal... And I can't remember if Mr. Mental was in the room. But, long story short--the religious private school that this atheist attended kindergarten through twelfth grade decided that those books (which, if you don't know, we're basically Choose Your Adventure books with a RPG twist, tracking stats and keeping track of supplies and that sort of thing) were devilry. That night, my mother would ask a bunch of questions about those books, I would avoid answering, I would cry a bit, and in the end, my collection of Lone Wolf books was in the trash, and I resented the shit out of Mr. Mental, the vice principal, my mother, my school, my church, and religion in general.

And they were late to the paranoia over RPGs anyway.

The novel Mazes and Monsters came out in 1981. This TV movie of the same aired at the end of 1982. June 9 1982--in between the publishing of the novel and the airing of the film, the Dungeons & Dragons panic had its big fomenting moment--Irving Lee "Bink" Pulling II (and I keep wondering if his character was called Bink or if that was just a nickname he had, but I haven't seen an explanation of the Bink) shot himself, June 9, 1982. His suicide note included "'unexplainable-type' phrases, apparently references to the game" according to one investigator (Zibart 1983). "Sheriff's deputies said the youth's room was filled with 'Dungeons and Dragons' paraphernalia" (ibid). It's rarely a positive reference when they use the word "paraphernalia". Supposedly, Bink's character had been cursed recently within the game. Robert A. Bracey III, the principal of Patrick Henry High School where Bink attended, was sued by Bink's parents. They had a Dungeons & Dragons game running as an "organized school activity" with a schoolteacher as the Dungeon Master. A far cry from my own school. At my school, we invented our own role playing games and played them after school sometimes. When not getting in trouble, of course. Bink's mother, Patricia Pulling, would become famous over this. She blamed the curse for her son's death. Well, that and the more general religious paranoia about the game leading young people to the devil and witchcraft. Patricia founded a group called BADD--"Bothered about Dungeons and Dragons"--in 1984. I can't find the original source for this, but the rationalwiki page on BADD says Patricia predicted 500 game-related suicides a year, while BADD actually documented about 7 a year. The CDC "found no causal link between D&D and suicide" (BBC 2014). Pulling would go on to be an "expert" witness in trials, for example the murder trial of Darren Lee Molitor in 1984.

Monsters and Mazes is more directly based off James Dallas Egbert III, who disappeared from his room at MSU in 1979. A private investigator linked his disappearance to D&D but "Egbert suffered from, among other things, depression and drug addiction, and had gone into hiding - in the utility tunnels under the university - during an episode of self-harm" (ibid). He would later shoot himself in 1980.

Interestingly, I write that as Kate talks to Daniel about Robbie's recent behavior. While the premise is silly because the film ignores this part of things, that we don't really see Robbie's behavior changing as much as we could is one of the only real flaws about the movie itself, as a TV movie. Instead we get Daniel going to explore the caverns (and Kate following) to try to cheat. Kate talks about Robbie blessing people; that's a visual that could be interesting. But, more importantly in context of what I'm talking about today, Kate notices Robbie's changing behavior and is concerned. She knows the game Mazes and Monsters, she knows it's not the evil thing some paranoid religious folks would think it is, so she sees Robbie's behavior for something else entirely--a mental breakdown.

But, on the note of suicide and depression and mental illness in relation to D&D, I think it's worth pointing out that it is the same youths (or adults) suffering from mental illness or other problems in their lives that might turn to games to make friends, that might turn to games to--coming back to yesterday--escape. It's like the conservatives who cite the suicide rate among young transgender individuals as proof of their mental illness, when it's more a reaction to their inability to fit in in a world where a good portion of the population treats them as defective or insane, rejects them from the mainstream, and celebrates when our president denies them the opportunity to serve in the military...

I didn't intend to bring this to current politics but the transition is too easy sometimes. My kid turned to witchcraft and she's sullen and withdrawn. It must be that witchcraft led to the withdraw, and certainly not the other way around. My kid is transgender and killed himself. It couldn't possibly be because I rejected him and treated him like shit and kicked him out of the house. It's all too easy to see people making the same blaming mistakes again and again...

Patricia Pulling herself writes in her book The Devil's Web:

I did not feel the shame as I have heard that so many families do when their has been a suicide, but I did feel extreme pain and, to some degree, anger. Yes, anger. Anger that I had not known what was going on in my son's mind, and anger and guilt that I must have lacked something that would have allowed me to know that I had a child in trouble. I did not feel that Lee [her husband] and I were to blame in any way for what had happened, but I wondered why we hadn't seen that something was very wrong. What could have caused our son to become so disturbed, and how did it happen to subtly? Had I not been paying attention? (pp 7-8, cited in Stackpole 1990)

The great thing about Mazes and Monsters is that while its lack of commentary (and allowing the detective's questions and suppositions to go unchallenged) suggests that the game Mazes and Monsters drove Robbie crazy, it offers up enough detail that there is more to Robbie's problems: his missing brother, his problematic history with the game (which could go either way, as far as blame goes), his strange dreams about the Great Hall. It also offers up other clues counter to the game's blame in Kate and Daniel and Jay Jay. They have their personal problems (mentioned here yesterday) and their reasons to play. But, they also have healthy lives, and they manage their college careers.

(There's also something worth exploring in Jay Jay's mother's redoing his room, first as a sterile white room that he compares to a hospital but which reminds me of the room at the end of 2001: A Space Odyssey, later as a homage to Casblanca. Or the inherent fantasy involved in dating when Kate's problem is that every guy she gets together with leaves her. Or the disconnect between what Daniel wants to do with his life and what his parents want; their dream for their son is, itself, also a fantasy.)

This movie aired as paranoia over Dungeons & Dragons was hitting its stride. But the movie doesn't fully latch onto that paranoia. Which may be its saving grace. For a TV movie from 1982, it's not that bad. There's some silly acting choices and cheesy music, but that's par for the course on TV in 1982.