...and you're doing pretty well

Out of nowhere today, it occurred to me what was "missing" in Marshall. Well, not out of nowhere; I was leaving the theater--I saw The Foreigner today before heading off to class, and there was a poster for Marshall in the lobby. And, I realized that Marshall has the same sort of subconsciously racist problem that Birth of the Dragon had this summer, and that numerous other movies have all the time. See, Birth of the Dragon is ostensibly a story about Bruce Lee (Philip Ng), but the main character is the white guy (Billy Magnussen). Marshall is ostensibly about Thurgood Marshall (Chadwick Boseman) but the filmmakers didn't choose a case he won on his own, they chose the case where he brought in the white guy (Josh Gad). Now, these white character's stories are interesting in their own right, sure. But, it's problematic when you tell the story of the famous person of color and you have to bring in a white character to tell the story...

Meatballs doesn't have that problem, of course. Hell, I'm not sure if Meatballs has any people of color at all, but it also it isn't their story. Meatballs takes place at Camp North Star, a Canadian summer camp where race is irrelevant, where politics are irrelevant, where class differences barely matter (outside the rivalry with Camp Mohawk, of course), and where Tripper Harrison has an almost supernatural knowledge of the goings on. Outside the film, stuff like the bus station scene were filmed later to change the focus of the film, but inside the film, it's a nice moment of characterization for Tripper; he may be a bumbling fool, but he also cares about other people. He cares about each and every kid at Camp North Star. I mean, you could imagine that Rudy isn't his only project this particular summer. It's the kind of character Bill Murray was born to play. Like Peter Venkman or Phil Connors. A... I want to say it was a year ago [I checked and it was indeed last September)], there was this thing going around on Facebook, as things do. Like explain who you are using three fictional characters. I chose Mr. Keating from Dead Poets Society, Silent Bob from Kevin Smith's Askewniverse--and Kevin Smith is the celebrity that people tell me I look like more than any other (I've also gotten Jack Black and Zach Galifianakis)--and Tripper Harrison from Meatballs. Like so: 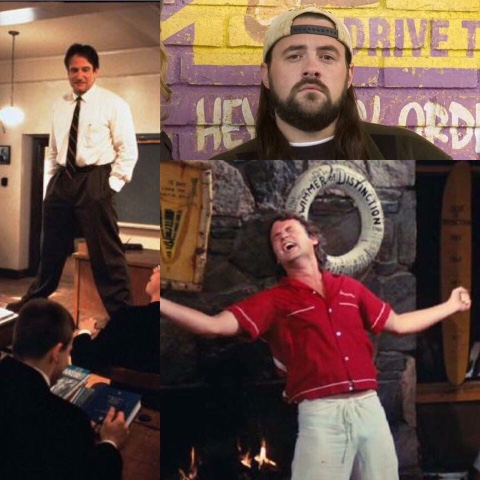 If I wanted to explain my life, I'd probably have to include Phil Connors, but this wasn't about life but personality. The inspirational teaching of Mr. Keating, the patient silence and sage-like advice of Silent Bob, and the chaotic amusement of Tripper. But, I could include so many other characters from the films I've seen time and time again. They get in your head, good characters do. Their lines become your lines. Their stories become your stories. I mean, I actually spent a lot of time camping as a kid, went to Yellowstone once, went to our church's campground at least a couple times a year. But still, the challenges they face in Adventures of the Wilderness Family stand out in just as clear relief sometimes. Blackbeard's irreverence, Luke Skywalker's urge to rebel--these things and so many others are inside me. Like a cinematic foundation underneath my mind, my being, my soul.

And, I only just noticed, after decades of watching this movie, that right before Tripper checks the events Rudy is signed up for, the stick he's sharpening is the handle of a badminton racket.

But, I was talking about my soul. It makes sense. I spent more time watching movies than I ever spent in church. More time watching movies than I spent in Bible Class. And, considering how long school ended, I've spent more time watching movies than I ever spent in school at all, really. Hell, I still do. Today, for example. I saw The Foreigner (great movie for what it is, but what it is isn't something... meaningful) and that's got a near two hour runtime. That's already longer than my class was today (one hour 25 minutes today, and then again on Wednesday). Plus, I'm watching Meatballs which has a runtime of one hour, thirty-four minutes. Teaching involves plenty of work and, especially, planning, outside the classroom, sure. Today, I had to reconfigure some grade sheets for upcoming speeches. But, so does this blog often involve planning... Though, obviously, I love to wing it a lot when it comes to the actual writing. So does anything worth doing. I also spent an hour and a half or so drawing a map for my D&D campaign earlier, for example. (Not every map takes that long, but this one had a bit of detail.)

Which means, I am part Tripper Harrison. Part John Keating. Part Silent Bob. And, part you, whoever you are, reading this right now. And, you are part me.