that'll be the day when i die

It was apparently a coin toss that decided Ritchie Valens versus Tommy Allsup (Holly's guitarist for the Winter Dance Party tour). And Holly's bass player for the tour, Waylon Jennings, gave up his seat to the Big Bopper because the Big Bopper was sick. The tour bus wasn't broken down, but reportedly had broken down at least once so far on the tour. It was the eleventh night of the tour, a Monday, a school night, but Clear Lake's Surf Ballroom was filled with 1100 teens that night. Claire Suddath, writing for Time, 3 February 2009, explains:

The musicians had been traveling by bus for over a week and it had already broken down once. They were tired, they hadn't been paid yet and all of their clothes were dirty. With the airplane [Holly had chartered], Holly could arrive early, do everyone's laundry and catch up on som rest.

The need to do some laundry. A coin toss. A bus that was too cold for this winter tour. An exhausting schedule. And you die.

Doesn't matter who you are. Fictional characters were already dead in my life. Notably, Obi-Wan Kenobi, Aunt Beru, Uncle Owen. But, that's a little different. Watch the movie again, and they are just as much alive as they were the first time. But, a figure from the real world. That text at the end of the film:

Buddy Holly died later that night along with J.P. "The Big Bopper" Richardson and Ritchie Valens in the crash of a private airplane just outside of Clearlake...

and the rest is rock 'n' roll!

That text changes the context for the film. However much they changed details from the true story, it's still based on real people, and at the end of the film, that guy is dead. Watch it again, he's still dead. Like that cloud over La Bamba, the re-view is not the same as the first time. You know what's coming. You know that however great Buddy's upward trajectory, it won't last. Hell, watching that final concert just last night, I forgot from the night before which song was the last one, and was anticipating that freeze frame and text. While the end of La Bamba offers up a greater amount of sadness, this film perhaps offers up a more exacting bit of realistic grief, abrupt, surprising, and with nothing to come after but the end credits.

My grandfather would die the next year. I barely remember him, though I have a vague notion of his funeral. I remember the ending of this film more clearly. That abruptness. That energy and joy and CUT TO oh shit, he died.

Maria Holly, Buddy's wife, would miscarry after hearing the news of Buddy's death. La Bamba shows us Valens' family hearing the news of his. Purportedly, it was this instance that started the standard that authorities notified families before anyone else in the case of a death. 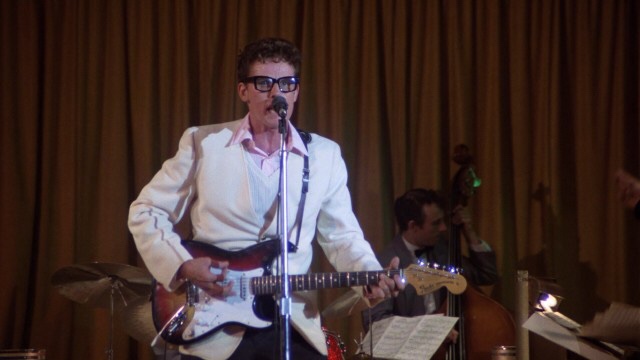 I wonder now if this wasn't my first brush with mortality, as it were. Except, to be completely honest, I don't know when I saw this movie the first time. But each subsequent viewing rebuilds that initial memory, makes it feel immediate again. Every sadness an echo of the previous one.