I have already written about Halloween in this blog. In fact I wrote about every Halloween film but the Rob Zombie remakes:

I covered slasher films for a month, cited Carol Clover's book Men, Women and Chain Saws: Gender in the Modern Horror Film and Richard Nowell's book Blood Money: A History of the First Teen Slasher Film Cycle, cited numerous published essays, you know, took the genre seriously, picked apart its ins and outs, its nooks and crannies. Today, I don't want to do that. I mentioned along the way, during that month of slasher films, a bit of my personal experience, but here I really want to delve into that, into what not only seeing but being quite familiar with John Carpenter's Halloween did to me as a child. 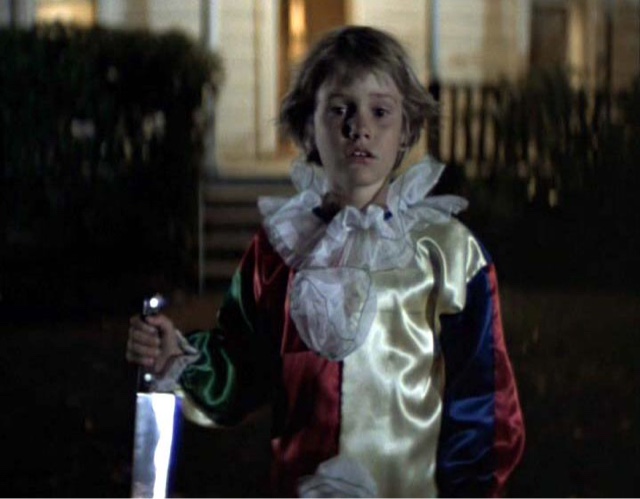 The simple version is this: Halloween, I'm pretty sure, influenced my thoughts on evil more than going to church or private school ever did. I mean, religion messed with my head, sure. Made me fear for the end of the world, the inevitable ignition of the Cold War into World War III and the death of us all; made me have an incessant problem with planning my life too far ahead; made me distrust people in authority. But its idea of evil was maybe a bit too nebulous--vacillating between everybody is capable of doing evil or the devil is sitting around making individuals do evil. Taken on its own--I mean separate from the thorn cult stuff from Curse--this movie offers up a Michael Myers who is... just... evil. Now, I don't believe in evil as a thing unto itself. Nor do I necessarily believe everyone is really capable of evil. We could all do bad things, but evil is a special label that is best reserved for, if we must use it outside of fiction, genocide; slavery; calculated, premeditated murder. But even those things come from underlying psychological and sociopolitical issues, tides of mental faults and societal faults more than specific, singular moral ones.

Loomis certainly describes Michael as something supernatural, driven by something bigger than himself. Given Laurie's teacher's lecture on fate and destiny, Michael is simply--because we do not know yet his connection to Laurie from the sequel--a force of nature, a personification of destiny, of fate, of death... because what fate is there for any of us but eventually death?

Which almost contradicts what I was just saying about evil. Or, rather, I think that contradiction was there in my head when I was a kid and that's one of many reasons I eventually gave up on a religion that wasn't sticking, one of the many reasons that I'm a self-described bleeding heart liberal, because I no more believe in fate or destiny than I do evil. They are exercises in language and philosophy more than anything real. So then, what would Michael be in my head if those more abstract notions weren't sticking? He was one child driven by... something to kill. By what exactly, though? I mean, in film it has always been easy to see good and evil, to let the two sides be clear and distinct. As I got older, of course, I have been more interested in the shades of grey in between. As a child, Rambo gunning down all those Communist soldiers in Vietnam in Rambo: First Blood Part IIwas perfectly acceptable, good clean late-Cold War fun. As an adult, I would see it as the jingoistic fantasy it was, a relighting of the Vietnam War so that America could feel like more of a man... So to speak. Have a look at my blog entries from January 2015 if you want more of that angle, American hegemony in decline, American manhood challenged by the loss in Vietnam, and the Cold War waning, we needed big strong American men to go kill a lot of foreigners, many of them Communist or from the Middle East... Actually, I suppose we haven't come that far.

What strikes me now, trying to think about Halloween without the context of all the slasher films that came after, is how simple and normal it is. And, just how much more troubling that makes it. It is not until the sequel that Carpenter links Laurie to Michael. Here, Laurie, Annie, Totally... And I had to laugh because I could not think of Lynda's name. My sisters and I have always just called the character Totally. I'm typing and that's the name that comes to mind. But, back to my point. Laurie, Annie, Totally--they're just regular teenage girls

doing what teenage girls (especially after the sexual revolution) might do on Halloween night--babysit, and invite boyfriends over for sex. Or on a more innocent level, they're just worrying about the dance scheduled for the next night. (And, honestly, Annie and Totally are not very nice to Laurie (or to each other) except for the Ben Tramer thing.) And while it feels for a while like Annie might be as important as Laurie, we're with Laurie, the more innocent of the three, from the start. The final girl doesn't exist yet. There's no cabin, no illicit sex (until there is), and the drug use is so very casual. Haddonfield is just a nice town in Middle America. And evil born there has returned.

Watching it this week in particular, it's like a metaphor for mass shootings. We couldn't possibly understand why someone would do such a thing, so call it evil, call it madness, and we're off the hook for fixing it. If the shooter is a Muslim, call it terrorism and, again, we're off the hook for fixing it, because that's just a bigger evil, and we're already at war with it. Never try to figure out where it comes from, never try to solve the underlying causes. Just hope for a good guy with a gun, or a whole lot of good guys with guns on the battlefield. (Or hope for a final girl, I suppose.)

And, I was trying to stay back there in 1978... Or close to it. I don't really know when I saw Halloween the first time. I did see it in the theater, but I'm pretty sure that was a rerelease on some later Halloween. However, when they were filming Halloween II and I saw some of that filming, I already knew Halloween. That came out in 1981. I was five. And, maybe the idea of an actual evil appealed to me. Like if evil were just "the Shape" and it killed indiscriminately, then I could actually be comfortable in that powerlessness. Or, walking past a certain tree in South Pasadena that had a lump that made it look like a guy was standing behind it would bother me for years, even though I had seen it during the day, knew it was just a large knot. But, even better for me, as a kid, was that the evil in the film was far away. Either the fictional Haddonfield, nearly 2300 miles away in Livingston County, Illinois, or South Pasadena, which was 5 miles away. And, we visited there regularly as my oldest sister would marry into a family that lived down there and would move there a couple years later. That tree was just a couple blocks from the "Myers House"--

And I would never set foot in there.