i thought you said you had it

And it had a character named Horse! This really confused them. I'd told them my character in the movie was named Horse, so they're watching this flick and a guy called Horse shows up and he's clearly not me. They were really peeved at me.

As for the final title, in that same Vanity Fair piece, producer Daniel Goldberg explains:

We were going with the name Summer Camp for a long time. I don't remember when we changed it to Meatballs, or why. I know there's a scene where Fink called Spaz a meatball, but that's not why we changed the title.

But, director Ivan Reitman told Yahoo! in 2012, in response to the prompt: "Having watched the film a few times now, I still have no idea why it's called "Meatballs."

Neither do I. It seemed to be one of the staples that was part of camp food. Spaghetti n' Meatballs. And meatball also has a secondary connotation, as in goofy. We couldn't call it "Summer Camp" cause there was going to be another summer camp movie, so it was just a name I came up with.

Let's break that down in reverse order.

First, the idea that they changed the generic title because it might also fit some future film amuses me. I mean, in a universe where you've got bullshit generic titles like American Haunting, Sniper, American Sniper, The Gunfighter, Lawless, Deception, Defiance, Criminal, and far too many more.

(To be fair, sometimes a deliberately generic title can work if 1) the film has some ambiguity that makes it appropriate or 2) the film is amazing. Think SE7EN, think Halloween, think most any action movie from the 80s--Commando--though not all of those are actually any good. Hell, think mother, think A Ghost Story, think The Lobster.)

If you get there first and you want the generic title, you take the generic title. Unless you're worried about trademarks, or being unique, standing out. You know, like Airplane!. I meant that sarcastically, but, you know, maybe that exclamation mark does set it apart just enough that you don't have to know the film specifically, or maybe the real reason we remember Airplane! more than we remember Airport or Earthquake is that comedy holds up better over time, and disaster movies are oddly not timeless. And, we remember Meatballs not because of the title but because it both captures that romance and nostalgia of summer camp and plays for a remarkably subversive and, at the same time, wholesome comedy... Or, possibly, Meatballs was just the kind of title a film needed to get people to pick up the video from the shelf at video rental places in the 80s. And that means everyone who grew up in the 80s saw it at some point, and they got older and shared it with their younger siblings, or their kids, and despite a few bits of fashion that rather fortunately stayed in the 70s, and some schmaltzy music*, the film is timeless, is evocative of memories and fantasies about summer camp.

As for meatball as slang. English Through the Ages (Brohaugh 1998) has the use of the word meatball somewhere before 1840; and that's the food. It has no listing for meatball as slang, but meathead was in use by 1945. The online Free Dictionary lists the slang definition (not counting the baseball reference) as either "a stupid, clumsy, or dull person" or "a stupid or boring person". The Google Ngram for meatballs gets its line going in the 1930s and rises substantially in the 60s and 70s. Meatballs with the capital M rises in the 70s, and peaks in the 90s. Referring to the title song for the film, Will at a blog called grain&noise, explains:

The song was written by Oscar-winning composer Elmer Bernstein [who took on composing for this film on spec because he liked what he saw]. The same guy who composed the themes for classics such as The Magnificent Seven, True Grit, and To Kill a Mocking Bird [sic]. The song is performed by Rick Dees a radio DJ who voiced a character on the Flintstones cartoon named Rock Dees and had one other "hit" with Disco Duck.

Regardless of its unique pedigree, Meatballs (the song) is a cringe inducing mash up of uninspired disco instruments and bizarre meatball related lyrics. Including: You don't want to be a meatball, with meatsauce on your face. The lyrics are particularly odd because never in the film do any characters eat meatballs, nor is anyone referred to as a meatball. [He's wrong on that one.] Begging the question "Why meatballs?". We're given no explanation. In fact, the chorus/hook of the song is just the repetition of the word "meatballs" sung by a heavy baritone followed by a female harmony.

But, I cannot really trust this blogger Will because 1) he's a blogger, what do they know? and 2) he says of the film, "The film itself is not much better. It can only be described as "whacky"... the film is so sentimentalized and the script is so poorly written that the film comes across as little more than a string of hastily drawn sketches." Now, yes, the film does play like a series of sketches, which 1) makes sense because it was made by several people involved in sketch comedy, and 2) putting a more exacting plot over the top of it would have made it rather silly; I mean, there's a reason summer camp movies have simplistic or nearly-nonexistent plots--the point to telling a story about summer camp is not the plot. Little Darlings is about girls trying to lose their virginity at camp. Poison Ivy uses a love story as its backbone but is also a bunch of vignettes involving campers. Friday the 13th (and its sequels) is a bunch of vignettes about oversexed young adults who most people should be shocked are trusted to run a summer camp and many of those vignettes get interrupted by at first some random old woman and then by her deformed son who apparently likes hockey. Now, that last bit was a joke, of course. But, seriously, summer camp is a bunch of discrete situations, different activities and sports shoved up against one another, a bunch of disparate kids and young adults shoved up against one another, their lives intertwining just temporarily and then twisting apart. Also, since we're talking about words, note my use of vignettes instead of sketches. The latter is not inherently negative, but it does suggest a haphazardness that I don't think this film involved. Not any more than, say Casablanca, which didn't even have a completed script when they started filming, and go rewritten on the fly. As many movies do. Nor, by the way, do I think whacky is inherently negative, but Will definitely means it as an insult.

Meatballs being a staple of camp food--I can buy that. Plus, separate from why the filmmakers went with the title, there's the more important question of what does the title mean? Like, why, cosmically, is this film called by this title? And, the idea of meatballs as this basic, easily mass-produced foodstuff, formed out of random bits of meat shoved together to form a delicious whole--this works for me. I mean, consider the ensemble of characters: Tripper, Roxanne, Mickey, Rudy, AL, Wheels, Crockett, Candace, Spaz, Fink, Jackie, Wendy, Hardware... plus Brenda, Jody, Lance, Phil, Horse. There can't be just one plot here. And these characters all have their moments to shine (for good or bad). In a way, the film should almost be Meatball, singular. These characters are all just the ingredients in this big movie meatball, wrapped up in a ball, fried, served on a heaping dish of spaghetti, then eaten, never to exist in that particular form ever again. Just like any group of people at summer camp.

Or, they could have called it Hot Dog. 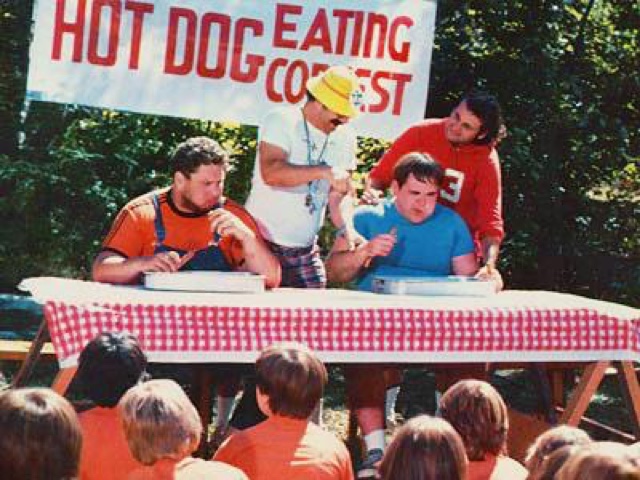 But, then, what would that skiing movie have been called five years later?

(Also, I may have to skip the next movie and come back to it. Turns out the guy I bought a cheap copy from decided not to even ship the damn thing until this morning, 8 days after I ordered it, and 3 days after the supposed arrival date. I shall have to write scathing feedback.)