i wish i had you all alone

Taken out of the greater context to come--the slasher film as a thing--Halloween is almost deceptively simple. Michael is given no motivation but for that Loomis puts upon him.

I met him fifteen years ago. I was told there was nothing left. No reason, no conscience, no understanding... even the most rudimentary sense, of life or death, good or evil, right or wrong. I met this six-year-old child with his blank, pale, emotionless face and the blackest eyes. The devil's eyes.

I spent eight years trying to reach him and then another seven trying to keep him locked up because I realized that what was living behind that boy's eyes was purely and simply evil.

I watched him for fifteen years, sitting in a room, staring at the wall, not seeing the wall, looking past the wall, looking at this night, inhumanly patient, waiting for some secret, silent alarm to trigger him off. Death has come to your little town, Sheriff.

And, of course, after Laurie calls Michael the boogeyman...

As a matter of fact, it was.

In fact, it's even simpler in execution. Laurie literally draws Michael to her early in the film when she sings today's blog title. (Michael is actually quite open to instruction, really. When Bob tells him to "come on out" of the pantry, he comes on out of the pantry.)

But, I love to complicate things. Regarding silence in the film, Tiffany Bryant (2014) has a great bit about the role of Dr. Loomis... I notably dismiss Loomis as inconsequential to the plot in my YouTube video about the Top Five Slasher Films, though as a character Loomis is amazing, and Pleasance's performance raises it even higher than the script does. But, Loomis loved, however useless he may be. (It's the Indiana Jones problem, really. It doesn't matter if he affects nothing in Raiders as long as it is entertaining to watch him not affect it.) (He also doesn't seem to understand his own gun (or the editing is messed up); after firing six bullets into Michael, after Michael has fallen out of sight, Loomis pulls the trigger one more time.) 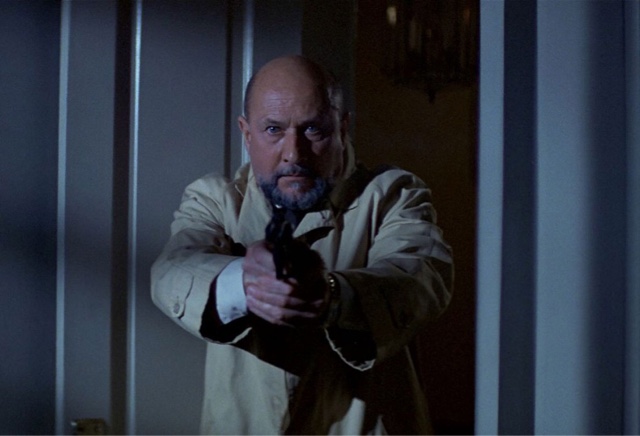 Interestingly, the performance of "silence" functions heavily in Michael's mysterious and frightful conduct. Carpenter renders Michael absolutely mute, so the viewer learns about Michael predominantly from Dr. Loomis's analyses. By being the "expert" voice to rationalize Michael's actions rather than Michael explaining himself, Dr. Loomis represents the normatized, credible patriarchal figure of Western Science--

I will interject to suggest that Western Society would be a better fit for Bryant's point than Western Science. Also, as John Kenneth Muir (2009) points out, Loomis "is a total and complete failure as a psychologist, unable not only to heal Michael Myers, but to understand what drives him." But, let us return to Byrant:

--to stand in and dictate the course of action necessary to stop the deviant slasher, shifting from an initially understanding and empathetic opinion to one desperate to terminate the overly-aggressive threat to the Haddonfield community.

Of course, Bryant neglects to mention that Loomis' "empathetic opinion" is long past by the time the present of the film begins. Sure, he spent eight years trying to reach Michael, but we don't see any of that. Nor should we. Rob Zombie's remake takes time building up Michael's troubled childhood, bullied by other kids, bullied by his mother's boyfriend, by his older sister, but that is psychological pretense (or pseudo-psychological pretense, because the film doesn't really delve) in place of one of the elements that made Halloween such a classic horror film, one that people return and return to even still--Danny McBride and David Gordon Green are currently at work on yet another sequel--the mystery. The previously referenced Muir compares suggest Michael may be a "modern-day 'dragon' in a society that no longer recognizes dragons as real monsters" and Loomis' role is "explicitly that of St. George: hunting down and slaying the dragon." (Except, I think the dragon St. George slew remained slain.) Or as long-time reader Maolsheachlann put it in a comment yesterday (on yesterday's blog entry, anyway), Michael represents an "evil" that is "pure malice, something primal and non-negotiable. That's what's terrifying about Michael Myers, he has no character aside from unrelenting murderousness." The film offers Michael as something inhuman, and increasingly supernatural. For me, on a personal level, he was something more down-to-earth, a shadow that could be on any suburban street, a nameless threat of violence that loomed in the dark wherever I might find myself in the dark, but still, yes, unrelentingly murderous.

Again, there is a reason we are there with Laurie in class. Sure, it establishes that she is the smart one of this trio of young women we're following. Sure, it establishes that Michael is stalking her even before she is with the other two--setting her apart for no particular reason other than, well, she sung for it. But, the teacher could have been talking about anything. Anything at all. But, from the shooting draft of the script, the teacher is talking about fate.

And, I was hoping that Costaine and Samuels were specific references to real authors, that Collins was a character in one of Samuels' books. But... I'd like to say a quick Google search ruled that out, but it was a series of Google searches with varying combinations of names and terms, all of which eventually brought me to people talking about Halloween. Plus, the name in the shooting script is Rollins, not Collins. (Also, in that script, the teacher asks some student named Edwin the question before she asks Laurie, and he offers up an inane wrong answer: "Uh... Doesn't he feel that no matter how complicated something is, it's also really simple too?") This lesson is not random, not supposed to be meaningless and forgettable. This is Carpenter's and Hill's point. Michael Myers, in this film, is an agent of fate. Whether fate is evil or not--well, that depends on if you side with Costaine (or Loomis) in attributing fate to being related to religion, or you side with Samuels, that fate is a natural element. Either way, fate is immovable, unstoppable. Fate never changes.