Halloween, the original Halloween, isn't about a lineage of evil, or psychic kids, or Druid cults, or live streamed haunted houses or even Busta Rhymes. Halloween is about Michael Myers and, perhaps most importantly, the concepts of fear and responsibility. It's about The Boogeyman. A specter of judgment and fear designed to scare children into behaving and punish those who don't.

I think I can get behind that. Like the horror film version of Bentham's panopticon.

Kids, don't go out at night and get up to no good things like smoking pot and having premarital sex, or a mindless killer just might find you, strangle you, slit your throat, or pin you to a kitchen cabinet with a knife, then leave you as part of a tableau of warning...

I've got so many different articles and blog entries, even a couple books on Google Books, open on my phone, plus a binder of pieces about slasher films in particular next to me, but cannot find the specific piece I noticed last night that mentioned how Laurie gradually becomes less of the good girl as the film goes on. (Or maybe it was my own observation.) She initially goes to school in a nice conservative outfit, skirt, leggings, turtleneck, cardigan. For babysitting, she wears slacks, a blouse, a sweater. On the way there, she smokes pot. She expresses interest in a boy, Ben Tramer, when she was all babysitting and responsibility earlier when Annie and Totally were talking about their boyfriends. By the time she finally meets up with Michael, she wears an open blouse, and she even leaves her child charges unprotected (though she does check on them before heading across the street to the Wallaces' house). But, really, I think the fact that Laurie has her clothes on at all sets her apart from the other young women. But, it's an interesting thought. Slasher films offer up young men and women (mostly) on their own, fending for themselves in a world where, just a few years earlier, they might have been quite content to let their parents protect them and tell them what to do. Talking specifically about Freddy Krueger in A Nightmare on Elm Street--but the same is true for any of these slasher film killers--Gill (2002) suggests he "serves a bizarrely apotropaic function: his savage presence wards off the far more unsettling circumstance of unknown evil, of personal guilty and social indifference." Gill cites Mark Edmunson's book Nightmare on Main Street: Angels, Sadomasochism, and the Culture of Gothic (which I totally don't have but now really want); Gill explains,

For Edmundson, gothic despair is a salve, a manufactured, albeit gloomy, meaning that relieves us of making meanings of our own, of living through an engagement with "the complexity of our problems and the breadth of our responsibilities" (68). It is also a catalyst for what Edmunson's calls "a culture of facile transcendence," a contemporary willingness to look for salvation in the forms of simplistic pop psychologies and group therapies, psychic hotlines, uplifting popular novels and self-help books, narratives of angelic intercession and spiritual redemption, and "fantasies of renewal"... Our contempt dry gothic fears astonish us, freeze us intellectually, successfully short-circuiting the possibility of any imaginative personal or social transformation. Gothic despair becomes an end in itself, a point of stasis resistant to visionary change. (p. 17).

But, we've got two slightly different subject lines going right now. On the one hand, the slasher film, the implications of punishment for those who transgress sociocultural norms, the immortality of the killer, the survival of the final girl--these work as, as I already suggested, a cinematic version of the panopticon, a control mechanism for young minds in the audience, and a visual sort of wish fulfillment for the older minds in that same audience. Our way of life was better, our rules need to be followed, of course those young people should be punished for doing drugs and doing each other. On the other hand, we have this larger societal need for external fears, even clearly fictional ones, to keep our minds away from the far more real fears we should be feeling. Put both of these things upon a story focused on young people (usually) acting outside the purview of adults, as well as outside the bounds of normative (read: conservative) behavior, and there is a clear point about a couple things: 1) teenagers exist in the liminal stage between needing protection and being able to protect themselves, but 2) they believe themselves far more capable than they are, and they don't need adults in their lives, so 3) they choose what rules they follow or don't follow because they are seizing responsibility. In that sense, Halloween is a touchstone of the genre because of the babysitting. Laurie and Annie (and implicitly, possibly, Lynda) babysit for cash, sure, because cash grants independence. But, in babysitting, they take on a traditionally feminine, motherly role. They are buying into societal norms even as they (Annie far more than Laurie) seek independence. Meanwhile, their parents are absent. Or ineffectual. Annie's father is the Sheriff, but he is ultimately even more useless in fighting Michael than Loomis is. Quoting Elkind (1994), Gill explains a key dilemma for young people in these situations (or just in the real world)--

"Even though young people are now exposed to demands for identity formation from an early age, they still need time in adolescence to adjust to their new body configuration, their new emotions, their new thinking abilities, and their new patterns of social interaction" (153).

The family dynamics and adolescent troubles in slasher films graphically bear out the concerns of [Elkind] above. Parents in these films are generally absent, either physically or emotionally. They have demanding jobs, working late in the vending. They go on business trips or on vacations without the kids, or on getaway weekends with friends. Sometimes the parents have drinking or drug problems, or are involved in new relationships. Some parents are well-meaning but inept and insufficiently attentive, making a show of interest while failing to grant the seriousness of their children's worries and fears. Other parents are exacting, abrupt, and impatient, too concerned with their own pleasures and desires to pay attention to the needs of their children. At no time to parents attempt to set values or explain limits. They may constrain their children, but they never teach them. (pp. 18-19)

Sheriff Brackett (though he only barely interacts with Annie in the film) is one of those inept parents, and an inept sheriff. Just as Loomis is an inept doctor, serving more as a Kassandra calling out the danger to deaf ears. This is the point, of course. The adults cannot help. By venturing out of the home, taking on boyfriends and babysitting jobs, by choosing to do drugs and have sex, these teenagers have chosen to grow up. They are rejecting the protection of the panopticon, even as a darker version of it is stalking them to punish them for choosing the wrong path.

Murray Leeder (2014) takes it into a darker, older, literary direction, linking Loomis to the narrator of Lovecraft's "The Call of Cthulhu" who "opines that 'the most merciful thing in the world, I think, is the inability of the human mind to correlate all its contents. We live on a placid island of ignorance in the midst of black seas of infinity and it was not meant that we should voyage far'" (p. 92). In these terms, perhaps Lynda and Bob are the ones most benefiting from such mercy. They have no idea what's coming for them. Bob barely has time to grasp what erupts from that pantry before he is pinned to the cabinet. Lynda never sees her attacker at all, thinking it is Bob under that sheet. Annie may have an inkling, as she knows that Laurie has been seeing someone watching her, and Annie just isn't having a very good night, what with Paul being grounded, and spilling butter on her clothes, and getting stuck in that window. Still, her ignorance, in that moment that she realizes the car window is fogged, is bliss. In that way, perhaps Laurie venturing out of the Doyle house, leaving the kids behind, is not irresponsible at all, but rather Laurie becoming an adult. Virgin or not, good girl or not, in that moment she is like the other adults, going out into the world with an idea of just how dangerous it might be...

Unless, of course, she has been deluded by the horror films she has seen into ignoring so many real world dangers in favor of imaginary ones. Michael's trophy tableau, and Laurie's mind breaking at its sight--that is like some Lovecraftian moment, the terrible and real replacing whatever she might have imagined was going on, and dividing her life into all that has come before and all that might come after, if she can just manage to survive. 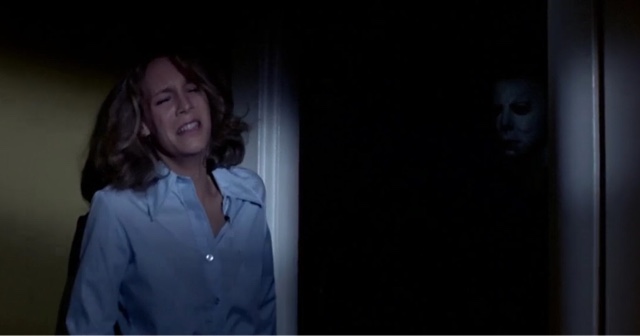