It occurred to me watching The Jerk that "jerk" didn't necessarily mean the same thing in 1979 that it does today. Words change, connotation changes. Today, Merriam-Webster defines "jerk" as a: "an annoyingly stupid or foolish person" and b: "an unlivable person; especially: one who is cruel, rude, or small-minded." Anecdotally, I can say most people I know (including movie characters) tend to use "jerk" to indicate that "b" definition. Specifically, I use "jerk" to describe someone who is deliberately or impulsively hurtful. But the Online Etymology Dictionary points out that in 1935, coming from "American English carnival slang, of uncertain origin", "jerk" referred to a "tedious and ineffectual person." This feels more accurate to describing Navin Johnson in The Jerk. He's far from cruel. In fact, he's almost obnoxiously pleasant, like when he gets that first ride hitchhiking, and the guy drives him only to the end of the fence, and Navin thanks him cheerfully for the company. (Plus, he even works at a carnival for a while.)

Additional evidence: director Carl Reiner (who appears as himself late in the film) was born in 1922. Writers Carl Gottlieb, Michael Elias, and Steve Martin were born in 1938, 1940, and 1945, respectively. All old enough they grew up closer to the carnival-derived definition than the more recent application to mean people.

All this got me wondering if this film isn't a sort of hundred-years-on rumination on Dostoyevsky's The Idiot. But, then, I gotta remind myself that I have not actually read The Idiot, though I have read other works by Dostoyevsky. I could Phil Connors it (or Danny Rubin it, I guess) and just pretend that I know it; you know, "When Chekhov saw the long winter, he saw a winter bleak and dark and bereft of hope" and all that. When Chekhov was apparently pretty funny in the original Russian; translations just lose all the fun. Like, for a history class in college we read Nikolai Gogol's Dead Souls, and the professor steered us away from one particular translation. I checked out that translation at the university library and saw that it was much more dry and boring, while the translation the professor suggested conveyed more of the humor--it's a whole satirical thing about a guy buying up ownership of dead serfs before the next census, getting rich by buying cheaply the thing no one wants. It's a thing.

A simple comedy film could easily be a new version of something older, something from literature. Or maybe the story of an idiot bumbling his way through the world is just so obvious that it's going to be told again and again. It's an easy entry point for satire. Navin Johnson sees the world like a child sees it, and that leaves room for the audience to look at aspects of the world in a new light (or old light, as the case may be). How does Navin view romance, perhaps? How do you? How does he view monetary success? How do you? How easily does he trust other people? How easily do you? Same goes for a character like Forrest Gump, like Lloyd Christmas, Billy Madison, even Jeff Lebowski. Simple-minded character, limited reactions to the wider world, this leaves room for the audience to inject themselves, or to be shocked or surprised by it all. 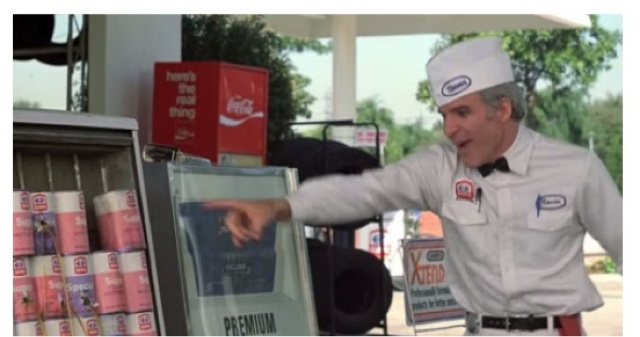 By the way, I finally looked it up, and the original title for the film was Easy Money, but reportedly (I got it from a Mental Floss piece, so I don't know the original source of the quote), Martin told Reiner that the title "needs to be something short, yet have the feeling of an epic tale... Like Dostoyevsky's The Idiot, but not like that. Like The Jerk."

So, either I'm brilliant.

Or it was really obvious.