you know this is not life

The big problem I've got with Heaven Can Wait is that so much of it plays as just too easy. Joe dies, and he's the only dead person who doesn't want to get on that Concorde at the way station? He gets to inhabit (temporarily) the body of a rich business man, and he can reverse all the bullshit corporate norms that just happen to be awful in reality with one board meeting? The first woman he meets in his new life just happens to be the love of his life? This one is really part and parcel of the point of the film, but he buys the Rams and they rush him and rush him to let him know they don't want them there and one successful pass and they're already turning around? Tony is setting up to kill Leo (Joe) a second [correction: third; I forgot about the ceiling mirror collapsing onto the bed] time and the film has set up the cannon firing when they take the flag down at the end of the day, so that detail is fine as a coverup of the gun noise, but Joe just happens to stand in front of the well at that exact moment that Tony needed to shoot him, so there's no body, no messy cleanup? I accept the third body--Tom Jarrett--as heaven autocorrecting for Joe's heavenly escort's mistake, but Betty for some reason has to go meet Corckle at the stadium right after the super bowl (and the logistics of getting in there wouldn't be difficult at all right then, no) even though she was literally just at a crime scene where police would probably want to ask some more questions of everyone involved?

Take, for example, the politics of Leo Farnsworth's business practices. Perhaps one of the reasons a politically savvy guy like Warren Beatty took on this film in the first place. (Bulworth, years later, is basically this piece of this story rewritten as its own tale.) Farnsworth's business, ExoGrey Industries, is actively producing plastic soda bottles that poison people, has a nuclear power plant dangerously situated on the San Andreas Fault (which made me curious about actual nuclear plants in California, and apparently, the last one closed last year), is knowingly killing porpoises in its collection of tuna, is displacing multiple communities (and the ones left behind nearby "will have their health endangered by the inevitable poisoning of their air and water") in England to build a refinery, and is (apparently) trying to buy Haiti (yeah, the whole thing) for its sugar. Personally, though the details are never quite spelled out (his wife simply calls him a "lecherous, sadistic son of a bitch"), he is awful enough that his wife and confidential secretary are having an affair rather openly and made the effort to poison his nasal spray. Interestingly, despite his meeting Betty and his urge to help her being his reason for accepting the body of Leo Farnsworth, he actually tells Mr. Jordan to find him a body that can play quarterback before the board meeting; he resists his own urge to do anything.

I really want to write about the business and the politics, but the film wraps all that up with one speech at one board meeting and moves right along to Joe's football training. I mean, I know Beatty directed this film because it would be an easier directorial debut than Reds (which he wouldn't release for a few more years) but it's almost too easy. No. It is too easy. But, it's also kinda pleasant. The simple theme music that repeats throughout, a little jazzy, keeps things moving. And, the whole plot is just so... breezy. I want to take the board room scene and break it down, use it to explore real world easy fixes for problems we debate constantly. But, it all plays out in such simple terms--"Would you pay a penny more to save a fish that thinks?" indeed. Like the movie wants its cake and wants to eat it too, as it were. Throw in some political depth, sound progressive, sound transgressive, counter the corporate power that destroys lives and environments. Then move the fuck on with more than half the movie to go. It's like the politics of Bulworth--and don't get me wrong; I love that movie--it sounds progressive and shocking as it goes because this rich white guy is going against everything rich and white, but when you think about it, so much of what he says is so fucking obvious that the reason we aren't already acting on what he's saying is not because no one is saying it but because so damn many of us 1) don't want to hear it, and certainly wouldn't say it, even if we believed it because 2) that would upset a world order we have painstakingly built for ourselves--and yes, I'm talking about white people, I'm talking about America, land of the free, built on the backs of slaves, home of the brave, unless that bravery means standing up against the status quo, because there was only one fucking revolution worth a damn that that one happened in the 1770s... oh, and that failed revolution in the 1860s, and don't ever think we're not still bitter about that one; and 3) we would rather be unwitting oppressors than ever dismantle a world that tells us we're special just for being born white, and preferably male. Maybe Joe's disruption of ExoGrey's business practices stood out as something shocking and progressive in 1978. Or maybe it is simplistic characterization to let us know that Joe doesn't doing anything the conventional way... Except, he literally moves in the opposite direction after that, by using his position of power and his money to force his way into the Rams organization. Nevermind who he really is; I mean, going ahead with throwing his privilege around because of who he was before is the same bullshit thought pattern that leads to stuff like MAKE AMERICA GREAT AGAIN and every conservative generation thinking the world was better before. You know, before black people had rights. Before women had rights. Before foreigners had rights. Before gay people could be gay in public. Before Joe had to stoop to being a rich white guy instead of... well, as he was about to be starting quarterback for the Rams, a different, slightly less rich white guy. 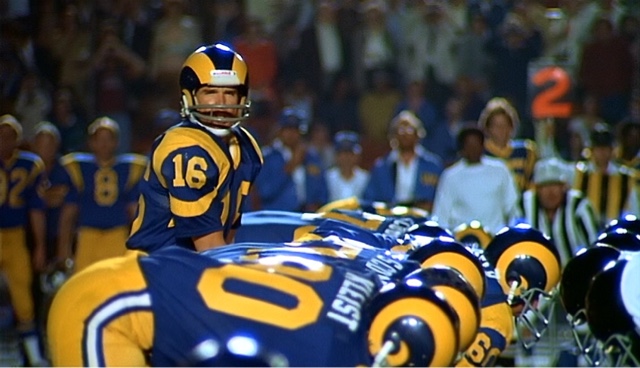 For that matter, Beatty wanted to make Reds, wanted to tell the story of John Reed and the Communist revolution, but he's stuck in--or he's benefitting from--or both--Hollywood, where you can't just do that sort of thing out of nowhere. Sure, Hollywood is a liberal enclave, but that only goes so far before it falls apart. And it wasn't always the case. Take the blacklist, writers like Dalton Trumbo having to resort to cheap B-movie scripts to live, and only barely squeezing an anti-establishment script like Spartacus through. It's the Overton Window thing again--if the audience drifts right, Hollywood can only promote leftist ideals so much without losing cash. And, even if it does manage to seek an idealistic, leftist vision, the audience will be small, or it will play as a fantasy like Mr. Smith Goes to Washington; like isn't that cute, he thinks he can change Washington, he thinks he can change the world. Joe thinks he can change ExoGrey. But, you can't change such behemoths suddenly. One man against the world is just a fantasy.

That doesn't mean you don't try.

The big problem here is that the first act of Heaven Can Wait plays like a liberal fantasy, dismantling dangerous corporate practices to save the world. Plus, with Leo dead not much later, and his wife accused of his murder, his changes are not going to go into affect any time soon; rather some temporary blind trust will make sure everything is business as usual. But, then act two is something else, a conservative fantasy perhaps, an embodiment of the so-called American Dream, that anyone can pull himself up by his bootstraps, especially if he's got millions of dollars to throw around, and be exactly who he wants to be simply by force of will. (Leo/Joe may actually be a good quarterback but the film makes the individual quarterbacks so interchangeable that that doesn't matter.) And, act three, especially the culmination of the love-at-first-sight throughline--what is that? Is that a liberal notion, a conservative notion? A ridiculous notion? A figment of Hollywood's, and our collective, imagination? Just like Corkle's ability to drive through Los Angeles during the student-death overtime and make it in time for the locker room celebration afterward. I guess he found one of Jack Bauer's wormholes.