go out with a musician

The opening shot of The Buddy Holly Story is a neon sign above the Moonlight Rollerway. The sign is, of course, the shape of a crescent moon. Something bright in the night sky, but also something partially hidden from view. It's actually a pretty good way to start this or any biopic. Take the stuff we already know about a particular artist, take some significant moments that maybe we don't know about and try to paste them all together to make a story. I don't dislike The Buddy Holly Story but there isn't much of a story to it. I said yesterday that it feels like more a series of vignettes. This is, in a way, the formula of any biopic, not just this one. Well, musician biopics, at least. And it almost has to be. Filmmakers trying to tackle a musician/celebrity seem to always want to tell--and this distinction matters--a complete story rather than a complete story. Compare any biopic like this--The Buddy Holly Story, La Bamba, Walk the Line, Ray, even Straight Outta Compton--to something like The King's Speech or the upcoming Darkest Hour (at least, I hope so). The latter takes a public figure as the focus but tells a story that is bigger. I think back to a fictional film about a musician, Hustle & Flow, and how it' simple story of a pimp trying to create a single hip-hop song evokes a larger story about the creative process, about the inspiration for creativity, about what a musician goes through not just as vignettes in some set tale with a decided end but in direct relation to his music. The same goes for something like That Thing You Do! or the semi-fictional 8 Mile. The plot is not trying to be a life story, so the focus can actually be both more intimate and more universal.

But, something like The Buddy Holly Story operates in such a way that I cannot imagine it being that enjoyable to someone who doesn't already like Buddy Holly... Except, that isn't quite right. I mean, I didn't really know Ritchie Valens' music until La Bamba (despite his being contemporaries with Holly (and dying in that same plane crash) my mom wasn't a fan of his as she was of Holly), and if memory serves--

(And, given the way I've been treating movies in this blog perhaps since its beginning but especially of late, the memory of the film is what matters more than the film itself quite often if not always)

--the beats of that movie are basically the same. Though it feels like the tone is different. A look at Roger Ebert's review of La Bamba and, yeah, there's a darker edge to that one. "The opening scene [of two planes crashing into one another] is followed by several other references to Valens' fear of flying," Roger explains, "and the effect is to put the whole movie under a cloud, to weigh down every scene with the knowledge of impending death." Additionally, that film takes us past that last concert in Clear Lake. It shows the coin toss that decides who gets on that plane, it shows the family hearing the news of Ritchie's death on the radio. It's a much more melancholy sort of thing. (Compare that to the roller rink opening of The Buddy Holly Story, the mindless energy of a sequence that could easily have been skipped entirely and the film wouldn't be that different.) Still, the way Lou Diamond Phillips plays Ritchie Valens, he seems a more intense young man, more driven while Gary Busey's Buddy Holly is a little aloof, and even rather cruel to his girlfriend early in the film, and his drive is almost hidden... or assumed. He's got a style that is unique, and Busey plays him as someone unusual, but like the vignette approach to story, it's as if Holly is a prop more than a character... Even though Busey infuses him with something quite watchable. (Just watch him performing "Every Day" and try not to be--smitten is the wrong word, but definitely rapt.) I'm talking structure, not performance. That performance earned him an Oscar nomination. 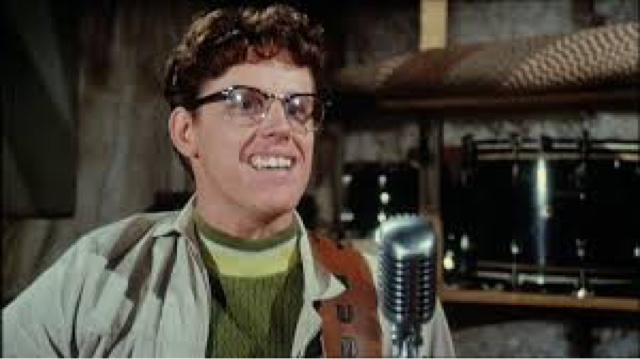 A big part of what might make this film different from La Bamba might simply be that there was less already known about Valens. As Roger explains it,

Valens only had three hit songs. His public career lasted less than six months. He died before he was 18. There isn't a wealth of material to draw from as there was for "The Buddy Holly Story." So Luis Valdez, the director, fleshes out the story with information about Valens' family, especially his hard-working, cheerful mother (Rosana De Soto) and his half brother (Esai Morales), who both supports him and resents him.

Faced with less of the well-known stuff, the story had to be fleshed out. The Buddy Holly Story, on the other hand, comes from a book, John Goldrosen's Buddy Holly: His Life and Music. If anything, it had too much to try to fit into a reasonable length.

If you already know the basics, if you're a fan of Buddy Holly, if you're a fan of rock and roll history, then you can still appreciate the beats of the story. Back to Roger, because honestly I was about to use a phrase he uses: "Holly's life provides a microcosm of rock and roll's transformation into the dominant music of the last decades [50s to 70s]." If done at all well, any musician biopic should give us a microcosm of the time, of the music. Given my love of film, when I was a history major it shouldn't be surprising that I imagined teaching a class structured just around films. Like, it's time to cover the American Civil War, let's watch Glory and Gettysburg and Lincoln and... Well you might get the idea. It's like something my bible class teachers used to say (pre-Internet, of course), that if every copy of the bible were destroyed, we could reproduce it just from all of the times it has been quoted in so many other books, in newspapers, in magazines, everywhere. I wonder if certain historical events--the Japanese attack on Pearl Harbor, for example--have been put to film so many times that you could build a real-time model (albeit, probably inaccurate) of what happened. Take The Buddy Holly Story, pair it up with La Bamba, get a film together about the Big Bopper--apparently, there isn't one... filmmaker Sohrab Mirmontazeri was supposedly working on one a decade ago, but I guess it never happened. Get those together and maybe Ray--it's been a while since I've seen that one, and I can't recall how much this late 50s period was part of that one--and you could imagine a sort of time capsule of music in 1959... Or something like it.

And, I forgot to get to the thing this movie taught me. Of course, tomorrow's Thursday, which means I will have to watch the movie in the morning, so it'll only be another 12 hours or so before I get to it.