come back to me

That bootstrap paradox is vital to Somewhere in Time. In another story, it would be a stranger mystery, or a misguided mistake. Here, it is fundamental to the story being told. The bootstrap paradox has two parts here...

First, though, let me define it in case you are not nerdy about time travel stories. The Quantum Tunnel: Exploring Physics Fact in Science Fiction defines the bootstrap paradox as

The name comes from a Heinlein story called "By His Bootstraps" Drawing on the expression about "pulling yourself up by your bootstraps", the story concerns a man who travels back in time to give his younger self a notebook of translations he has made... Except if he gives that notebook to his younger self, his younger self already has the translations he never had to make. He note "produces" them without having every actually made them. His older self still has that same notebook, and still takes them back in time, but now there is no origin for them.

Where does this watch begin? When was it made? Where was it bought? How does Richard have it? How does Elise have it? Where does it end? The watch, as an obvious metaphor, represents the time loop itself, the central piece of this story. The watch can no more begin or end than time itself can.

I had a thought about the reality within the paradox last night. Imagine this object were something simpler. The Ship of Theseus paradox write small. The question is about the identity of an object whose parts have been replaced one by one. While Plutarch's version is about Theseus' ship, the usual example I've heard is a broom. You have a broom. Its bristles can worn down to much but the handle is still good, so you replace the bristles and you keep using the handle. Maybe you do this a few times, and at some point, the handle needs replacing instead. (Also, you must assume this exercise takes place in a world where brooms are not as disposable as they are today.) At the point you replace the handle, you could argue that your broom is still the same broom. A broom has two basic parts. If one has remained the same, the idea (here, anyway) is that it remains the same broom. You replace the handle, but keep the bristles that have now become part of your broom, the whole thing still remains your broom. 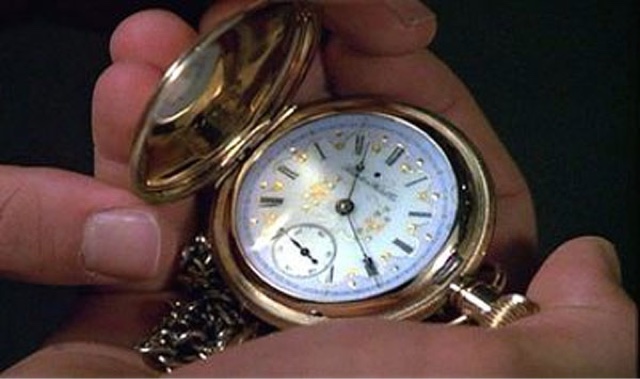 By this standard, the watch would at least not suffer the entropy of a time loop, destroyed by the erosion of time inherent in its bootstrap paradox.

But, what about the other one?

The more important one.

The relationship between Richard and Elise.

Where does this relationship begin? Where does it end? Now, for Richard, the relationship is linear, even if that line is broken across two pieces of the natural flow of time. He meets Elise when she gives him the watch, he obsesses about this woman, he travels through time to find her, they fall in love, he is forced out of her time, he goes catatonic and dies, and Elise waits for him in the afterlife. Similarly, Elise's experience is linear. She meets Richard when he travels back in time, they fall in love, one day he just disappears, and sixty years later, she finds him again, still young as she remembers him, and she gives him back the watch he left behind. She dies that night, and waits for him in the afterlife.

In a different tale--like a couple of my favorite time loop stories, the novel Replay by Ken Grimwood and the film Groundhog Day--we might follow the next resumption of the time loop, and maybe some details would be different. Maybe on this next iteration Richard is a little more confident about going back, is less panicked by arriving in that bickering couple's hotel room back in 1912. Maybe he goes outside to find Elise before he goes into the theater. The Butterfly Effect and all that. Elise hands him the watch a little differently, holds his hand a little more firmly, and he obsesses about her a few years earlier, and now he meets her a few minutes sooner out by the lake. Robinson (Christopher Plummer) interrupts later, the relationship begins differently, with more conversation than before. Maybe this makes a stronger bond earlier between Richard and Elise, and so she finds him before 1972. Maybe she goes to meet Doctor Finney at Milton while Richard is a student there, and she gives him the watch before he's a playwright, which changes the way he approaches her in 1912. He cannot call himself a playwright, so maybe she is less standoffish, maybe Robinson is less jealous, less guarded. So, Richard and Elise bond faster, sooner. Maybe she mentions how his suit is ten years out of fashion before that comfortable moment where Richard disappeared in the previous resumption. And, he is caught more off guard. He doesn't take that moment to celebrate his suit's many pockets, and so he doesn't pull out that penny right then. He doesn't disappear until some other trigger sets him off later. And maybe Elise doesn't have his watch when he disappears this time, so she brings some other object to him when she finds him in the future. Or maybe, because she found him sooner, that particular penny isn't even in his pocket at all.

It can get very complicated if you take the time to contemplate it.

But, what then is the point?

This loop keeps going, forever and forever, even if its pieces are replaced, because that is what the film is telling us--that love is timeless. That romance goes beyond boundaries like time and place.

A cynical viewer might assume that Richard never even goes back in time. That old lady Elise is just enamored by this playwright and she wants to offer him a bit of mystery to perhaps inspire his next play. She gives him an old pocket watch, bids him return to her, except she's never met him before. He appreciates the watch but forgets all about the incident until he happens upon a photograph of a younger woman, an actress, and subconsciously, he recognizes her. There is no timeless recognition, just one notable moment years before come back to him. And why not? He heads out and ends up at the Grand Hotel because he is having trouble writing his latest play. His agent (or producer; the guy is in the film so briefly, I'm not sure what he is) says people are waiting on it. There's pressure. So, he travels. And, he thinks about his big success from eight years ago. Maybe someone at that after party eight years ago even mentioned Elise's name because she was quite famous in her day. They don't mention it to Richard but his subconscious picks up on the name. And maybe he reads something about her a few years later, something about Mackinac Island, the Grand Hotel. And, still more years after that, he is consciously thinking about that first success, and subconsciously, he links it to the watch, links it to the name Elise McKenna, links it to Mackinac Island, the Grand Hotel. And, that is as good a place as any to get away to. And, it is chance that brings him to the photo, simply because he still cannot write, and he is wandering the hotel and its grounds. He finds the photo, the story proceeds as it does in the film until Richard hypnotizes himself, but only into imagining that he is back in 1912, that he is meeting Elise McKenna when she was sixty years younger than she was the night she came to his play and gave him that watch. And, because he is a mad playwright prone to periods of depression, when he wakes from this dream, he imagines it was real, or maybe he realizes that it was not; the absence might still be as strong either way. And, he is without Elise. And he cannot write. And he cannot eat. And he dies, and he imagines Elise McKenna waiting for him in the afterlife.

This version of the story is not as good, of course, because it lacks the power and import in the time travel narrative. (It does account for Elise's enigmatic line upon meeting him in 1912, because it is all in Richard's mind, and he wants their new beginning to be as mysterious as their old one. "Is it you? Is it?" If this is all in his mind, he would play on the role of fate and have her drawn to him as much as he was drawn to her.

Maybe Doctor Finney was quite a popular writer. It's the 1970s. Pet rocks were popular at one point. Why shouldn't philosophical tomes about time travel be? That Elise McKenna read the book over and over and Richard had the author as a teacher is mere coincidence...

But, again, that version of the story is not only cynical but boring, and quite tragic.

There is room for a story like that, to be sure. But, the point of a story like that is to suggest the opposite of what this film does--that love is merely imaginary, that romance is in the eye of the beholder only, and will ultimately amount to nothing.