what are your superpowers, again?

Today, I saw Justice League and Wonder on the big screen. I will not have time for one of my "childhood deconstruction" movies today, even though watching far too many movies seems to be one of my primary skills. Along with writing far too many words about them.

Today, I'm going to a concert, and will be home late. So, no more movies today... even though I could almost fit one in right now.

And, maybe only a few words.

Regarding a recent theme here about humanizing monsters, I was reminded of Super Friends while watching Justice League, and how even the villains had a club... SPOILERS: if you stay after the credits of Justice League you'll see the villains are forming up in the cinematic DCU as well, but it probably won't be as fun. Some good Black Manta and Lex Luthor arguing while Bizarro is perplexed about the plan--the DCU could use something light like that. And, on the heroes' side, we need some Wonder Twins. I remember when DC published some large-format prestige one shots (Superman: Peace on Earth, Batman: War on Crime, Shazam! Power of Hope and Wonder Woman: Spirit of Truth) and as an April Fools Day joke in Wizard magazine, they announced Wonder Twins: Form of Water, and oh how I wanted that book. Superman had tried to solve world hunger, Batman took on something larger than everyday crime, Captain Marvel (in Shazam! for those of you who don't know all your superheroes) had to fight despair, Wonder Woman has to deal with being accepted as a woman, and the Wonder Twins were going to fight drought. And the fake cover was awesome: 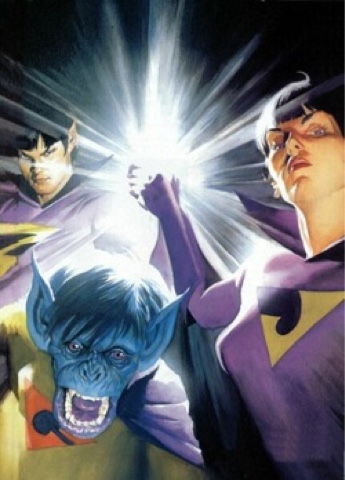 Taking superheroes who were fundamentally ridiculous seriously was right up my alley. But, Zack Snyder has proven with Man of Steel, Dawn of Justice and now (but not as much as he had to leave the film after the death of his daughter) Justice League that taking them too seriously can be problematic. (And, while Christopher Nolan's Batman films may have been pretty good films (at least, The Dark Knight was) but they had their problems as well.)

On the other end of the spectrum of films for today (because you can totally have a spectrum with just two items), Wonder is a cheesy, leaning into schmaltzy, family film that still manages to have enough genuine heart that it mostly works. Structurally, it's got no clue how a film plot works, and no idea how to get to its ending. But, it has its moments.

Together, these films had me leaning into one of my occasional self-help style rants about figuring out who you are and playing into your strengths, or something. But, I'd like to think we all know that, really. We're just scared, or there's some outside force we think is in the way. But, seriously, find what you're good at and do it. (Unless it involved hurting other people, of course.) Find you and do that.

As the cheesy, and barely relevant to the story, teacher in Wonder put up on the blackboard: When given the choice between being right or being kind, choose kind. Cheesy? Sure. But, still good advice.